How Browsers Work: Behind the scenes of modern web browsers - HTML5 Rocks 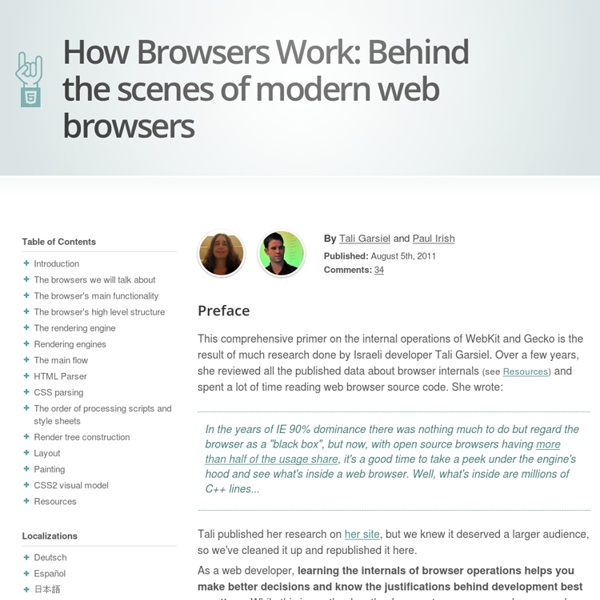 Web browsers are the most widely used software. In this primer, I will explain how they work behind the scenes. We will see what happens when you type google.com in the address bar until you see the Google page on the browser screen. The browsers we will talk about There are five major browsers used on desktop today: Chrome, Internet Explorer, Firefox, Safari and Opera. On mobile, the main browsers are Android Browser, iPhone, Opera Mini and Opera Mobile, UC Browser, the Nokia S40/S60 browsers and Chrome–all of which, except for the Opera browsers, are based on WebKit. The browser's main functionality The main function of a browser is to present the web resource you choose, by requesting it from the server and displaying it in the browser window. The way the browser interprets and displays HTML files is specified in the HTML and CSS specifications. Browser user interfaces have a lot in common with each other. The browser's high level structure The browser's main components are (1.1): if (!

plus-hangout-samples - It's sample code... for Google+ Hangout Apps Starting from scratch is always much harder than modifying already working code. There's nothing like seeing features in action before you try to use them. The Hangout Apps hosted here come in two flavors each with their own intended use. Sample Apps 30+ Search Engine Optimization Techniques You Cannot Miss You completed a web site for your business about three months ago, but you are still not seeing very many people visiting your web site. You do a little research and find that your web site is buried about ten pages deep on all of the major search engines. It seems that you have created a very nice web site, but it is not optimized for search engines, so your page rank is very low. Search engine optimization has become a very large field for many different consultants all over the internet. However the techniques needed to optimize your web site for search engines are not very hard to implement on your web site all by yourself.

The Brain Is Not Computable A leading neuroscientist says Kurzweil’s Singularity isn’t going to happen. Instead, humans will assimilate machines. February 18, 2013 Miguel Nicolelis, a top neuroscientist at Duke University, says computers will never replicate the human brain and that the technological Singularity is “a bunch of hot air.” Submit URLs to Google with Fetch as Googlebot Webmaster Level: All The Fetch as Googlebot feature in Webmaster Tools now provides a way to submit new and updated URLs to Google for indexing. After you fetch a URL as Googlebot, if the fetch is successful, you’ll now see the option to submit that URL to our index.

Media Types Last Updated Registration Procedure(s) Expert Review for Vendor and Personal Trees. Google boss warns of 'forgotten century' with email and photos at risk Piles of digitised material – from blogs, tweets, pictures and videos, to official documents such as court rulings and emails – may be lost forever because the programs needed to view them will become defunct, Google’s vice-president has warned. Humanity’s first steps into the digital world could be lost to future historians, Vint Cerf told the American Association for the Advancement of Science’s annual meeting in San Jose, California, warning that we faced a “forgotten generation, or even a forgotten century” through what he called “bit rot”, where old computer files become useless junk. Cerf called for the development of “digital vellum” to preserve old software and hardware so that out-of-date files could be recovered no matter how old they are. “We don’t want our digital lives to fade away.

Beautiful Background Image Navigation with jQuery In this tutorial we are going to create a beautiful navigation that has a background image slide effect. The main idea is to have three list items that contain the same background image but with a different position. The background image for each item will be animated to slide into place in […] WifiMesh - FreeBSD Wiki FreeBSD 802.11: | WiFi Main Page | A wireless mesh network, sometimes called WMN, is a typical wireless network but using a mesh topology instead. These networks are often seen as special ad-hoc networks since there's no central node that will break connectivity (in contrast with common wireless networks that you have at home/office, where there's a central Access Point). 802.11s is an amendment to the 802.11-2007 wireless standard that describes how a mesh network should operate on top of the existing 802.11 MAC. If you want to know more, check the resources section. You may already know about the Wireless Distribution System, WDS for short, and if you do, just think of 802.11s as the standard that will expand and unite WDS.

Interaction Design Pattern Library - Welie.com Suggest a pattern Have you seen new examples of patterns out there that have not been described on this site? Send me a link to an example and I'll add it to my to-do list. Suggest a pattern Latest comments Form (Lucas Gwadana) How Today's Computers Weaken Our Brain At 10 P.M. on September 22, 1912, Franz Kafka, then a twenty-nine-year-old lawyer, sat down at his typewriter in Prague and began to write. He wrote and wrote, and eight hours later he had finished “Das Urteil” (“The Judgment”). Kafka wrote in his diary, “I was hardly able to pull my legs out from under the desk, they had got so stiff from sitting. The fearful strain and joy, how the story developed before me, as if I were advancing over water.” He later described the one-sitting method as his preferred means of writing. “Only in this way can writing be done, only with such coherence, with such a complete opening out of the body and soul.”

How to Become an SEO Freelancer in 48 Hours EmailShare 376EmailShare I’d like to state up front that this is the longest post I’ve ever written here at Location 180. It’s more representative of the direction I’d like to take the site in the future, and is the culmination of the last year I’ve spent becoming an seo freelancer.If you take a weekend, read the resources provided, practice with your own site(s), you’ll have enough knowledge to lay the ground work of a location independent business. I’ve been getting a lot of emails lately from people who are looking to start working for themselves. Whether it’s a small business on the side, or they’re looking to create a full time location independent business, it’s obvious there’s a lot of entrepreneurial spirit out there.

Hiring the Perfect IT Employee Nothing can screw up a team faster than hiring a bad employee. The focus is often on certifications, degrees, and experience (CDEs). Softer traits like honesty and adaptation are often ignored. Using CSS and HTML in Email Newsletters — Groundwire West Coast firm transfers clients to experts in Plone hosting UPDATE Mar. 12th, 2013: The board at Groundwire asked us to share this official press release (PDF) to help explain what has happened. INDIANAPOLIS, Feb. 1, 2013 - Six Feet Up has acquired 110 Plone hosting clients from a partner in Seattle. Groundwire.org, an agency that helps non-profit organizations with their web strategy and development needs, has decided to exit the hosting business. They determined it was best for their clients to transfer all of their managed web hosting services to Six Feet Up.

As a web developer, learning the internals of browser operations helps you make better decisions and know the justifications behind development best practices. by noeliafranco Jul 16