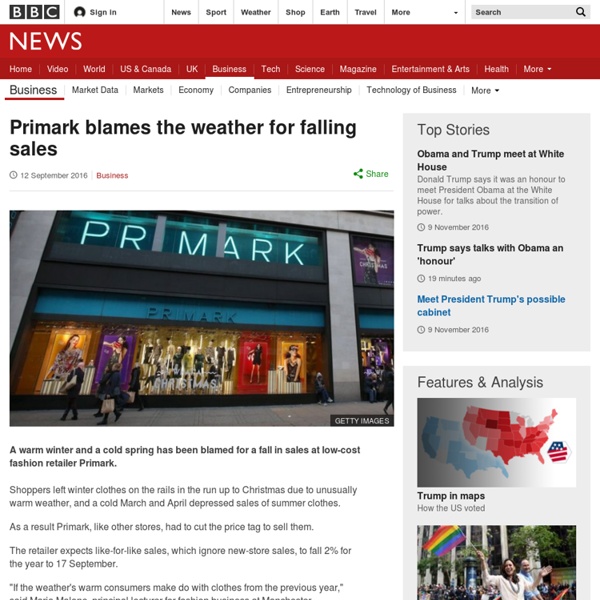 Image copyright Getty Images A warm winter and a cold spring has been blamed for a fall in sales at low-cost fashion retailer Primark. Shoppers left winter clothes on the rails in the run up to Christmas due to unusually warm weather, and a cold March and April depressed sales of summer clothes. As a result Primark, like other stores, had to cut the price tag to sell them. The retailer expects like-for-like sales, which ignore new-store sales, to fall 2% for the year to 17 September. "If the weather's warm consumers make do with clothes from the previous year," said Maria Malone, principal lecturer for fashion business at Manchester Metropolitan University. For retailers like Primark that causes a problem as they source their clothes from the Far East and South Asia and cannot adjust their stock to reflect the weather conditions. "Once stock is on its way you can't turn the ships around," points out Ms Malone. Pound impact Pension deficit

Economy Of Fashion: How Different Trends Reflect The Financial State It's common knowledge fashion is cyclical in nature. The concept of “newness” in fashion doesn't refer to the premiere of a trend, but rather its revival. Why fashion cycles in this manner, however, is less obvious. There are lots of factors at play: cultural trends, politics, celebrity influence. One one of the most surprising factors to influence the cycle of fashion, though, is the state of the global economy. Fast Fashion Is the Second Dirtiest Industry in the World, Next to Big Oil - EcoWatch “The clothing industry is the second largest polluter in the world ... second only to oil,” the recipient of an environmental award told a stunned Manhattan audience earlier this year. “It’s a really nasty business ... it’s a mess.” Since 2011, the Greenpeace Detox campaign has challenged some of the world's most popular clothing brands to eliminate all releases of hazardous chemicals.

Britain Now World's Cheapest Luxury Market LONDON, United Kingdom — In the wake of Britain's vote to leave the EU, which pushed down the value of the pound about 10 percent against the euro, the country has become the cheapest luxury goods market in the world, helping to buoy British luxury labels, at least in the short term, according to new research by Luca Solca, the head of luxury goods at Exane BNP Paribas. "The Brexit vote has made the UK the cheapest market in the world for luxury goods,” Solca told BoF. “A weak British pound will boost travel inflows to the UK, helping British luxury goods players like Burberry, Mulberry and Jimmy Choo." While luxury goods companies are not expected to raise prices in the UK in the coming months — at least until there is more clarity around exactly when and how the country might exit the EU — Britain should see a boost from tourist inflows and spending due to its weakened currency.

How discount retailer Primark has evaded e-commerce Affordable U.K. retailer Primark opened a new 77,000-square-foot department store last week in Boston, introducing the U.S. to its extremely low-cost apparel, accessories and home goods for the first time. It’s also introducing the U.S. to its unique approach to digital: Primark’s products are so deeply discounted, the company refuses to sell them online. John Bason, the chief financial officer of Primark’s parent company, Associated British Foods, has said that e-commerce is “not a profitable avenue.”