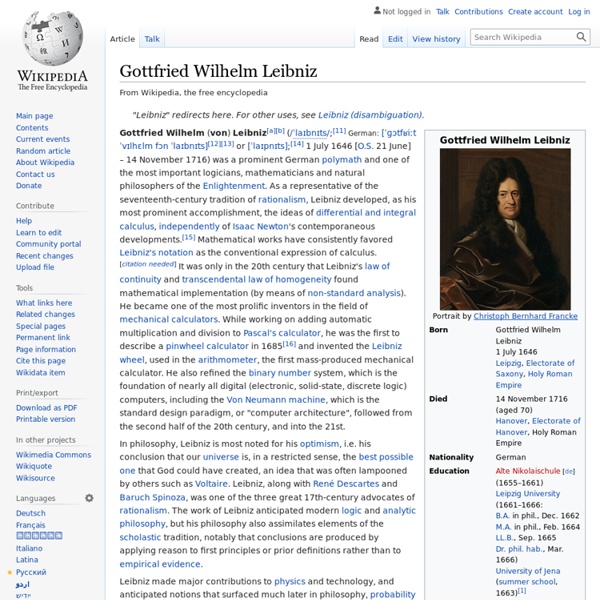 German mathematician and philosopher Gottfried Wilhelm (von) Leibniz[a][b] (;[11] German: [ˈɡɔtfʁiːt ˈvɪlhɛlm fɔn ˈlaɪbnɪts][12][13] or [ˈlaɪpnɪts];[14] 1 July 1646 [O.S. 21 June] – 14 November 1716) was a prominent German polymath and one of the most important logicians, mathematicians and natural philosophers of the Enlightenment. As a representative of the seventeenth-century tradition of rationalism, Leibniz developed, as his most prominent accomplishment, the ideas of differential and integral calculus, independently of Isaac Newton's contemporaneous developments.[15] Mathematical works have consistently favored Leibniz's notation as the conventional expression of calculus.[citation needed] It was only in the 20th century that Leibniz's law of continuity and transcendental law of homogeneity found mathematical implementation (by means of non-standard analysis). He became one of the most prolific inventors in the field of mechanical calculators. Biography[edit] Early life[edit] 21.

Related:  - • what is life? With mind and matter and autobiographical sketches, Erwin Schrodinger • -

Leibniz, Gottfried: Metaphysics The German rationalist philosopher, Gottfried Wilhelm Leibniz (1646-1716), is one of the great renaissance men of Western thought. He has made significant contributions in several fields spanning the intellectual landscape, including mathematics, physics, logic, ethics, and theology. Unlike many of his contemporaries of the modern period, Leibniz does not have a canonical work that stands as his single, comprehensive piece of philosophy. Instead, in order to understand Leibniz's entire philosophical system, one must piece it together from his various essays, books, and correspondences. As a result, there are several ways to explicate Leibniz's philosophy. This article begins with his theory of truth, according to which the nature of truth consists in the connection or inclusion of a predicate in a subject.

www.britannica Leibniz was born into a pious Lutheran family near the end of the Thirty Years’ War, which had laid Germany in ruins. As a child, he was educated in the Nicolai School but was largely self-taught in the library of his father, who had died in 1652. At Easter time in 1661, he entered the University of Leipzig as a law student; there he came into contact with the thought of men who had revolutionized science and philosophy—men such as Galileo, Francis Bacon, Thomas Hobbes, and René Descartes. Pre-established harmony Overview[edit] Leibniz's theory is best known as a solution to the mind–body problem of how mind can interact with the body. Leibniz rejected the idea of physical bodies affecting each other, and explained all physical causation in this way. Under pre-established harmony, the preprogramming of each mind must be extremely complex, since only it causes its own thoughts or actions, for as long as it exists. In order to appear to interact, each substance's "program" must contain a description of either the entire universe, or of how the object is to behave at all times during all interactions which appear to occur. An example:

plato.stanford 1. The Nature and Scope of the Doctrine The doctrine of Vision in God is easily misunderstood. It is not the view that we see God’s essence — that vision in God is vision of God — though Malebranche’s chief critic, the Cartesian Antoine Arnauld, charged that it was. Monadology Text[edit] The first manuscript page of the Monadology The German translation appeared in 1720 as Lehrsätze über die Monadologie and the following year the Acta Eruditorum printed the Latin version as Principia philosophiae.[1] There are three original manuscripts of the text: the first written by Leibniz and overcharged with corrections and two further emended copies with some corrections appearing in one but not the other.[2] Leibniz himself inserted references to the paragraphs of his Théodicée ("Theodicy", i.e. a justification of God), sending the interested reader there for more details.

plato.stanford 1. Life and Works Malebranche was born in Paris on August 6, 1638, one month prior to Louis XIV, and died, also in Paris, on October 13, 1715, six weeks after the great French monarch. Malebranche was one of many children born to his mother, Catherine de Lauzon, the sister of a Viceroy of Canada, and his father, also Nicolas Malebranche, a secretary to Louis XIII. Definition of antinomian in English by Oxford Dictionaries adjective Denoting or relating to antinomians or their beliefs. ‘These beliefs mark the outer limit of diversity in the generally antinomian culture of contemporary American liberalism.’ ‘Accusations of troublemaking and antinomian behaviour ensued, and he found himself under attack.’

plato.stanford 1. Individuals and Worlds In order to explain Leibniz's modal metaphysics—the metaphysics of necessity, contingency, and possibility—we must look first at the foundation of Leibniz's system more generally: his conception of an individual substance. Antinomianism noun a person who maintains that Christians are freed from the moral law by virtue of grace as set forth in the gospel. Origin of antinomian en.m.wikipedia Nicolas Malebranche, Oratory of Jesus (; French: [nikɔlɑ malbrɑ̃ʃ]; 6 August 1638 – 13 October 1715), was a French Oratorian[1] priest and rationalist philosopher. In his works, he sought to synthesize the thought of St. Augustine and Descartes, in order to demonstrate the active role of God in every aspect of the world. Malebranche is best known for his doctrines of vision in God, occasionalism and ontologism. Biography[edit] Early years[edit]

Antinomianism In Christianity, an antinomian is "one who holds that under the gospel dispensation of grace the moral law is of no use or obligation because faith alone is necessary to salvation".[1] Many antinomians, however, believe that Christians will obey the moral law despite their freedom from it. The distinction between antinomian and other Christian views on the moral law is that antinomians believe that obedience to the law is motivated by an internal principle flowing from belief rather than any external compulsion.[2] Examples are Martin Luther's critique of antinomianism and the Antinomian Controversy of the 17th century Massachusetts Bay Colony. Although the term originated in the 16th century, the topic has its roots in Christian views on the old covenant extending back to the 1st century. It can also be extended to any individual who rejects a socially established morality.[1] Few groups, other than Christian anarchists or Jewish anarchists, explicitly call themselves antinomian.

Related:
Related:  -   -  what is life? With mind and matter and autobiographical sketches, Erwin Schrodinger   -  -