What is the future of technology in education? 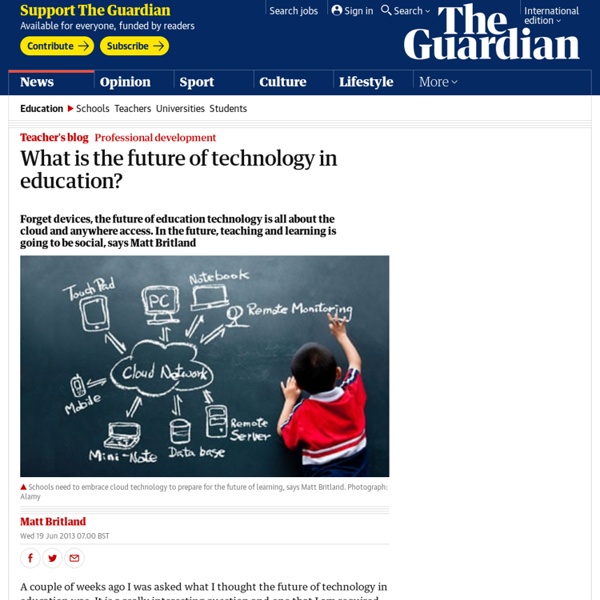 A couple of weeks ago I was asked what I thought the future of technology in education was. It is a really interesting question and one that I am required to think about all the time. By its very nature, technology changes at a fast pace and making it accessible to pupils, teachers and other stakeholders is an ongoing challenge. So what is the future? No, I don't think it is. iPads and other mobile technology are the 'now'. The future is about access, anywhere learning and collaboration, both locally and globally. For me the future of technology in education is the cloud. Technology can often be a barrier to teaching and learning. Schools, will only need one major thing to be prepared for the future. We don't know what the new 'in' device will be in the future. This should be happening now. Teachers can use the cloud to set, collect and grade work online. This is where devices come in. School classrooms are going to change. With the cloud, the world will be our classroom. Related:  ICT issues in popular press • school & education

Why Some Teachers Are Against Technology In Education ShareTwittPin Why Some Teachers Are Against Technology In Education by Terry Heick Some educators are upset. Recently I’ve noticed an increasing number of ed folks enthusiastically question education technology—and do so with enough sarcasm and bitterness and choice language to embarrass their mothers. I’ve been trying to understand it–and note, this isn’t even about whether or not #edtech is good or bad. This has a few net negative effects, among them a kind of permanent momentum where change comes and change goes. Failure is the change. Some observant educators have noticed this trend, and so preach patience and fidelity when integrating critically necessary new thinking—even when, like scripted curriculum or test-based accountability, that thinking is flawed. The Problem With The #edtech Conversation This is a big part of the problem. Further complicating matters is the difficulty of effectively integrating technology in the classroom. Technology Is Designed To Stir Emotions.

Back to the Future Day: A look at our technology in 2045 Some of us are feeling really old today. On November 22, 1989, one of the great all-time geek movies, Back to the Future Part II was released to movie-going audiences. It was a sequel to 1985's hit Back to the Future, but instead of going back in time, Back to the Future Part II came forward, to 2015. In fact, the DeLorean's time circuits were set to October 21, 2015. pinbox It's been almost 30 years since many of sat in the theater, watching Marty McFly discover hoverboards, flying cars, powered shoelaces, and flying news drones. But let's turn that frown upside down and play our own game of Back to the Future. To give you a flavor of Hill Valley in 2045, I turned to many of today's top technology journalists, asked them to put on their Oculus or HoloLens, and peer forward in time. Robots, for those who can afford them For those of us growing up in the pre-Internet days, the big promise of "the future" was flying cars. Technology, for the moment, is born of the human imagination. gallery

notes Five top technology tools for the English classroom | Teacher Network There are many educational technology tools available to use in your English classroom – and they're increasing at a rapid rate. Whether you're a seasoned tech classroom user or new to the idea, below are a few handy tools for you to get your teeth into. It's not an extensive list but these five are easy to use and a good introduction to what's available. Google Drive Google Drive is a free online storage cloud that has Google's version of Word, Powerpoint and Excel built into it. Teachers can help students with the creative writing process by getting them to share their stories as they write so you can feedback live without stopping their creative flow. Edmodo Edmodo is a free social learning platform for students, teachers and parents. It really is a very useful all-round tool. Screen casting There a loads of tools out there that capture your computer or device screen and allow you to record your voice while you do so. YouTube What about creating a channel for your department? Blogging

Technology in Education: An Overview - Education Week Published: February 5, 2016 In this 2015 photo, third grader Iyana Simmons works on a coding exercise at Michael Anderson School in Avondale, Ariz. —Nick Cote for Education Week Technology is everywhere in education: Public schools in the United States now provide at least one computer for every five students. To keep up with what’s changing (and what isn’t), observers must know where to look. There’s the booming ed-tech industry, with corporate titans and small startups alike vying for a slice of an $8 billion-plus yearly market for hardware and software. But a significant body of research has also made clear that most teachers have been slow to transform the ways they teach, despite the influx of new technology into their classrooms. State and federal lawmakers, meanwhile, have wrestled in recent years with the reality that new technologies also present new challenges. What follows is an overview of the big trends, opportunities, and concerns associated with classroom technology.

Future technology: 22 ideas about to change our world The future always feels like it’s running late. Human imagination works harder than human enterprise, but at any given moment, scientists and engineers are redesigning future technology and the world around us in big and small ways. We don’t realise it because we’ve lived through it, but the rate of progress over the last half century has been abnormal – staggering in fields as broad as computing, medicine, communications and materials science. Still, nobody has a personal jetpack that runs on perpetual energy, so the work must continue. Lab-made dairy products You’ve heard of cultured “meat” and Wagyu steaks grown cell by cell in a laboratory, but what about other animal-based foodstuffs? The dairy industry is not environmentally friendly, not even close. Compared with meat, milk isn’t actually that difficult to create in a lab. Beyond that, researchers are working on lab-produced mozzarella that melts perfectly on top of a pizza, as well other cheeses and ice-cream. Green funerals

Classroom of 2020: The future is very different than you think Imagine: you wake up at 9:23 a.m. one September morning in 2020. Your alarm failed to sound and now you're late. But don't fret. Your commute to school consists of carrying your laptop to the kitchen table. When you load today's lecture video you don't see your professor; instead, a classmate appears on the screen. Your classmate uses the word "atavistic" and you pause the lecture to look it up. Story continues below advertisement After a while, your eyes wander to the window. If the above seems like a far-fetched prediction of what a classroom might be like in 2020, you're behind the times. This is the brave new world of higher education, where students teach professors, technology enables digital note-passing and online courses enroll thousands of students. In an era when a student can access more information through her cellphone than a professor can consume in a lifetime, is the university as a physical place obsolete? This is similar to what U of T calls "the inverted classroom."

Coding at school: a parent's guide to England's new computing curriculum Getting more kids to code has been a cause célèbre for the technology industry for some time. Teaching programming skills to children is seen as a long-term solution to the “skills gap” between the number of technology jobs and the people qualified to fill them. From this month, the UK is the guinea pig for the most ambitious attempt yet to get kids coding, with changes to the national curriculum. This has been coming for a while: the new curriculum was published in September 2013 to fanfare within the technology industry. A survey of 1,020 parents of 5-18 year-olds in England commissioned by BCS, the Chartered Institute for IT, found that 60% were unaware or unsure about the changes to the curriculum. Why is this happening? The shakeup of computer studies in schools has been trailed for a while, after criticism from ministers and technology companies of the existing ICT curriculum. There is more to this than jobs, though. “We’re not just trying to encourage people to become developers.

5 Problems With Technology In Classrooms 5 Problems With Technology In Classrooms by TeachThought Staff The main argument for technology in the classroom is that emerging students should be able to apply classroom concepts to daily life, and a large part of daily life revolves around technology. Students today are apt at using technology, and tools such as laptops, smart phones, and tablets are already second nature to them. Likewise, even if the student isn’t already technology-savvy, that’s even more of a reason to embrace the skill. See also How Rapid Technology Change Impacts Your Teaching 1. Not all schools can keep up with the rapidly changing technology. Upgrading equipment is often costly and schools may not have the manpower to handle the equipment. This could be as complex as needing an IT staff to work out potential glitches in the system to hiring teachers with a comprehension for various software instead of teachers that are somewhat less skilled with technology. 2. 3. 4. 5.

Technology Trends in the Classroom - How will future technology change the classroom? | HowStuffWorks To see the future of technology in the classroom -- and how it will change the way classes look -- we should probably start with college. Although we can't predict how technology will change, we can make some assumptions about how it will trickle down. Of course, university students are now almost uniformly armed with laptops. But they also often work with Learning Management Systems like Blackboard to post papers, receive instructions or discuss assignments or lectures. This speaks to a larger trend that technology might lead to in the future. As Dede and Richards point out, our classrooms don't lack content. This idea of customization through digital teaching platforms is interesting, but let's consider some of the actual tools that might be used in the future classroom -- as well as some warnings about how technology might impact education negatively.

Teaching languages with technology: tools that help students become fluent | Teacher Network Young people live their lives through technology: they are the web generation and they are hungry for more. Our challenge is to channel the natural enthusiasm our pupils have for ICT by using it in their everyday lives and embed it purposefully into the modern foreign languages (MFL) classroom. There is great value in incorporating new technologies not as a bolt on or reward, but as an integral part of the process. This allows learners to foster the four c's: communication, creativity, collaboration and critical thinking. ICT lets learners easily draw on authentic resources that promote inter-cultural understanding and interact with virtual peers in real non-fabricated contexts. Publishing students' multimedia outcomes on a blog or wiki gives them a real audience for their work, facilitates peer assessment through commenting and encourages them to raise their standards as a result. Video is another powerful vehicle in and out of the languages classroom.