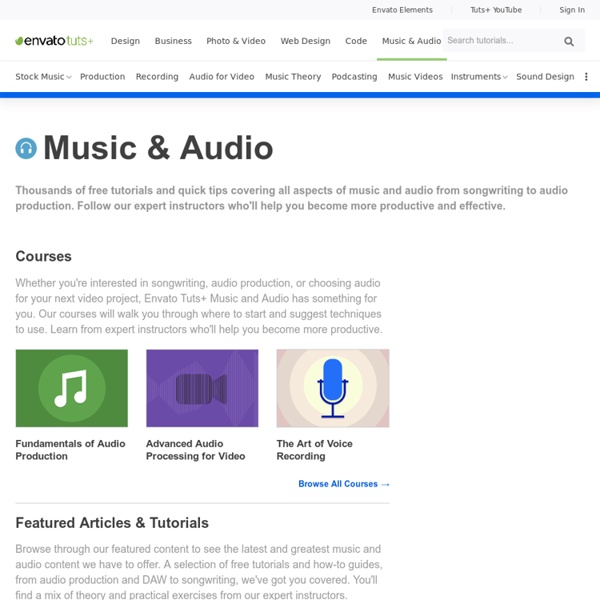 MusicXML MusicXML is an XML-based file format for representing Western musical notation. The format is proprietary, but fully and openly documented, and can be freely used under a Public License.[4] History[edit] MusicXML was developed by Recordare LLC, deriving several key concepts from existing academic formats (such as Walter Hewlett's MuseData and David Huron's Humdrum). Ableton Live, Reason, Logic, Cubase, Pro Tools, FL Studio, DJ Tutorials, Reviews, Previews, Interviews & much more The OpenSound Control Kit Welcome to the home page for the OpenSound Control Kit. Downloads The current version of the OSC Kit is 1.0 Synth Secrets, Part 5: Further With Filters Gordon Reid continues his series on the theory of subtractive synthesis by delving deeper into the amazingly complex world of the analogue audio filter. This is the fifth article in a 63-part series. Read all parts. Last month, we started looking at audio filters, demonstrating (if not proving) that they are also phase-shifters, and therefore mess with your audio signals in more ways than one. In doing so, we skipped over the most important aspect of such devices: their abilities to remove parts of the audio spectrum and create new tones from old. But if you think that this is the easy bit, or that you already know how filters attenuate signals, the chances are that you're wrong (on both counts).

opensoundcontrol.org Open Sound Control (OSC) is a protocol for communication among computers, sound synthesizers, and other multimedia devices that is optimized for modern networking technology. Bringing the benefits of modern networking technology to the world of electronic musical instruments, OSC's advantages include interoperability, accuracy, flexibility, and enhanced organization and documentation. This simple yet powerful protocol provides everything needed for real-time control of sound and other media processing while remaining flexible and easy to implement. Features: Open-ended, dynamic, URL-style symbolic naming schemeSymbolic and high-resolution numeric argument dataPattern matching language to specify multiple recipients of a single messageHigh resolution time tags"Bundles" of messages whose effects must occur simultaneouslyQuery system to dynamically find out the capabilities of an OSC server and get documentation

Harmonic mixing Traditional methods[edit] A commonly known method of using harmonic mixing is to detect the root key of every music file in the DJ collection by using a piano. The root key that fits the track perfectly may be used to create harmonic mash-ups with other tracks in the same key. The root key is also considered compatible with the subdominant, dominant and relative major/minor keys.[1] A more advanced harmonic mixing theory has been proposed which accounts for the various modes as well (aeolian, ionian, lydian, mixolydian, dorian and phrygian).[2] It is shown that these alternate modes can be seen as variations of the traditional major and minor keys, and that they can be translated to traditional keys via the Circle of Fifths. Which notes are in the scale is much more important than which is the tonic, so these can be converted to one mode, such as minor.