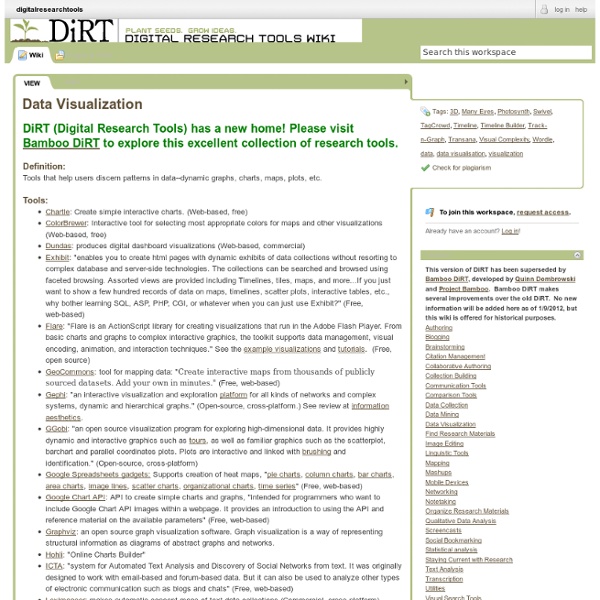 Statistical Visualization For his book The Visual Miscellaneum, David McCandless, along with Lee Byron, had a look at breakups on Facebook, according to status updates. They looked for the phrase "we broke up because" in status updates, and then graphed the frequencies over time. Why they couldn't just look at updates to relationship status, I'm not sure. Notice the peak leading up to the holiday season and spring cleaning.

orgullogay meaning, definition of #orgullogay Tagdef Hashtags near meAdd new Random CourtVision: The Year in Scoring - The Triangle Blog The below graphic shows every shot attempted in the NBA during the regular season. NBA players attempted 201,608 field goals this season; they made 91,282 of them. In other words, the league shot 45.3 percent from the floor. These are pretty standard numbers for a full 82-game season, but there were two noticeable trends in NBA shooting patterns. First, compared to last year’s shortened and condensed season, the league was more efficient on offense.

indiemapper is free - Axis Maps Blog by David Heyman on January 5, 2012 With the start of 2012, we’ve decided to make indiemapper free to use. Since indiemapper launched in 2010, our business has grown and changed to where supporting and maintaining indiemapper is no longer a major part of what we do at Axis Maps every day. We’re making indiemapper free so that it can continue to exist as a useful tool for map-makers while freeing us up to be as awesome as possible at our custom cartography business. To allow us to give it away for free, we’re scaling back what indiemapper does.

Data Visualization: Modern Approaches About The Author Vitaly Friedman loves beautiful content and doesn’t like to give in easily. When he is not writing or speaking at a conference, he’s most probably running … More about Vitaly Friedman … Guavus raises $30M to help telcos do big data at network speed Guavus, a San Mateo, Calif.-based company focused on analyzing network- and other sensor-based data, has raised $30 million in financing from Investor Growth Capital and QuestMark Partners, along with Artiman Ventures, Sofinnova Ventures and Intel Capital. The new investment brings Guavus’s total financing to $78 million since launching in 2006, and comes at a time when mobile providers, especially, are fighting harder than ever to woo (and keep) skeptical customers. In a world of streaming data and lots of it, Guavus’s strategy of analyze first, store later has been paying off. When I spoke with Guavus founder and CEO Anukool Lakhina in May, he said the company was already serving three of the top four mobile and wireline providers. They’re impressed with the platform’s ability to analyze data as it streams in off the network, meaning they can make insights closer to real time rather than waiting for data to write to a disk before querying it.

Hate Map The Geography of Hate is part of a larger project by Dr. Monica Stephens of Humboldt State University (HSU) identifying the geographic origins of online hate speech. Undergraduate students Amelia Egle, Matthew Eiben and Miles Ross, worked to produce the data and this map as part of Dr. Infosthetics: the beauty of data visualization The beauty of information aesthetics: Visual Poetry 06 by Boris Müller. " Boris Müller's newest 'visual theme' for a annual international German literature festival. 2006 the theme consisted of beautiful visualizations of the poetry texts themselves. Each word corresponded to a numerical code by adding the alphabetical values of its letters together. This number was mapped onto the position on a circle, and marked by a red dot. Gray lines connect the dots in the sequence the words appear in the poem. The diameter of the circle on which the dots are placed is decided by the length of the poem," Andrew explains .