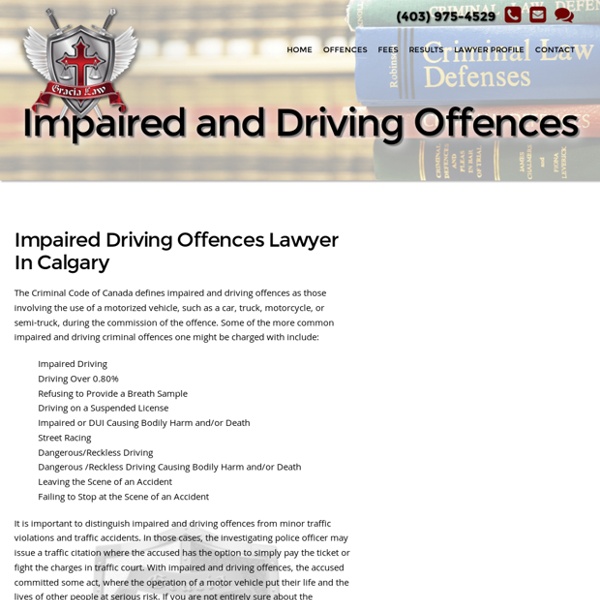 The Criminal Code of Canada defines impaired and driving offences as those involving the use of a motorized vehicle, such as a car, truck, motorcycle, or semi-truck, during the commission of the offence. Some of the more common impaired and driving criminal offences one might be charged with include: Impaired DrivingDriving Over 0.80%Refusing to Provide a Breath SampleDriving on a Suspended LicenseImpaired or DUI Causing Bodily Harm and/or DeathStreet RacingDangerous/Reckless DrivingDangerous /Reckless Driving Causing Bodily Harm and/or DeathLeaving the Scene of an AccidentFailing to Stop at the Scene of an Accident It is important to distinguish impaired and driving offences from minor traffic violations and traffic accidents. In those cases, the investigating police officer may issue a traffic citation where the accused has the option to simply pay the ticket or fight the charges in traffic court. If you or a loved one has been charged with an impaired and driving offence, contact Mr.

Drug Offences Criminal Defence Lawyer Calgary Drug offences are defined under the Criminal Code of Canada and the Controlled Drugs and Substances Act. Drug offences not only involve illegal substances, but also prescription drugs. Some of the more common charges the Crown brings against a person include possession, drug distribution/ trafficking, possession of proceeds from criminal activities, possession for the purpose of distribution and trafficking, drug exportation and importation, and drug production.

Property and Financial Crimes Criminal offences relating to property offences, theft, and financial crimes include white collar crimes, automobile theft, robbery, breaking and entering, cybercrimes, identity theft, arson, shoplifting, beaches of contract, money laundering, and other such crimes are defined under the Criminal Code of Canada. Penalties for such crimes could include fines, probation, imprisonment and travel restrictions. Being charged with one of these offences requires professional and experienced representation from a property and financial crimes lawyer in Calgary. Sexual and indecent acts calgary defence lawyer Sexual and indecent acts offences are a unique classification of criminal offences as defined by the Criminal Code of Canada. These types of offences often involve some form or act of a sexual nature. Keep in mind, for some of these offences, there may not be any form of actual sexual activity, but mere the suggestion of it.

Statutory and Regulatory Violations Statutory and regulatory violations are special types of offences where the accused has violated provincial laws. Most of these offences carry with them penalties in the form of fines. Offenders are normally issued a ticket for violating the act or regulation, like speeding or failing to stop at a red light. Jail time is only considered in cases where the charges are much more serious. Many statutory and regulatory violations are not recorded onto a person’s permanent criminal record, but some other less serious record, like violations of the Traffic Safety Act being recorded against a person’s driver’s license. Violence and Domestic Violence criminal defence lawyer calgary Violent and personal criminal charges range in severity based upon the actual crime. Some of the more common offences, as defined under the Criminal Code of Canada, include: Criminal NegligenceAssaultDomestic AssaultSexual assaultKidnappingUttering ThreatsWeapons and Firearms OffencesHarassmentManslaughter and MurderChild AbandonmentChild AbuseLibel and SlanderHate PropagandaEndangering or Injuring AnimalsAssaulting a Police/Peace OfficerTortureStalkingAccessory After the Fact In most cases, the accused either threatened to cause or actually caused harm to another psychologically or physically. It is important to note threats do not have to be made directly to the other person.

Disorderly Conduct Defence Lawyer Calgary Disorderly conduct criminal offences typically involve an act where the accused is charged with public defiance on some level. The seriousness of the offence could range from a minor charge of disturbing the peace to a more serious charge of inciting a riot. Common disorderly conduct criminal offenses, as defined by the Criminal Code of Canada, include: Common NuisanceResisting ArrestObstructions against a Police/Peace OfficerConspiracyPublic MischiefPerjuryIndecent ActsTrespassingOrganized CrimeAttempting to Commit and OffenceBeing an Accessory to an OffencePersonating a Police/Peace OfficerFabricating and/or Providing False EvidenceEscaping from CustodyAccessory to EscapeVagrancy There are different penalties for pleading guilty to, taking a plea arrangement, or being found guilty of disorderly conduct offences.

Giving Your Lawn a Boost For the Fall Months - Juniper Landscape SD Posted by San Diego Landscaper on Wednesday, 7 September , 2016 It’s hard to believe but the fall months are just around the corner. In this entry, we’ll share tips for ways to keep you lawn healthy and looking good during throughout fall. Breaches of Court Orders Breaches of court orders are a special type of offence as defined under the Criminal Code of Canada. These include agreements made between the court and someone accused of committing some other form of criminal offence that are violated. Oftentimes court orders are part of bail hearing procedures, where the accused agrees to the terms and conditions the court presents in return for their freedom from custody to prepare the defence for their upcoming trial and for one reason or another violates the terms and conditions of bail, resulting in a breach of a court order.

Bring the Wow Factor Through Hardscaping Posted by San Diego Landscaper on Wednesday, 1 June , 2016 While you may not be familiar with the term hardscaping, when utilized effectively, it can really give your yard a powerful wow factor. Hardscaping at a Glance Hardscaping is essentially a term used to describe brick and mortar as it relates to your yard. It includes the installations of pavers, concrete, decks, patios, arbors, driveways, gates, etc. Planning for Hardscaping in Your Yard Drugs Charge(s): CC: s.266 – Assault, s.264.1(1)(a) – Uttering Threats; CDSA: s.4(1) – Possession of Cannibis Resin (hashish) Allegations: My client assaulted his wife in their home while he was intoxicated. He became enraged, was pulling her hair and yelling at her, then punched a hole in the wall beside her.

Let Your Lawn Breath By Aerating It Posted by San Diego Landscaper on Wednesday, 30 March , 2016 We’re all familiar with the importance of fertilizing, mowing and watering our lawns. Another key component to keeping our lawns healthy and looking good is aerating. Just as with fertilizing and mowing, specific timing is needed for your lawn to reap its full benefits.

Disorderly Conduct Charges: CC: s.140(a) – Public Mischief, s.430(3) – Mischief, s.266 – Assault, s.349(1) – Break & Enter a Dwelling and Commit an Indictable Offence, s.145(5.1) – Aid and Abet complainant to Breach his Recognizance. Allegations: My client had two sets of charges. Landscape Design for Water Conservation Posted by San Diego Landscaper on Wednesday, 29 July , 2015 While San Diego is a beautifully landscaped city, it is important to remember that often, especially during hot summer months, drought risk and the need to conserve water is high. With restrictions on water use, how can you maintain a beautiful landscape design without a plentiful source of water? Creative Landscaping Leads to Lower Water Use Creative landscaping can help you conserve water. When the supply of water is limited, you must be creative in your landscaping with the aim of developing ideas that will conserve or reduce the use of water.