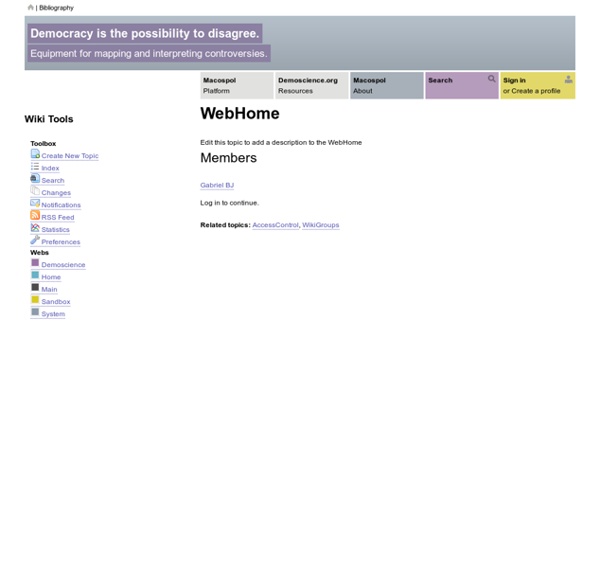 About Lakshmi Rebecca This is Lakshmi Rebecca. Thanks for visiting this page and for the soft corner you’ve got for Chai with Lakshmi! This Online Show is my attempt at Digital Publishing – one that is rooted in India and its urban idiosyncrasies. More about me: Apart from producing, directing, and presenting Chai with Lakshmi, I Anchor events and produce videos for other online publishers. Thanks to everyone who makes this show happen and – in varied ways – influences who I am. Enjoy your #chaitime with one of our webisodes! Lakshmi Rebecca Risk Controversies visualized Last Update: Oct. 5th 2011 New brochure (german version) available online. Download PDF (2MB) The aim of the reseach project is to develop an internet based visualisation of risk related controversies as argumentation maps on the basis of two exemplary case studies: dietary supplements and nanoscale particles. These argumentation maps will be developed by an interdisciplinary research team of sociologists, natural scientists, computer scientists as well as partners and advisors from industry, poltics and academia. The research project is funded by the Federal Ministry for Education and Research (BMBF) within the social ecological research (SÖF) programme "Strategies to Cope with Systemic Risks". Since 2008 the Risk-Cartography is part of the far reaching EU-Project MACOSPOL - Mapping Controversies on Science for Politics .

ToolGoogleScraperFAQ What does the Google Scraper actually do? The Google Scraper is a piece of software which allows one to batch query Google. It allows a user to enter a set of URLs and a set of keywords. I’ve been setting the max number of hits to 1000 but it never seems to hit the maximum Question (continued): ... and I’ve noticed a lot of results in the order of 400-600. Why is the 'number of results per query' set to 100? The Google Scraper has the setting "Number of results per query (max 1000)". What is the difference between 'Retrieved by Google Scraper' and 'Estimated by Google' in the tag cloud output? In the resulting tag clouds one can choose to size the tags by 'Retrieved by Google Scraper' and by 'Estimated by Google'. Is it possible to run multiple scrapes simultaneously? No. Querying hosts and URLs If the box "only query discrete sites" is checked it will search the entire site. I noticed that the tool does not always find the words I’m looking for. How can I verify the query made to Google? No.

Typographic Map Laughing Squid AboutTwitterFacebookHostingContactStore Archive Random RSS Typographic Map of New York City 16th Nov 2010 / 158 notes Founded in 1995 by Scott Beale, Laughing Squid is a blog featuring compelling art, culture & technology, as well as a cloud-based web hosting company. Help support Laughing Squid by hosting your website or WordPress blog with Laughing Squid Web Hosting. Latest Tweets He-Gassen, A Japanese Art Scroll Featuring a Number of People Farting at Each Other Everything But The News Reports on Indiegogo and Crowdfunding Amazing ‘Game of Thrones’ Pop-Up Book That Folds Out to Create a Giant 3D Map of Westeros Bob Bondle Motors: A Handshake for Every Customer! A Simplified Map of Every Interstate and U.S.

wordcloud « Fells Stats An update to the wordcloud package (2.2) has been released to CRAN. It includes a number of improvements to the basic wordcloud. Notably that you may now pass it text and Corpus objects directly. as in: #install.packages(c("wordcloud","tm"),repos=" library(wordcloud) library(tm) wordcloud("May our children and our children's children to a thousand generations, continue to enjoy the benefits conferred upon us by a united country, and have cause yet to rejoice under those glorious institutions bequeathed us by Washington and his compeers." data(SOTU) SOTU <- tm_map(SOTU,function(x)removeWords(tolower(x),stopwords())) wordcloud(SOTU, colors=brewer.pal(6,"Dark2"),random.order=FALSE) This bigest improvement in this version though is a way to make your text plots more readable. Notice how many of the state names are unreadable due to overplotting, giving the scatter plot a cloudy appearance. textplot(loc[,1],loc[,2],states) A big improvement! ... Comparison plot

World Streets : The New Mobility Agenda | 2012 Q1 : Brainstorming the Surprising Future of Equity-based Transport Phoenix Data Project Essays | South America Conference | December 2008 Extremes of wealth and poverty in São Paulo, as is often cited by this image of the Paraisópolis favela sitting cheek-by-jowl to gated complexes of wealthy Morumbi, only partially capture the city’s deep inequality. One of the most iconic views of contemporary São Paulo, commonly used in international publications dealing with the city, is a picture in Morumbi showing the favela Paraisópolis on one side of a wall and a luxury building with tennis courts and one swimming pool per balcony on the other. However, the scholarly literature on the city and several of its main instruments of urban policy insist on another image: one that contrasts a rich and well-equipped centre with a poor and precarious periphery. Undoubtedly, São Paulo has always been a city marked by sharp social inequalities. São Paulo is a complex city that will not be captured by simplistic dual models: neither of the proximity nor of the distance of its opposed social groups.