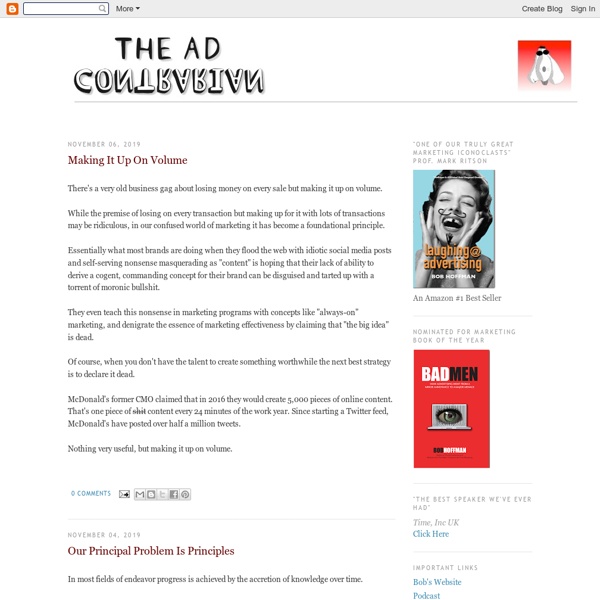 We know that consumer behavior is often irrational. That's why there are large market share differences among products that are essentially the same. We also know that consumers tend to be pragmatic and don't like to throw their money around on crap. That's why so many new products fail. So how do we reconcile these two seeming contradictions? How can consumers be both strangely emotional yet essentially pragmatic?

Separating advertising’s wheat and chaff – Doc Searls – Medium Advertising used to be simple. You knew what it was, and where it came from. Whether it was an ad you heard on the radio, saw in a magazine or spotted on a billboard, you knew it came straight from the advertiser through that medium. The only intermediary was an advertising agency, if the advertiser bothered with one. Seth's Blog We still teach a lot of myths in the intro to economics course, myths that spill over to conventional wisdom. Human beings make rational decisions in our considered long-term best interest. Actually, behavioral economics shows us that people almost never do this. Our decision-making systems are unpredictable, buggy and often wrong. We are easily distracted, and even more easily conned.

Photo Retouching: how to give your portraits a professional makeover Next in our popular Raw Tuesday series we turn our attention to photo retouching. Over the next several weeks, our ultimate guide to photo retouching will show you how to give your portraits a stylish and professional makeover. We’ll show you a range of key photo retouching techniques you can use to make eyes sparkle, how to make perfect teeth and beautiful lips, as well as sculpt body shape and make amazing hair. In our first post, however, we examine the different techniques for one of the most important elements of photo retouching: how to create flawless skin. When it comes to retouching skin, there’s a fine line between flawless and fake.

The best anti smoking ads - Wall to Watch - StumbleUpon This is a collection of the most controversial and convincing anti smoking commercials. Share INMA: Cross-media study shows print advertising has highest ROI Are advertising budgets well spent? In times of economic crisis especially, it is tempting to focus on costs. Media budgets are limited in general, and print advertising in particular is experiencing a considerable decline. Online advertising is flourishing, while TV seems to maintain its share. But what about the return on investment of advertising in these media channels? Is the shift toward online a rational decision? AgencySpy - Inside Your Agency. Deep Inside Bicoastal Arcade Edit has strengthened its roster with the addition of editors Jen Dean and Mark Paiva. Dean joins Arcade Edit from Whitehouse Post, where since 2011 she has honed her skills for brands including Google, New York Times, Cotton, BMW, TJ Maxx and Sprint. She began her commercial editing career under Hank Corwin (Natural Born Killers, Tree of Life) at Lost Planet, where spent almost 12 years. Dean discovered her love of film while studying under legendary experimental filmmaker Stan Brakhage at the University of Colorado. Paiva joins Arcade Edit with over 10 years of experience.

Despre scris Nuts and Bolts: “Thought” Verbs In six seconds, you’ll hate me. But in six months, you’ll be a better writer. From this point forward – at least for the next half year – you may not use “thought” verbs. These include: Thinks, Knows, Understands, Realizes, Believes, Wants, Remembers, Imagines, Desires, and a hundred others you love to use. The list should also include: Loves and Hates. And it should include: Is and Has, but we’ll get to those, later.

The 5 Minute Guide To Cheap Startup Advertising The following is a guest post by Rob Walling. Rob Walling has been an entrepreneur for most of his life and is author of the book Start Small, Stay Small: A Developer's Guide to Launching a Startup. He also authors the top 20 startup blog Software By Rob, that's read by tens of thousands of startup entrepreneurs every month and he owns the leading ASP.NET invoicing software on the market in addition to a handful of profitable web properties. Imagine that you've just completed version 1 of your product and you're preparing for launch.

Advertising: A Lecture by Israel Kirzner - Foundation for Economic Education - Working for a free and prosperous world This article is transcribed from a lecture delivered at FEE in 1971. Advertising has been badly treated by many scholars who should know better. Not only Marxists and liberals, but even conservatives have given advertising a bad press. Let us examine some of the criticisms. First, many advertising messages are said to be offensive — by esthetic or ethical and moral standards. Sallie Krawcheck Should We Care About Diversity This post originally appeared on LinkedIn. Follow Sallie on LinkedIn Ok, I admit it. Katrin Eismann Selecting Detail, Removing Backgrounds A note from Fred: I've promoted Katrin's books many times, and after the 1001st reader asked the "how do I select hair" question and "How do I remove this person from the background?, I decided it was time to get Katrin in here, and have her answer the question correctly once and for good. This is the ultimate tutorial on selection of fine details because it uses no selection tools. It's based on isolation of "values" to let the image itself build your mask. Selection tools are used only for rough selections.