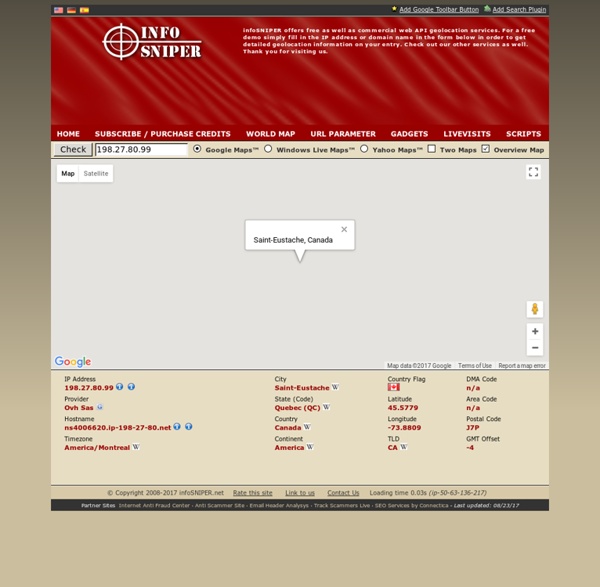 LojiklSweep « Fungusware v6 Direct Download : LojiklSweep (32 Bit) (5106) LojiklSweep (64-Bit) (5573) LojiklSweep is a flexible backup tool that can be twisted and turned, folded and moulded to fit almost any backup task. LojiklSweep was created out of a desire to be able to customize home to medium sized business backup requirements. Something the that we could not manage to find in any other product. All of the LojiklSweep features are available for free, but you will be nagged every so often to purchase a Licence. A paid license helps support further development and hosting costs.

Top 20 Temporary and Disposable Email Services by David Curry on May 27, 2007 Now a days Internet has become a home to spam. Millions of spam bots crawl the web daily to find email addresses and then bombard them with spam emails thus destroying their efficiency and creating problems for users. The best solution to this is to get a temporary or disposable email inbox which automatically expires after a certain time period. Benefits of Temporary/Disposable Mailbox

Exploit writing tutorial part 1 : Stack Based Overflows Last friday (july 17th 2009), somebody (nick)named ‘Crazy_Hacker’ has reported a vulnerability in Easy RM to MP3 Conversion Utility (on XP SP2 En), via packetstormsecurity.org. (see The vulnerability report included a proof of concept exploit (which, by the way, failed to work on my MS Virtual PC based XP SP3 En). Another exploit was released just a little bit later. Nice work. You can copy the PoC exploit code, run it, see that it doesn’t work (or if you are lucky, conclude that it works), or… you can try to understand the process of building the exploit so you can correct broken exploits, or just build your own exploits from scratch.

Free Download for Mobile Antivirus Protection Millions Trust Lookout Download from Google Play Get Lookout for Android Vulnserver Originally introduced here , Vulnserver is a Windows based threaded TCP server application that is designed to be exploited. The program is intended to be used as a learning tool to teach about the process of software exploitation, as well as a good victim program for testing new exploitation techniques and shellcode. What’s included? The download package includes the usual explanatory text files, source code for the application as well as pre compiled binaries for vulnserver.exe and its companion dll file. Running Vulnserver To run vulnserver, make sure the companion dll file essfunc.dll is somewhere within the systems dll path (keeping it in the same directory as vulnserver.exe is usually sufficient), and simply open the vulnserver.exe executable.

Introducing Vulnserver Vulnserver I have just released a program named Vulnserver - a Windows based threaded TCP server application that is designed to be exploited. Why did I write this? All in One – System Rescue Toolkit Lite Looking for the more advanced Technician Version? The All in One – System Rescue Toolkit Lite is designed to be a first response computer repair tool for everyone, not just technicians. It automatically runs several repair steps that should be able to fix many problems commonly found within Windows. Bypassing AntiVirus Detection for Malicious PDFs Introduction Recently I had to get a malicious PDF file past a virus scanner as part of a penetration test, and I thought I would share the process I used to do it. But before I do so, lets get the standard disclaimer out of the way...

CISPA is Back: FAQ on What it is and Why it's Still Dangerous UPDATE (4/22/13): The Cyber Intelligence Sharing and Protection Act (CISPA) has passed the House of Representatives with amendments. This FAQ reflects the bill prior to the amendments. We will be updating this post as we review the bill. In the meantime, please refer to the version of the bill (PDF) that passed the House. The privacy-invasive bill known as CISPA—the so-called “cybersecurity” bill—was reintroduced in February 2013. Just like last year, the bill has stirred a tremendous amount of grassroots activism because it carves a loophole in all known privacy laws and grants legal immunity for companies to share your private information.