Fragrant Nature is an exclusive luxury 4 star resorts lakeside hotels in Kerala offering yoga, massage, Ayurveda Spa is in an idyllic location on the Kerala Backwaters near Varkala and Kollam 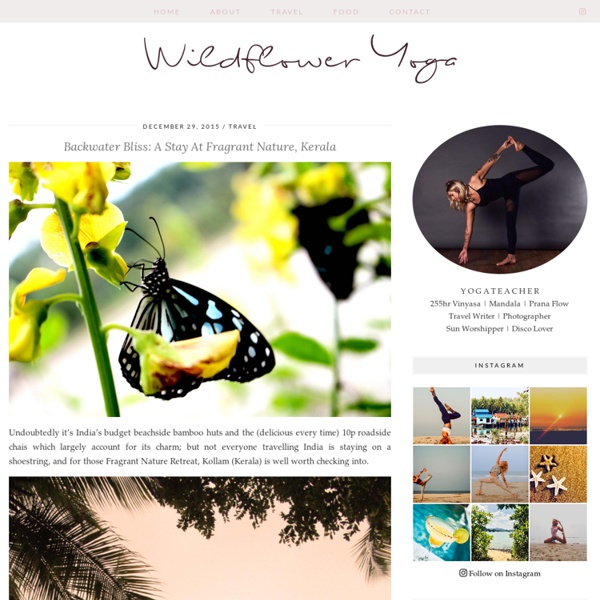 Undoubtedly it’s India’s budget beachside bamboo huts and the (delicious every time) 10p roadside chais which largely account for its charm; but not everyone travelling India is staying on a shoestring, and for those Fragrant Nature Retreat, Kollam (Kerala) is well worth checking into. With second and third sites opening in the stylish Fort Kochi and jungle-deep Munnar in January 2016; Fragrant Nature Retreat is a secluded haven, peacefully overlooking Kerala’s famed backwaters, offering its guests respite in the form of sunrise yoga, Ayeuverdic care, swimming pool, gym, incredible food, riverside bar, restaurant, peddle boats (the best being in the form of a giant swan), and unrivalled sunset views of fishermen towing that day’s catch. At Fragrant Nature I felt the squeakiest clean and most refreshed I’ve felt in months – but the retreat is so much more than that… Each of the staff at Fragrant Nature are exceptional. Bianca Capstick

Taking Your Camera on the Road The Future of Photography In “Where the Photo Industry is Going in Five Years,” Chris Gampat talks about the future of photography. “The industry and the state of technology is evolving or developing so quickly I frankly cannot guess what will be five years from now. I am not certain if you’d asked me this during January 2014 I […] Exploring Tokyo, Japan 10 Best Snacks for a Road Trip You're on the road and it hits you -- not driver fatigue or the need for a bathroom break. We're talking about the powerful hunger of a snack attack. Do you run inside a convenience store for a bag of M&M's and energy drink while you get gas? Or are you a bottle of water and handful of peanuts type of snacker?

Famous Presidential Dogs in American History Some of the most famous residents of the White House have been the president's dogs. According to the Presidential Pet Museum, there have consistently been dogs in the White House from its current canine residents, Sunny and Bo Obama, dating all the way back to 1901. President William McKinley stopped the trend with a double-yellow-headed parrot, Angora kitten, and roosters–but no dogs! Here's an overview of some interesting presidential pups that lived at 1600 Pennsylvania Avenue. President Barack Obama Bo, a Portuguese Water dog, helped President Obama keep a promise to his daughters Malia and Sasha.

10 Tips For Food Photography When Travelling One of the key selling points of any destination is the local food. It plays such an important part in our experience of a new place, and as a result should be a must, on any travel shot list. However, capturing good photographs of food can be incredibly difficult. Professional food photographers will work with stylists to prepare the food, and light it carefully in a studio to ensure it looks natural.

44 Healthy Road Trip Snack Ideas - Wholefully Man, I love a good road trip! Flying is great and all, but there is something really special about packing up the car, cranking up the tunes (or the podcasts), and heading out on the open road. We’ve always been the type that drive instead of fly. Not only is often more affordable for us, but it’s also so much more fun! Do Dogs Really Understand What Humans Say? They've been our closest companions for thousands of years. They live with us, work with us, and even become part of our families, but can dogs understand our words and emotions? For a long time, despite dog parents' claims to the contrary, scientists and other experts believed that when a dog appeared to understand his pet parent, this was merely a combination of learned behavior and the parent projecting human qualities onto the dog.

Fragrant Nature Munnar (Pothamedu, India) - UPDATED 2016 Hotel Reviews - TripAdvisor We're finding you the best rooms at the lowest prices from our partner. Book on Show available rooms for Fragrant Nature Munnar Food for thought: Is India ready for Fast Casual dining? La Ultra - The High is a three-day, 333 km ultra-marathon in the vicinity of Leh, India, is 'One of the most dangerous road races in the world'. Held in August every year, the race attracts a handful of celebrated ultra-marathoners from around the world. These runners are, for most of the part, experienced endurance race enthusiasts, who know their limits, and for some part, runners who try and attempt this distance to ascertain their own. While the race has two more versions - the 111 & 222 km courses, to be attempted in 20 & 48 hours, respectively - it is the 333 km version that has earned it the sobriquet. This is a first-person account of someone from the sidelines, a somewhat unique combination of sponsor-business manager-crew-volunteer for runner, Grant. Proximity to the runners, who arrive with formidable reputations in the Ultra-running world, rubs off on the crew as well.

Make Your Own DIY Collapsible Dog Bowl Adventurous pet parents love to take their faithful companions along for the ride, and a DIY collapsible dog bowl is just the thing to keep your buddy healthy and happy on walks and trips to the park. Lots of water is especially important when the thermostat reaches high temps in the summer. To help your pet cool off, Trupanion recommends you "provide plenty of cool, clean drinking water for your pet so that [he] can stay hydrated throughout the heat."