26 Pictures Will Make You Re-Evaluate Your Entire Existence 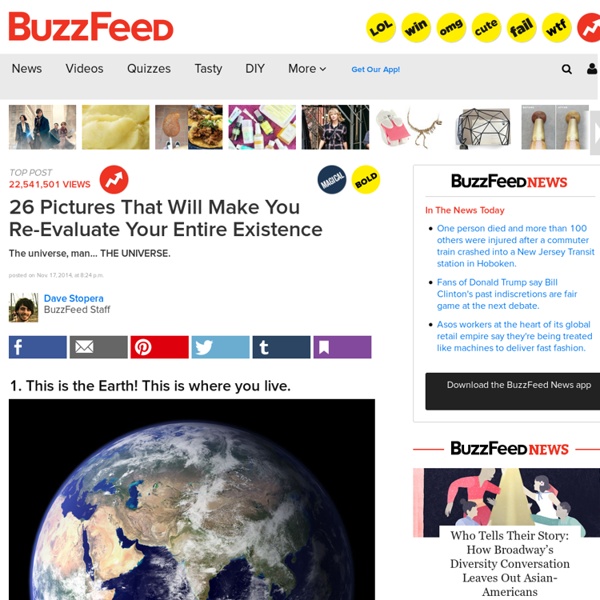 Stare Into The Raging Heart Of The Biggest Sunspot In 24 Years I was wondering the same thing.This maybe: a crack, in the skin of the universe It's actually probably a filament of gas that we are seeing 'side-on,' and is in fact rising far off of the surface of the sun. How The Military Could Turn Your Mind Into The Next Battlefield Actually, the reason I think they won't happen is that most talk of nanotech and cybernetics and such is more science fiction than science fact. Moving forward into the future won't change the laws of physics, and thus won't change the practicality of any technology. Its like the article that ran about comparing 3D printers to Star Trek's replicators. The two technologies aren't comparable, because the Star Trek replicator requires matter teleportation for its mode of assembly, and that breaks known physics. Yet some people make the mistake of thinking that its possible, we just need more time.

Why Anti-Authoritarians are Diagnosed as Mentally Ill (Note: Read Bruce Levine’s latest post: Anti-Authoritarians and Schizophrenia: Do Rebels Who Defy Treatment Do Better? In my career as a psychologist, I have talked with hundreds of people previously diagnosed by other professionals with oppositional defiant disorder, attention deficit hyperactive disorder, anxiety disorder and other psychiatric illnesses, and I am struck by (1) how many of those diagnosed are essentially anti-authoritarians, and (2) how those professionals who have diagnosed them are not. Anti-authoritarians question whether an authority is a legitimate one before taking that authority seriously. Evaluating the legitimacy of authorities includes assessing whether or not authorities actually know what they are talking about, are honest, and care about those people who are respecting their authority.