The Heartbleed Hit List: The Passwords You Need to Change Right Now 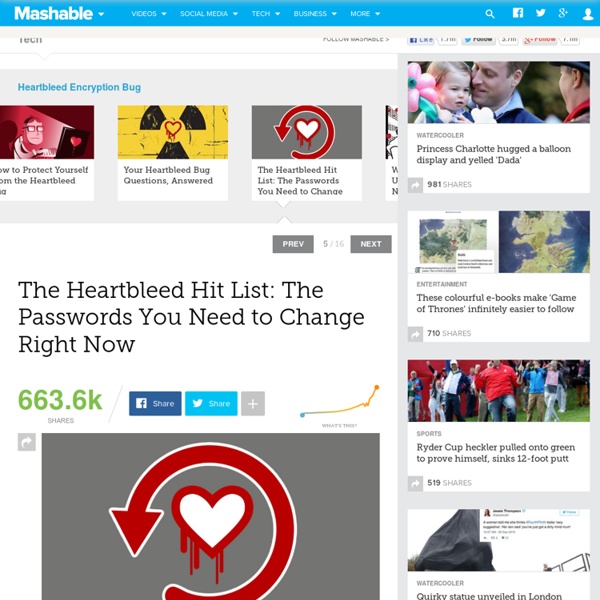 An encryption flaw called the Heartbleed bug is already being dubbed one of the biggest security threats the Internet has ever seen. The bug has affected many popular websites and services — ones you might use every day, like Gmail and Facebook — and could have quietly exposed your sensitive account information (such as passwords and credit card numbers) over the past two years. But it hasn't always been clear which sites have been affected. Mashable reached out to some of the most popular social, email, banking and commerce sites on the web. We've rounded up their responses below. Some Internet companies that were vulnerable to the bug have already updated their servers with a security patch to fix the issue. Although changing your password regularly is always good practice, if a site or service hasn't yet patched the problem, your information will still be vulnerable. We'll keep updating the list as new information comes in. Social Networks Other Companies Email Stores and Commerce Other

Heartbleed will haunt the Internet for years From the instant news of the Heartbleed bug hit the Internet earlier this month, system administrators scrambled to fix a hole in their security that could have allowed hackers to access their encrypted information for years. While most major websites patched their systems almost immediately, there’s a good chance many smaller sites may never take similar measures. In other words, the vulnerabilities created by Heartbleed may plague the Internet for years to come. 10 Social Media Tips for Reaching World Language Learners Feeling outdated, not connected, or even totally lost in the digital age? Well, let me assure you, droning on and on about grammatical structures is a surefire way to quickly lose student interest in the world language classroom. Instead, embrace something which truly interests the millennial student: social media. Utilizing it in the classroom will give your students practical, engaging ways to communicate in the language you teach. The 21st century learner is not wired to memorize; instead, her or she is inclined to create, connect and collaborate. Social media is the perfect medium for us, their teachers, to reach them.

Heartbleed – What Can You Do To Stay Safe? The Heartbleed SSL vulnerability is making headlines around the world – and misreporting in the press and online is causing confusion. How can you stay safe and ensue your personal details aren’t leaked? What Is Heartbleed?

Open SSL developer confesses to causing Heartbleed bug Despite speculation that the Heartbleed flaw was deliberately created by government agencies to spy on us, a developer has now come forward and confessed to causing the problem. German programmer Dr Robin Seggelmann told the Sydney Morning Herald he wrote the code, which was then reviewed by other members and eventually added to the OpenSSL software. He admitted the mistake itself was 'trivial', but added that its effect is 'clearly severe'. The Heartbleed bug lets hackers eavesdrop on supposedly secure communications. It was found by uncovered by a team of researchers from Google Security and Codenomicon in the OpenSSL cryptographic software.

Copyright 4 Educators (AUS) UPDATE: this course is now full. Another cycle will likely be run later in the year. To be notified of the next course offering, please fill out this google form. Who should take this course? Any educator in Australia who wants to learn about copyright, statutory licenses and open educational resources (OER). 10 Reasons Why Handheld Devices Should Be Banned for Children Under the Age of 12 The American Academy of Pediatrics and the Canadian Society of Pediatrics state infants aged 0-2 years should not have any exposure to technology, 3-5 years be restricted to one hour per day, and 6-18 years restricted to 2 hours per day (AAP 2001/13, CPS 2010). Children and youth use 4-5 times the recommended amount of technology, with serious and often life threatening consequences (Kaiser Foundation 2010, Active Healthy Kids Canada 2012). Handheld devices (cell phones, tablets, electronic games) have dramatically increased the accessibility and usage of technology, especially by very young children (Common Sense Media, 2013). As a pediatric occupational therapist, I’m calling on parents, teachers and governments to ban the use of all handheld devices for children under the age of 12 years.

Will changing your password really protect you from Heartbleed? Tech companies are facing increased pressure to do more to reassure their users about the Heartbleed bug. Affected sites, including Google and Facebook, have fixed the problem, but its users are complaining they're still being left in the dark as to what it means for their personal data. Meanwhile, there are still thousands of websites who are yet to fix the problem, or officially announce the fix - leaving their users in limbo. 6 Immediate Strategies For Improving Teacher Morale 6 Immediate Strategies For Improving Teacher Morale by Terry Heick Teacher morale isn’t a popular topic, and that makes sense on the surface. Teachers are professionals, like engineers, doctors, farmers or business leaders, and no one is going out of their way to make sure that engineers are “keeping their head up” or that farmers “feel good about their craft.” Further complicating matters, teachers “get summers off,” and are at the helm of one of the most visibly struggling industries in the United States. Sympathy doesn’t come naturally under these circumstances.

eSchool News The Internet of Things is coming to your school Internet of Things devices are cropping up in schools everywhere. IT is taking note — and so are students After being introduced to the Internet of Things (IoT) by a local software company, Tiffany Davis’ first instinct was to consider what the concept would look like in the K-12 setting. What is Social Engineering? Examples and Prevention Tips Social engineering is the art of manipulating people so they give up confidential information. The types of information these criminals are seeking can vary, but when individuals are targeted the criminals are usually trying to trick you into giving them your passwords or bank information, or access your computer to secretly install malicious software–that will give them access to your passwords and bank information as well as giving them control over your computer. Criminals use social engineering tactics because it is usually easier to exploit your natural inclination to trust than it is to discover ways to hack your software. For example, it is much easier to fool someone into giving you their password than it is for you to try hacking their password (unless the password is really weak).

Ask.fm: The Root of All Evil or a Sign We Need More Social Media Education? I have actively advocated for social media in the education system since August. I have encouraged the use of Twitter and other social networking forums. I have exemplified the benefits of broadcasting student accomplishments on the Internet. Is writing education vital to emerging technology? - eCampus News In an age of technological advancement, it’s easy to feel obsolete. I feel confident that education will always be needed; but, occasionally I wonder if writing education has value in a computer-driven world. Students enter my English classrooms and see the course as a requirement for advancement. They look at is as one of many “basics” they need until they can study their actual interest.

Think you can live off-line without being tracked - here's what it takes Nico Sell, the cofounder of a secure communication app called Wickr, has appeared on television twice. Both times, she wore sunglasses to prevent viewers from getting a full picture of what she looks like. Sell, also an organizer of the hacker conference Def Con, places herself in the top 1% of the “super paranoid.” She doesn’t have a Facebook account. She keeps the device that pays her tolls in a transmission-proof envelope when it’s not in use.