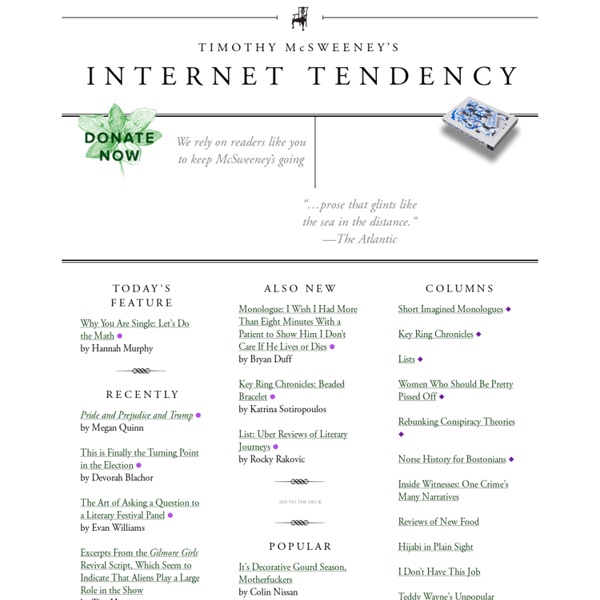 Roundtable - Lapham&#8217s Quarterly Elias Altman Miracles and Manure: Notes on “Revolutions” Tags: introductions, Revolutions, Roundtable, Spring 2014 It's a popular dismissal of revolutions to say that they always end in the tyranny they sought to overthrow. What use is the whole bloody mess if the oppressed becomes the oppressor? Fair enough, but the former tyranny had also ended in tyranny, and holding too dearly to the inevitability hypothesis resembles writing off the project of birth by proving the surety of death. Still, what's in between can be solitary, poor, nasty, brutish, and short, particularly in the early years of a brave new world. Things have to get worse before they get better, we're told. They might also get worse before they stay worse.

Best of 2013: Perfume and Otherwise 2013 was eventful for me - a little more eventful than I tend to like - and it had less to do with perfume than I'd prefer. Still, there were highlights. Precious few, but they peppered the disappointments enough to keep me engaged, if barely. - In November, Andy Tauer and I released the third fragrance in our ongoing collaboration between the characters and stories of the Woman's Picture film series and the line of companion fragrances we created, Tableau de Parfums. It was a summation for us of what we've done the last several years, and an anniversary in many ways - celebrating a creative partnership, a cycle of stories, and a love of perfume and film in general.

Everyday Cute It’s Tommy the Pomeranian - Pusheen style! Requested by Feb 04. 4425 Notes. Oct 30. 92932 Notes. Bonus gif by Emmy Cicierega :) Oct 23. 2645 Notes. Prometheus Movie Discussion Link to Timeline: Welcome to the most expansive timeline of the Alien films available. It is based on the four 20th Century Fox films: Alien, Aliens, Alien 3, and Alien Resurrection, their respective novelisations, and film production information from a variety of sources. Paris Review Daily - Blog, Writers, Poets, Artists - Paris Review Donald Barthelme would’ve been, and should be, eighty-three today. It would be an exaggeration to say that I feel the absence of someone whom I never met—someone who died when I was three—but I do wonder, with something more than mere curiosity, what Barthelme would have made of the past twenty-odd years. These are decades I feel we’ve processed less acutely because he wasn’t there to fictionalize them: their surreal political flareups, their new technologies, their various zeitgeists and intellectual fads and dumb advertisements. Part of what I love about Barthelme’s stories is the way they traffic in cultural commentary without losing their intimacy, their humanity.

Things Could Be Worse I am back and rested from ECCC 2014. Nice to meet so many fine people. This comic-illustration might be of use for those of you who find yourselves in a similar situation wishing to avoid offense. Please visit me at Emerald City Comiccon, table 1214, this weekend! I will have had crumpets & am thus likely to be in good spirits.