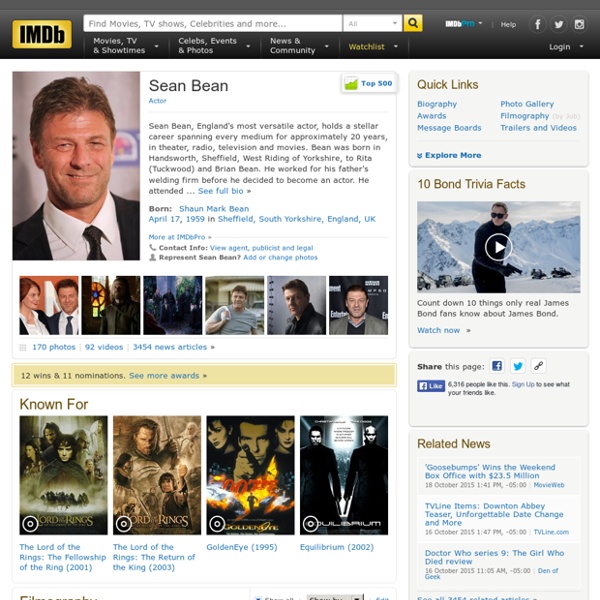 10 Things you probably didn't know about Sean Bean From 1998 to 2008 Sean Bean played Napoleonic soldier Richard Sharpe in 16 episodes of the television series Sharpe, based on Bernard Cornwell’s best-selling novels. Now, in the two part HISTORY series, Sean Bean on Waterloo, the actor draws on actual eye-witness accounts of soldiers who fought in the battle to tell the story of the dramatic events of 18 June 1815. While Sean is busy providing us with gripping information about Waterloo, perhaps we should take a moment to familiarise ourselves with some interesting little known facts about the man himself. 10. Sean Bean was considered for the role of John Smith in Disney's 1995 film Pocohontas but lost out to Mel Gibson. 9.

Does Sean Bean Really Die More Than Other Actors? One does not simply… assume. Actor Sean Bean has been dying over and over again for 20 years. He’s been dropped from a satellite dish in Goldeneye, shot through the neck with a grappling hook in The Island, peppered with arrows in The Lord of the Rings, and decapitated in Game of Thrones.

Sean Bean Insists He's Not In Game of Thrones Season 6 We know that Game of Thrones Season 6 will bring us flashbacks, most prominently a scene at the Tower of Joy that’s being filmed this week at the Castillo de Zafra in Spain. Since the scene at the Tower of Joy involves a young Ned Stark fighting alongside several of his companions against members of Aerys Targaryen’s kingsguard, some are hoping that Sean Bean will return to the show as Ned Stark, the role he played in Season 1 before he, y’know, got decapitated. I mean, sure, it would require Sean Bean to play a younger version of the character even though he’s gotten older, but that didn’t stop Orlando Bloom for playing a younger version of Legolas in the Hobbit movies, and those were set over 70 years before the events of The Lord of the Rings. Compared to that, the time jump on Game of Thrones is child’s play. I applaud the interviewer for getting sneaky with his phrasing.

Sean Bean with fiancée Ashley Moore at the IFTAs By Sharnaz Shahid and Bethany Minelle For Mailonline Published: 00:42 GMT, 25 May 2015 | Updated: 09:34 GMT, 25 May 2015 He has kept his latest relationship on the down low, maintaining a strong desire to keep the romance private. But on Sunday evening, Sean Bean put on a rare public display of affection with fiancée Ashley Moore at the prestigious Irish Film and Television Academy (IFTA) Awards in Dublin. The loved-up couple, who have been together for nearly two years, could not take their eyes off one another as they happily kissed in front of several flashing photographers on the red carpet. Scroll down for video

Famous family trees: Sean Bean 22 July, 2013 Welcome to the latest blog in our ‘famous family trees’ series. In this blog series, experienced family historian, Roy Stockdill, investigates the family histories of the famous, both living and dead. Sean Bean is the subject of Roy’s powers of deduction this month. In the noughties, Sean Bean has been most closely associated with fantasy TV series and films like Game of Thrones, the Lord of the Rings trilogy, Percy Jackson & the Lightning Thief, Mirror Mirror and Silent Hill: Sean Bean Alex Turner is towered over by leggy girlfriend Taylor Bagley By Jj Nattrass For Mailonline Published: 10:03 GMT, 28 August 2015 | Updated: 12:22 GMT, 28 August 2015 He was epitome of chivalry when they jetted out of Los Angeles earlier this week.

Alex Turner: His 35 Greatest Lyrics So Far Over the last decade, Alex Turner has proven himself to be one of Britain's finest lyrical wordsmiths. Here's 35 examples of the Monkey mainman's best work. "Great escape lost track of time and space/ She's a silver lining climbing on my desire" CrazyLittleSecrets.: Weird Beauty Treatments i found this article about some weird beauty treatments.. This is the African Snail Massage. This photo was taken just this march at a salon in Russia. The snail method is believed to help in regeneration of the skin, eliminating wrinkles, scars, and traces of burn marks. Why It's The Perfect Time For Alex Turner And Miles Kane To Revive The Last Shadow Puppets What a pair of teases. Since the release of The Last Shadow Puppets' debut album 'The Age Of The Understatement' back in 2008, Alex Turner and Miles Kane have spent the interim years dangling the carrot of a follow-up but never quite coming through with the goods. In 2009, Kane said the pair were looking to record music that year, while in 2010 he confirmed that they would start recording again after he'd wrapped up his solo record.

Weird Makeup Tricks That Really Work Imaxtree Makeup can be a tricky thing. It takes what seems years to really get your technique down pat, and just when you do, a new trend pops up and you need to learn cosmetics all over again. Luckily, we spend enough time backstage and on-set with makeup artists that we pick up on their weird tricks, and can share them with you. You’ve heard to heat up an eyelash curler before curling your lashes and to apply primer before foundation, but have you heard about these weird makeup tricks that really work? 1.