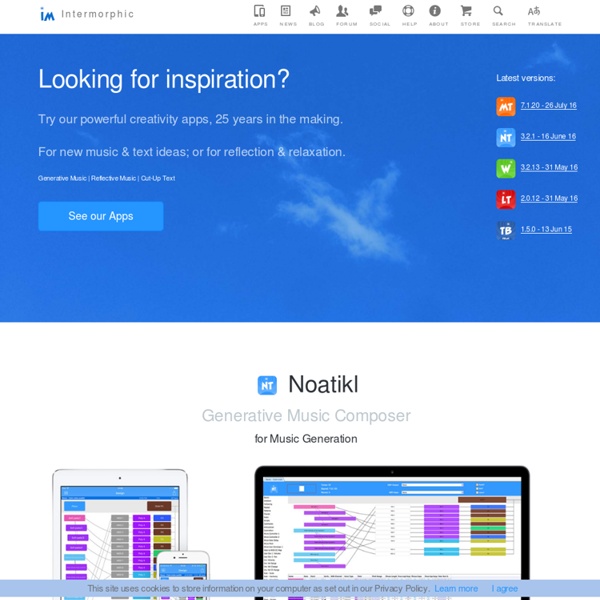 How to Add Websites to the Home Screen on Any Smartphone or Tablet Your smartphone or tablet’s home screen isn’t just for apps. Whatever platform you’re using, you can pin your favorite websites to your home screen so you can quickly access them. Some platforms offer bonus features. For example, Chrome for Android opens these websites in their own windows with no browser interface, while Windows 8 and Windows Phone offer live tile updates on some websites. Android WAV Trigger – robertsonics The Robertsonics/SparkFun WAV Trigger represents an entirely new class of embedded audio player. It inherits the best features of the MP3 Trigger and then goes way beyond. Unlike most other embedded audio players, the WAV Trigger is polyphonic; it can play and blend up to 14 tracks at a time. Each track can start, pause, resume and stop independently, and can have it’s own volume setting, allowing you to create the perfect interactive mix of music, dialog and sound effects.

Nodal - Generative Music Software Download Nodal Current Version Download the free demo to see what you can create with Nodal! What users are saying about Nodal "Nodal is brilliant!" Paper: the next great iPad app, from the brains behind Courier 1inShare Jump To Close Georg Petschnigg throws his hands into the air as he traces the ages of human evolution that led us to develop the fragile wrists we need to use tools. Petschnigg locks his wrist into place and pretends to scribble on an imaginary piece of paper, in the process lamenting the user interfaces we've come to accept from computing platforms. "How do we get back to creating?" Generative music Generative music is a term popularized by Brian Eno to describe music that is ever-different and changing, and that is created by a system. Theory[edit] There are four primary perspectives on generative music (Wooller, R. et al., 2005) (reproduced with permission):

Nearpod Step 1. Go to Nearpod.com to create a Nearpod account. Step 2. Easily Transfer Third Party Movies To Your iPad - WiredPen We’ve started using the iPad to stream movies to the AppleTV so that we can watch them on the big screen. It’s one thing to stream a show we’ve bought from the iTunes store or a clip off YouTube. Those are very straightforward. But what about other (third party) video files? (1) If you have a DropBox account (and time), you can upload the video file (acceptable file types without additional software: .m4v, .mp4, and .mov). Open DropBox on the iPad, click on the video, then trigger AirPlay and select AppleTV.

YAMAHA TG33: Dynamic Vector Synthesis / DASS About YAMAHA TG33 was released in 1990 as the module version of YAMAHA SY22 with doubled polyphony (32). It uses 2-OP FM/PCM hybrid engine with Vector Synthesis. The hybrid engine is called DASS (Dual Architecture Synthesis System). YAMAHA TG33 (1990) I made a new TG33 editor for Emagic SoundDiver to fully edit the Vector and hidden FM parameters. Start Podcasting Podcast is practically series of radio or video shows, music clips and tracks or any other digital media files, which can be subscribed to and downloaded to a computer or portable device over the internet. Adding a podcast player into your blog or site is extremely beneficial and still rather unique. Establishing and embedding a podcast player is simple and fast process, however, maintaining it is even easier.

65 of the Best iOS Apps From 2014 Another year, another great set of new apps that hit the iOS store. As you unwrap your new iPhone or iPad, get these apps installed on your new device! More of an Android person? Check out 60 of the best Android apps launched in 2014. Workflow Hot off the presses, Workflow is a new app that makes it easy to automate processes on iOS. The Top 50 Mac Apps (What’s New To You?) If you own a Mac, you love it. That’s just how it works. While it’s awesome right out of the box, you can add a lot to your Mac experience with some fun, creative, productivity-enhancing and unique apps like those I’ve listed here. If you’re like me, you get a lot of apps for your iPhone or iPad, but not so many for your Mac. Quit Your Job the Classy Way Save up three month’s worth of expenses - Know how much money you need to get by just in case you can't find work for a while. I use mint.com to stick to a budget and identify extraneous spending. For me, the main areas for improvement were unused subscriptions and reminding myself to cook more at home vs. ordering delivery or eating out. New York is a delicious city.

7 Top Sites for Finding Useful iPhone and iPad Applications The iPhone and iPad are the hottest gadgets today and iPhone 4 that just was released will only make iPhone even more popular. One of the best things about the iPhone and the iPad is the huge number of applications available for them. There are literally thousands of iPhone and iPad related applications listed in the App store so how do you filter out the really good ones from the masses. One option that works is to use websites specializing in finding and reviewing great Apps. Some Of The Best Designs Of iPad Apps For Inspiration - 33 Examples An app made for iPad is an app like no other. That’s because apps for iPad are designed specifically to take advantage of all the technology built into iPad. However, not all iPad apps are to be considered well designed.