The use of Silhouettes in Concept Design 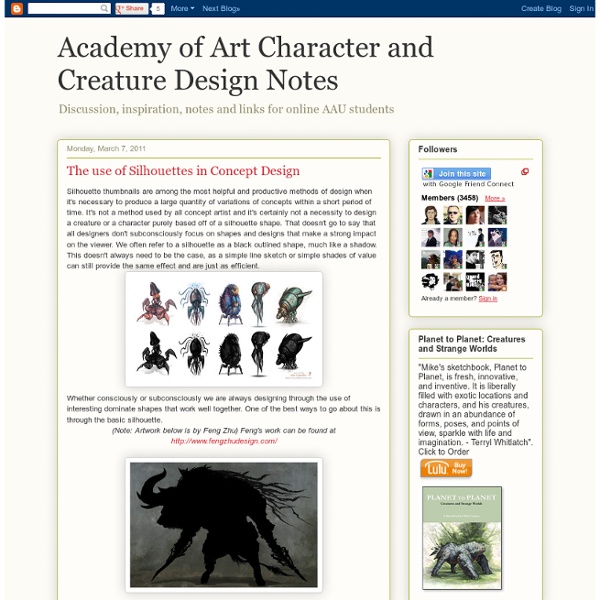 Silhouette thumbnails are among the most helpful and productive methods of design when it's necessary to produce a large quantity of variations of concepts within a short period of time. It's not a method used by all concept artist and it's certainly not a necessity to design a creature or a character purely based off of a silhouette shape. That doesn't go to say that all designers don't subconsciously focus on shapes and designs that make a strong impact on the viewer. We often refer to a silhouette as a black outlined shape, much like a shadow. Whether consciously or subconsciously we are always designing through the use of interesting dominate shapes that work well together. Typically the use of this type of design is a pre-production phase of concept art that is generally only seen by the artist or art director if working on set or in-house. (Note: Designs by Ben Mauro, copyright Sony Pictures Animation) Ben's work can be found at The Art of Ben Mauro Related:  Animation/ CG research • Concept art

Drawing, Sketch, Art & design Welcome to The Computer Graphics Society Pencils, Pixels and the pursuit of Awesomeness By Bryan Tillman Now I want to talk about shapes. I know what you are thinking: Well, I’m glad you asked that question (if you didn’t, you should have). So what do you see here? Stability Trust Honesty Order Conformity Security Equality Masculinity These are the most common things people think about when they see a square shape. Here is an example of a square shape being used in character design. What do you see here? I don’t know how many triangle people or character designs you have seen, but the triangle shape is present in people’s faces. Let’s do one more for good measure. What do you see here? Can you think of some of the meanings behind a circle? Do you see the circle shape in this character’s face? Some students have told me that these meanings aren’t really the focus of a character. Excerpted from Creative Character Design, by Bryan Tillman. © 2011, Elsevier, Inc.

The 33 Most Beautiful Abandoned Places In The World Many people doesn’t know, and didn’t even heard about these famous abandoned places. Many of these places are really something amazing, but they are also really sad when you take a closer look at them. On the folowing list, you can see abandoned planes, abandoned ships, as well as the abandoned houses, and so many other things, that are really amazing and magnificent. 1. 2. 3. 4. 5. 6. 7. 8. 9. 10. 15th century monastery in the Black Forest in Germany 11. 12. 13. 14. 15. 16. 17. 18. 19. 20. 1984 Winter Olympics bobsleigh track in Sarajevo 21. 22. 23. 24. 25. 26. 27. 28. 29. 30. 31. 32. 33. AG Artworks | Ahmed Gamal's artistic portfolio A new angle on parallel languages: the contribution of visual arts to a vocabulary of graphical projection in video games « G|A|M|E It is fair to argue that in the short history of game studies, the concept of graphical projection has not been used in all its dimensions. In a way, we might even say that the idea has been systematically overlooked. Therefore, in order to fully express the potential of graphical projection in game studies, we have to properly define the vocabulary used to describe its various forms. The main idea is to use terms in keeping with the traditional perspectives from which they derive. Out of which tradition—mathematical, scientific or artistic—should we envision graphical projection? If we take, for example, the principle of Albertian perspective, the fundamental idea was more concerned with creating a working tool to coordinate the space of the frame than an artistic or philosophical concept. Indeed, Albertian perspective is a mathematical construct as the perception combines the perfect vantage point (of the artist and the viewer) and the vanishing point (where all lines converge).

How to draw a tree - tree drawing I would like to use one of my own drawing attempts to introduce two of the "tricks" I have learned from others. One of the very convincing tricks is to combine detailed depiction of important areas with unfinished or blank areas. The second one is to illustrate dimensions,proportion and space by the surrounding of the tree. 1.The tree trunk A trunk looks convincing when the viewer sees how the tree grows out of the earth. For that reason I paid particular attention to area at the trunk base. Also the play of shadows thrown by the foliage can add a lot to a drawing especially when it´s combined with marks that emphasize the three dimensional form of a stem. 2. 3.Proportion and space The other trees in the background right and behind the main trees are simply there to illustrate the general form and the proportions between stem and crown as well as the space that they fill.

FZD School of Design (1) Anthropomorphic character design in animation and sequential art: The symbolic use of the animal to portray personality | Tim Jardim 3 |Page character is. On this scale I shall place inanimate objects on one end andhuman beings as the opposite extreme.Examples of inanimate objects include cars, clocks, candlesticks, mechanicalwindup teeth and many other examples that can be found in anythingbetween Saturday morning cartoons and Walt Disney blockbusters. Examples such as Pixar‟s Luxo Jr . and Cars are anthropomorphised inanimateobjects. . the lamps are still undeniably lamps and movein the manner a lamp is expected to move, but they are infused with humanpersonality and emotion in the manner in which they move (Figure 1). Pixar has taken the effect further, building an entire world around these cars,but has also added voices and faces to the characters, linking them evenmore to the humans they represent, and further from the cars they are (Figure2).If we were to move up this proposed scale one might place animals as wesee them in the wild. The Lion King (Figure 3) and Finding Nemo Watership Down