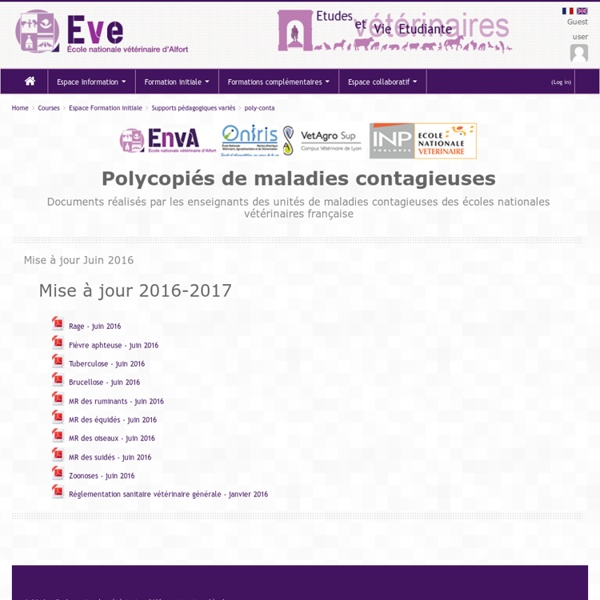 DG SANCO 05-05-2008 Foot-and-Mouth Disease - Educational video - View an educational video on Foot and Mouth Disease Foot-and-mouth disease (FMD) is a highly contagious, usually non-fatal viral disease of domestic and wild cloven-hoofed animals, but may also affect certain other species. It is widely distributed throughout the world. Animals recovered from the disease may remain carriers of the infectious virus for an extended period of time. FMD is not dangerous to humans, but has a great potential for causing severe economic losses in susceptible animals. Causative agent: FMD is caused by a non-enveloped Aphtovirus of the family Picornaviridae, existing in seven distinct serotypes of FMD virus, namely, O, A, C, SAT 1, SAT 2, SAT 3 and Asia 1, most of them with many more subtypes.

MERCK VETERINARY MANUAL - African Horse Sickness: Introduction African horse sickness (AHS) is an acute or subacute, insectborne, viral disease of equids that is endemic to Africa. It is characterized by clinical signs and lesions associated with respiratory and circulatory impairment. Etiology and Epidemiology AHS is caused by an orbivirus, 55–70 nm in diameter, of the family Reoviridae. There are 9 immunologically distinct types. The virus is inactivated at a pH of <6 or ≥12, or by formalin, β-propiolactone, acetylethyleneimine derivatives, or radiation. TRADINGSTANDARDS_GOV_UK - The law regarding the keeping and movement of pigs The law regarding the keeping and movement of pigs Persons keeping pigs for the first time must obtain a county parish holding (CPH) number and then notify Scottish ministers via the Animal Health and Veterinary Laboratories Agency (AHVLA). Pig movements must comply with the 'general licence for the movement of pigs', and must be reported.

EFSA 13/01/15 Scientific Opinion on lumpy skin disease Following a request from the European Commission, the EFSA Panel on Animal Health and Welfare (AHAW Panel) was asked to deliver a scientific opinion on lumpy skin disease (LSD), in order to provide an update on the characterisation of the disease; to assess the risk of introduction into the European Union (EU) and the speed of spread, the risk of becoming endemic and its impact; and to determine if further measures are justified. This request is linked to the recent and important spread of LSD throughout the Middle East, including Turkey, where it is now considered endemic. Regarding disease characterisation, the AHAW Panel reported that LSD is characterised by significant losses, especially in naive and young animals, due to chronic debility, reduced milk production and weight, infertility, abortion and death, but it is not a zoonosis. LSD is endemic in most African countries.

Foot-and-mouth disease Foot-and-mouth disease (FMD) has severe implications for animal farming, since it is highly infectious and can be spread by infected animals through aerosols, through contact with contaminated farming equipment, vehicles, clothing, or feed, and by domestic and wild predators.[1] Its containment demands considerable efforts in vaccination, strict monitoring, trade restrictions, and quarantines, and occasionally the killing of animals. Susceptible animals include cattle, water buffalo, sheep, goats, pigs, antelope, deer, and bison. It has also been known to infect hedgehogs and elephants;[1][2] llamas, and alpacas may develop mild symptoms, but are resistant to the disease and do not pass it on to others of the same species.[1] In laboratory experiments, mice, rats, and chickens have been successfully infected by artificial means, but they are not believed to contract the disease under natural conditions.[1] Humans are very rarely infected.

PARLEMENT EUROPEEN - Réponse à question E-000063-16 EU Pigs Directive For many years the EU Food and Veterinary Office (FVO) has carried out inspections in the Member States on compliance with the provisions of EU Directive 2008/120/EC (the Pigs Directive) concerning environmental enrichment and the ban on tail-docking. It has emerged that a large number of countries still violate the tail-docking ban. Apparently it is only Luxembourg and Sweden which comply fully with the directive’s rules. In spite of repeated representations about this, and in spite of warnings by the European Parliament, the Commission does not appear willing to assume its responsibility and take these countries to the EU Court of Justice. In its past answers to the European Parliament, the Commission has said that it can only take action in cases where the Member States systematically fail to monitor compliance.

PLOS 05/10/16 Validation of a Rapid Rabies Diagnostic Tool for Field Surveillance in Developing Countries Abstract Background One root cause of the neglect of rabies is the lack of adequate diagnostic tests in the context of low income countries. A rapid, performance friendly and low cost method to detect rabies virus (RABV) in brain samples will contribute positively to surveillance and consequently to accurate data reporting, which is presently missing in the majority of rabies endemic countries.

PLOS 23/11/15 Pathogenesis of Primary Foot-and-Mouth Disease Virus Infection in the Nasopharynx of Vaccinated and Non-Vaccinated Cattle Abstract A time-course pathogenesis study was performed to compare and contrast primary foot-and-mouth disease virus (FMDV) infection following simulated-natural (intra-nasopharyngeal) virus exposure of cattle that were non-vaccinated or vaccinated using a recombinant adenovirus-vectored FMDV vaccine. FMDV genome and infectious virus were detected during the initial phase of infection in both categories of animals with consistent predilection for the nasopharyngeal mucosa. A rapid progression of infection with viremia and widespread dissemination of virus occurred in non-vaccinated animals whilst vaccinated cattle were protected from viremia and clinical FMD. Analysis of micro-anatomic distribution of virus during early infection by lasercapture microdissection localized FMDV RNA to follicle-associated epithelium of the nasopharyngeal mucosa in both groups of animals, with concurrent detection of viral genome in nasopharyngeal MALT follicles in vaccinated cattle only.

Acta vet. Scand. 2001, Suppl. 94, 31-42. Disease Surveillance Strategies in Swine Denmark Aim of the monitoring and organisation Isolation of PRRS-virus is notifiable in Denmark. Notification is a prerequisite for export of meat from non-outbreak herds to a few markets. Serological monitoring of herd infection status is compulsory in nucleus and multiplying herds (n = 360), and voluntary in production herds.