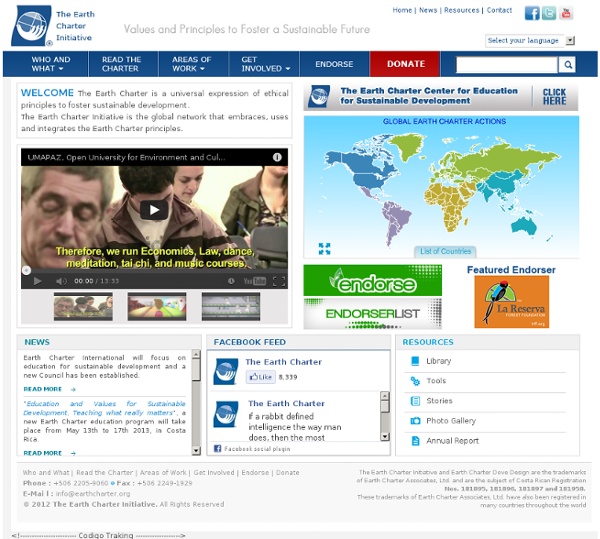 World Population Clock: 7 Billion People World Population: Past, Present, and Future (move and expand the bar at the bottom of the chart to navigate through time) The chart above illustrates how world population has changed throughout history. View the full tabulated data. At the dawn of agriculture, about 8000 B.C., the population of the world was approximately 5 million. Over the 8,000-year period up to 1 A.D. it grew to 200 million (some estimate 300 million or even 600, suggesting how imprecise population estimates of early historical periods can be), with a growth rate of under 0.05% per year.

Los Angeles Stands Up To The Supreme Court, Looks To Revoke Corporate Personhood Billions of corporate dollars have poured into the 2012 Election, all thanks to the Citizens United decision by the conservative members of the Supreme Court. Towns and counties across the country have proposed or passed resolutions against corporate personhood, the most recent of which is Missoula, Montana. But now a major city in America looks to do the same next week. The Los Angeles city council is preparing to vote on a resolution that would revoke corporate personhood. If the council votes accordingly, Los Angeles would become the biggest city in America to strike a blow against Citizens United.

No Impact Project For Educators » No Impact Project Environmental Education Curriculum When Colin Beavan (aka “No Impact Man”) and his family decided to try living for a year in New York City without doing any harm to the environment (the “No Impact Experiment”), it attracted worldwide media attention. Why all the fuss? Because the Beavans traded their old habits for more environmentally-friendly ones – and figured out that doing so actually made their lives happier, healthier, and more abundant. Fracking In Our Backyard : One Percent for the Planet Through our current campaign, Our Common Waters, and with exposure to increased oil and gas development near our homes and communities, we have grown concerned about hydraulic fracturing (commonly called “fracking”) and its impact on water, air, soil, wildlife habitat, and human health. Over 90% of oil and gas wells in the U.S. use fracking to aid in extraction, and many fracking fluids and chemicals are known toxins for humans and wildlife. For decades, natural gas (methane) deposits were tapped by single wells drilled vertically over large, free-flowing pockets of gas. Then came fracking, a water- and chemical-intensive method that promised the profitable extraction of natural gas trapped in shale.

You Can Turn A $2000 Shipping Container Into An Epic Off-Grid Home What if you could spend a fraction of what it would cost to buy or build your own house and instead build a unique home that’s completely off the grid? It can be done, and there are plenty of people who’ve already taken the plunge. Shipping containers exist in a massive surplus and someone like you or I can grab one for around $2,000. From there, you can get your creative juices flowing and build an awesome home, getaway spot, or cottage-like structure on your existing property, provided you have the space. If you’re able to put this baby on wheels, you won’t even need a permit to have it around. Innovative ideas like these are becoming more popular as people seek alternative ways to live modern lifestyles.

Malthusian catastrophe A chart of estimated annual growth rates in world population, 1800–2005. Rates before 1950 are annualized historical estimates from the US Census Bureau. Red = USCB projections to 2025. Rep. Deutch Introduces OCCUPIED Constitutional Amendment To Ban Corporate Money In Politics By Zaid Jilani on November 18, 2011 at 1:00 pm "Rep. Deutch Introduces OCCUPIED Constitutional Amendment To Ban Corporate Money In Politics" Rep. Sustainable development and education in the digital age What is the role of education, open education and online communities in sustainable development? The classical definition of sustainable development is that we should use the global resources only so that the generation coming after us will inherit the planet in as good shape as it was when we were born. We got something from the earlier generations and should past it forward for our children and grant children. Sustainable development is often divided to (1) ecological, (2) economical, (3) social, and (4) cultural sustainability. The different elements of sustainable development are in a close interaction, having an effect on each other.