CAMERA: Committee for Accuracy in Middle East Reporting in Ameri 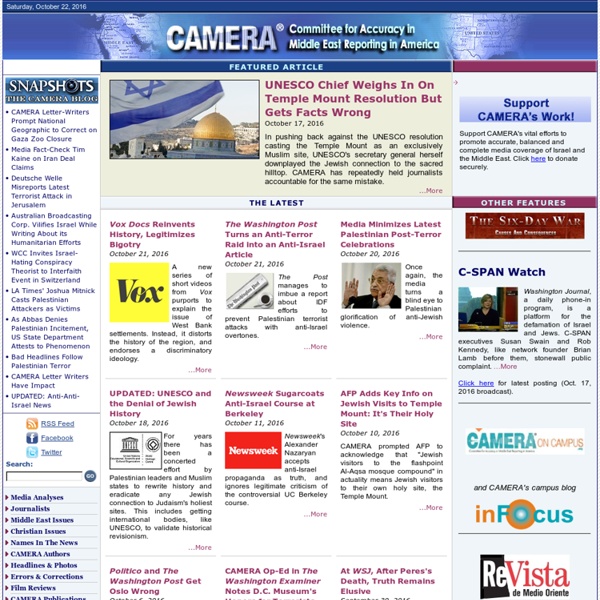 Mass psychosis in the US Has America become a nation of psychotics? You would certainly think so, based on the explosion in the use of antipsychotic medications. In 2008, with over $14 billion in sales, antipsychotics became the single top-selling therapeutic class of prescription drugs in the United States, surpassing drugs used to treat high cholesterol and acid reflux. Once upon a time, antipsychotics were reserved for a relatively small number of patients with hard-core psychiatric diagnoses - primarily schizophrenia and bipolar disorder - to treat such symptoms as delusions, hallucinations, or formal thought disorder. Today, it seems, everyone is taking antipsychotics. It is anything but a coincidence that the explosion in antipsychotic use coincides with the pharmaceutical industry's development of a new class of medications known as "atypical antipsychotics." Not just for psychotics anymore Cost benefit analysis Making patients worse

The Last American Virgin - Wikipedia The Last American Virgin is a 1982 American coming-of-age film, a remake of the Israeli film Eskimo Limon (1978).[2][3] After the success of the original and several sequels, writer/director Boaz Davidson re-teamed with producers Golan-Globus to attempt to re-create the same success in the United States.[citation needed] Davidson decided to change a few key elements from the original. Eskimo Limon was a nostalgia film about kids growing up in 1950s Israel; however the remake was set in then-present-day suburban Los Angeles. The soundtrack was also updated from golden oldies to more contemporary new wave rock. Plot[edit] The plot closely follows the original Israeli film Eskimo Limon (Lemon Popsicle), and revolves around protagonist Gary (Lawrence Monoson), a typical high school student in early 1980s Los Angeles, and his friends Rick (Steve Antin), the slick ladies' man, and David (Joe Rubbo). A love triangle develops between Gary, Rick and Karen (Diane Franklin). Cast[edit] Reception[edit]

Libyan spy files document Qaddafi regime's fall This Sunday, Sept. 4, 2011 photo shows an ransacked desk in Muammar Qaddafi's intelligence headquarters in Tripoli, Libya. Hundreds intelligence documents seen by The Associated Press in Tripoli show how Qaddafi's authoritarian regime using all its means failed to quash an armed rebellion largely fueled by hatred of its tools of control. AP Photo/Ben Hubbard TRIPOLI, Libya - As the uprising grew against Muammar Qaddafi, secret reports from his vaunted intelligence service flowed back to Tripoli. The reports grew more desperate as the Libyan rebellion veered into civil war: Military leaders in the western mountains were disregarding orders; troops in the city of Misrata ran out of ammunition, turning the situation into "every man for himself." These reports and hundreds of other intelligence documents seen by The Associated Press in Tripoli trace how the tide shifted in the six-month uprising that ended Qaddafi's 42-year reign. The note concluded with an offer to kill the council members.

Loyalists enter Niger but no sign of Qaddafi Updated at 3:38 p.m. ET TARHOUNA, Libya - Armed loyalists of Muammar Qaddafi, including his security chief, fled into neighboring Niger in multiple convoys across hundreds of miles of desert on Tuesday. Libya's former rebels — now the country's de facto rulers — claimed the convoys were a major flight by Qaddafi's most hardcore backers from his final strongholds. The claims could not immediately be confirmed. Information on the size of the convoys and who was in them was scarce as they made their way across the vast swath of Sahara — over 1,000 miles — between any populated areas on the two sides of the border. But as the first group of a dozen vehicles pulled into Niger's capital Niamey on Tuesday, a customs official confirmed that it included Mansour Dao, Qaddafi's security chief and a key member of his inner circle, as well as around 12 other Qaddafi regime officials. Three major cities remain under Qaddafi's sway — Bani Walid, Sirte and Sabha. U.S. © 2011 CBS Interactive Inc.

Caroline Glick: A prayer for 5771 « 3rd Circle I’m a big fan of Caroline Glick. So much so that if I was president, I would ask Ms. Glick to be my national security adviser. Ms. In the essay below, I believe she has identified a profound truth that can help us understand some of the deepest currents that are flowing in this time. RJ Jonas Original article at On August 28, Fox News commentator Glenn Beck confounded his colleagues in the media when he brought hundreds of thousands of Americans to the Lincoln Memorial on the National Mall in Washington, DC for a rally he called “Restoring Honor.” While former Alaska governor Sarah Palin was the keynote speaker, the rally was decidedly apolitical. The crowd was enthusiastic but not rowdy. US President Barack Obama was never even mentioned by name. So what was it all about? The American creed has two main components. First, its core belief is that America is an exceptional country and that the American people are an exceptional nation.

Soviet underground music and perestroika The story began in 2008. Former police officer Dmitry Agarkov, who was in his late 30s at the time, was living in the central Russian city of Voronezh when he received a routine credit card offer in the mail. The terms didn’t suit him, but instead of throwing out the contract, he scanned it into his computer, changed the conditions and sent it back to the issuing bank, Tinkoff Credit Systems. Agarkov’s version of the contract had a 0 percent interest rate, no fees and no credit limit. Five years later, in 2013, Tinkoff Credit Systems instigated a claim for unpaid debt against Agarkov for unpaid debt. The former cop became an overnight hero and celebrity for thousands of Russians duped into paying exorbitant fees on unpaid credit due to the notorious small print included in contracts. When a judge sided with Agarkov and declared the contract to be legally binding, requiring Agarkov to pay only the outstanding balance of 19,000 rubles, or just over $600), things began to get ugly.