How your brain sees your body: Meet the cortical homunculus 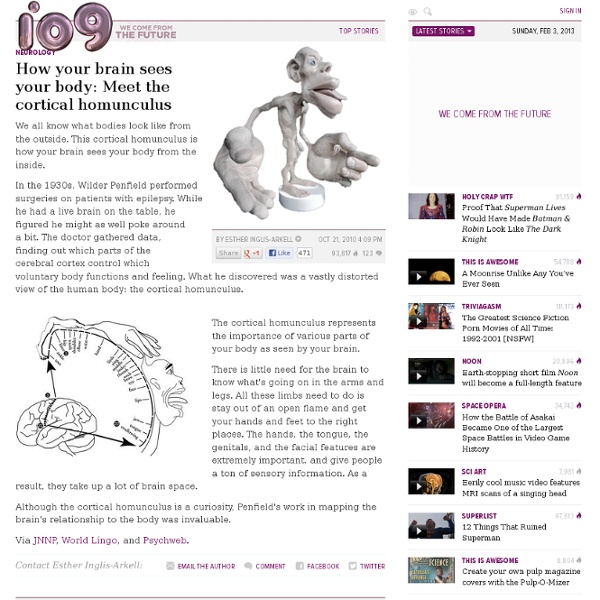 " The hands, the tongue, the genitals, and the facial features are extremely important, and give people a ton of sensory information. As a result, they take up a lot of brain space." So why is the penis not similar size as the other 3 brain-space taking areas on this model? Not focused on the penis you understand, just seems to me this model has been tweaked to make it acceptable than what is accurate. 10/21/10 11:51pm

Smart Guide to 2012: Mapping the human brain - health - 21 December 2011 The Human Connectome Project aims to map the large-scale connections of 1200 human brains and will start reporting data in late 2012 Read more: "Smart Guide 2012: 10 ideas you'll want to understand" Since the 19th century people have speculated that the essence of human identity is stored in the connections between our neurons. Today we have the technology to find out if this is true.

Ten Psychology Studies from 2009 Worth Knowing About - David DiSalvo - Brainspin Image by AFP/Getty Images via Daylife Several great psychology and neuroscience studies were published in 2009. Below I’ve chosen 10 that I think are among the most noteworthy, not just because they’re interesting, but useful as well. 1. If you have to choose between buying something or spending the money on a memorable experience, go with the experience. According to a study conducted at San Francisco State University, the things you own can’t make you as happy as the things you do. The Theatre of Synthetic Realities As i mentioned a few days ago, the Barltett's student show is one of my favourite events of the Summer in London. It is however so overwhelming and turbulent that you need dedication and pure chance to spot the works that might interest you the most. I'm glad my Bartlett expedition led me to The Theatre of Synthetic Realities. The project, authored by architectural designer Madhav Kidao, is miles away from what you'd expect from an architecture work.

Liberalism, atheism, male sexual exclusivity linked to IQ The IQ differences are statistically significant, but experts say the data shouldn't be used to stereotype or make assumptions. Behaviors may stem from desire to show superiority or elitism, which also has to do with IQFor men, sexual exclusivity goes against the grain evolutionarilyNone of this means that humans are evolving toward a future where such traits are the default (CNN) -- Political, religious and sexual behaviors may be reflections of intelligence, a new study finds. Evolutionary psychologist Satoshi Kanazawa at the the London School of Economics and Political Science correlated data on these behaviors with IQ from a large national U.S. sample and found that, on average, people who identified as liberal and atheist had higher IQs. This applied also to sexual exclusivity in men, but not in women. The findings will be published in the March 2010 issue of Social Psychology Quarterly.

Brain waves can cut braking distances, researchers say 29 July 2011Last updated at 09:44 By Judith Burns Science reporter, BBC News Volunteers wearing EEG caps used a driving simulator Tapping into drivers' brain signals can cut braking distances and avoid car crashes, according to scientists. Researchers at the Berlin Institute for Technology attached electrodes to the scalps of volunteers inside a driving simulator. The system detected the intention to brake, and cut more than 3m (10ft) off stopping distances, the team report in the Journal of Neural Engineering.

Does the comfort of conformity ease thoughts of death? - life - 25 February 2011 AS THE light at the end of the tunnel approaches, the need to belong to a group and be near loved ones may be among your final thoughts. So say Markus Quirin and his colleagues at the University of Osnabrück in Germany. The team prompted thoughts of death in 17 young men with an average age of 23 by asking them whether they agreed or disagreed with a series of statements such as "I am afraid of dying a painful death". At the same time, the men's brain activity was monitored using a functional MRI scanner. To compare the brain activity associated with thoughts of death with that coupled to another unpleasant experience, the team also prompted thoughts of dental pain using statements like "I panic when I am sitting in the dentist's waiting room". Although the threat of dental pain is unpleasant, "it's not a threat of death", Quirin says.

How You Feel About Your Illness Can Make You Better or Worse If you are ill what you think about your illness can have just as much impact as what you or your doctor does to treat it. That’s the conclusion of new research by Australian scientists who found there are many factors that affect the course of an illness. The researches suggest that medical conditions, stress levels and the support of our friends and loved ones greatly impacts our health and well-being, particularly when we don’t feel well. In fact, they suggest that what we think about our illness matters just as much if not more than other factors. Perceptions May Play As Important A Roll As Reality People’s perceptions of their illness has a direct relationship to other important health outcomes, they say, including the level at which we function, how we utilize our health care options, how we adhere to recommended treatments suggested by our doctors, and even one’s own mortality.

Weird Wired Science Austrian physician Franz Joseph Gall sought to understand the mind of murderers and other criminals by feeling the outside of their skulls. This practice, which he first used in 1796, later came to be called Now largely discredited, it turned out that neither Gall nor anyone could systematically link the bumps and lumps on the head to any regular patterns of behavior, criminal or otherwise. Psychologists no longer need to use scalp massages as diagnostic tools. They can now look at what's happening inside the skull using one of several types of brain scans.

global scope evaluation and DOM investigation After precedent post I prefer to write another one about global scope evaluation and kentaromiura question: does your evalScript proposal cause DOM side effects? Before I post my test code that shows how a medium or big page, about 5000 divs or paragraphs, is not affected by my proposal (about 0.09 delay over 1000 evalScript interactions) I would talk about global scope evaluation. Is Social Media Spreading Twitching Hysteria? The number of teen patients with twitching symptoms is growing. The condition may be spreading through the Web. Nearly 20 teenagers in upstate New York have come down with a strange twitching disorder. TV Watching Is Bad for Babies' Brains Babies who watch TV are more likely to have delayed cognitive development and language at 14 months, especially if they're watching programs intended for adults and older children. We probably knew that 24 and Grey's Anatomy don't really qualify as educational content, but it's surprising that TV-watching made a difference at such a tender age. Babies who watched 60 minutes of TV daily had developmental scores one-third lower at 14 months than babies who weren't watching that much TV.

Top 10 Thinking Traps Exposed Our minds set up many traps for us. Unless we’re aware of them, these traps can seriously hinder our ability to think rationally, leading us to bad reasoning and making stupid decisions. Features of our minds that are meant to help us may, eventually, get us into trouble. Here are the first 5 of the most harmful of these traps and how to avoid each one of them. 1.