Help us to Transcribe Papyri 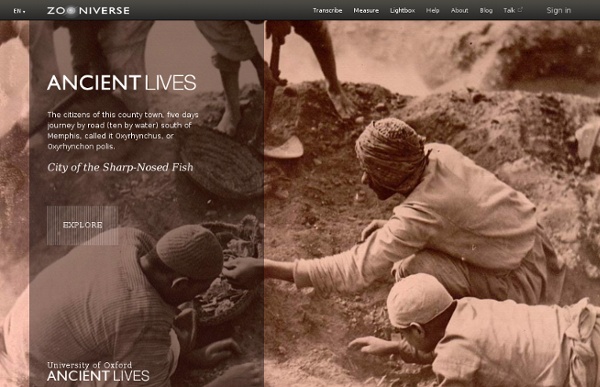 International Big History Association - Home Digital Classicist: index Solve Puzzles for Science | Foldit History and Geography of Europe Aztec Children The lives of Aztec children are fascinating in many respects. To understand how children fit into Aztec culture, and how they were honoured, we should go right back to the beginning... even before the children were born. Birth Since warfare was glorified by the Aztecs, it was even used to symbolize childbirth. A hymn for a new child sung to the goddess of childbirth, found in the Codex Florentino, said: Down there, where Ayopechcatl lives, the jewel is born, a child has come into the world.It is down there, in her own place, that the children are born.Come, come here, new-born child, come here.Come, come here, jewel-child, come here. A soothsayer then came to the home of the newly born child to study the astrological significance of the child's birth, down to the exact day and minute of the child's entrance into the world. Aztec children and their Parents All of the evidence is that Aztec parents loved their children deeply. Chores and school More about classes and society Games and song

Thesaurus Linguae Graecae Maladies, Symptômes, Traitements : Echangez sur Carenity A global movement for localised food and farming: The beginning of agriculture in Europe | TABLE Debates Image: Kelly Reed, Reconstructed Neolithic house at Sopot, Croatia The world we inhabit today has changed dramatically since we first began farming thousands of years ago. Yet the challenge to provide food security to all is not new and has been a common struggle throughout our past. By looking back, we can see how things have developed and use our knowledge to think in different ways and open up new possibilities for the future of our food system. This blog starts at the beginning, when early immigrant farmers moved into Europe from southwest Asia, gradually replacing and assimilating mobile hunter-gatherers who lived in this region. A new sedentary farming lifestyle provided greater control and stability over food supplies, which in turn allowed people to have more children and join together in larger, denser communities. How did the advent of farming change the scale of food production in Europe? Agriculture originated in several small hubs around the world. Domesticated barley crop.

Aztecs for Kids - Daily Life Like nearly all of the ancient civilizations, the rich lived in luxury and the poor worked. In the Aztec civilization, class structure was very important. Homes : The Rich: Homes of the nobles and wealthy were made of sun-dried brick. If you were very wealthy, you home could be made of stone. All homes were whitewashed to make them look clean and shiny. The Poor: Homes of the farmers and other commoners were huts with thatched roofs. Clothing : Upper Class: People in the upper class wore clothing decorated with feathers and embroidery to show their status. Common People: It was against the law for commoners to wear feathers. Marriage : At about age 20, men married women who were ages 14-15. Matchmakers were usually old women. New Babies: The birth of a baby was a really big deal. Correct Behavior : The Aztecs were very concerned that all their citizens behave correctly. Slaves: The Aztec nobles had slaves. Poetry: For all their love of war, the Aztecs had a softer side. Slaves School

Leeaarn, l'université collaborative des entrepreneurs Your Book Review: On The Natural Faculties - Astral Codex Ten [This is the second of many finalists in the book review contest. It’s not by me - it’s by an ACX reader who will remain anonymous until after voting is done, to prevent their identity from influencing your decisions. I’ll be posting about two of these a week for the next few months. When you’ve read all of them, I’ll ask you to vote for your favorite, so remember which ones you liked. - SA] If you’re looking for the whipping boy for all of medicine, and most of science, look no further than Galen of Pergamon. Centuries went by, but not much changed. And so on until the present day. Consider Galen, the second-century physician to Rome’s emperors…Galen was untroubled by doubt. Scott then says, After hearing one too many “everyone thought Columbus would fall off the edge of the flat world” -style stories, I tend to be skeptical of “people in the past were hilariously stupid” anecdotes. This strikes me the same way. I’m also concerned that this criticism doesn’t pass the sniff test.