How Morality Changes in a Foreign Language 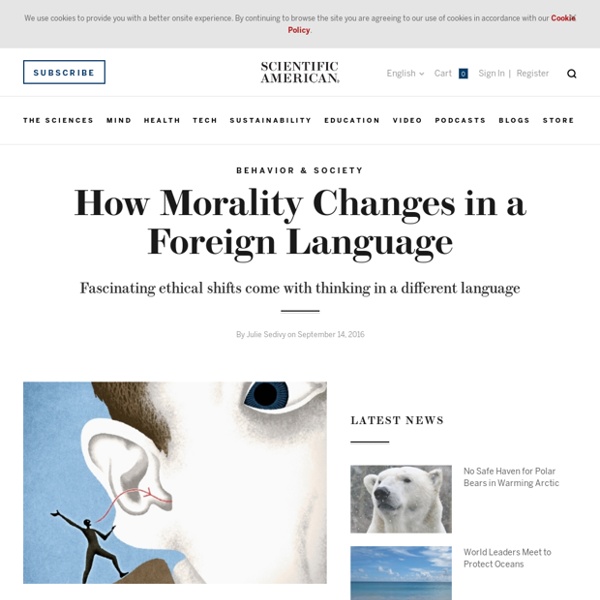 What defines who we are? Our habits? Our aesthetic tastes? Our memories? If pressed, I would answer that if there is any part of me that sits at my core, that is an essential part of who I am, then surely it must be my moral center, my deep-seated sense of right and wrong. And yet, like many other people who speak more than one language, I often have the sense that I’m a slightly different person in each of my languages—more assertive in English, more relaxed in French, more sentimental in Czech. Psychologists who study moral judgments have become very interested in this question. In a 2014 paper led by Albert Costa, volunteers were presented with a moral dilemma known as the “trolley problem”: imagine that a runaway trolley is careening toward a group of five people standing on the tracks, unable to move. Most people agree that they would. Why does it matter whether we judge morality in our native language or a foreign one? What then, is a multilingual person’s “true” moral self?

Everyone Uses Singular 'They,' Whether They Realize It Or Not CSA Images/Vetta/Getty Images Talk about belated recognition. At its meeting in Washington, D.C., on Jan. 7, the American Dialect Society voted to make the 600-year-old pronoun "they" their word of the year for 2015. Small talk topics at dinner parties should be banned What is your relationship with God? What is something you fear in life? These may be great topics for conversations, but we rarely tackle such meaty topics at social gatherings. Instead, our discussions usually centre around summer travel plans, the latest home repair horror story and, of course, the weather. This is a shame, because research has confirmed what most people know but don't practise: surface level small talk does not build relationships and it is not great for our happiness levels.

Elfdalian language, alphabet and pronunciation Elfdalian or Övdalian is a North Germanic language spoken by about 2,500 people in the Älvdalen Municipality (Övdaln) in Northern Dalarna in central Sweden. Elfdalian is considered to be a separate language by some linguists, but many others believe it to be a dialect of Swedish, and it is not recognised as a minority language in Sweden. Elfdalian has developed in relative isolation since the Middle Ages and maintains a number of features of Old Norse not found in other Northern Germanic languages, not even Icelandic. Parents have been spanking children for millennia. 50 years of scientific evi... For 20 years, developmental psychologist Elizabeth Gershoff has been chasing a question: Does spanking actually do a child any good? "As far [back] as we have written records, people have been hitting children," Gershoff tells me. Today, spanking — hitting a child on the buttocks with an open hand — is still incredibly common. A 2015 Pew survey found that 45 percent of parents in the United States have spanked. Given this long history, is it possible that parents throughout millennia — many with the best of intentions — were doing the right thing?

Lost forest language to be taught in Swedish preschool Elfdalian is only spoken in Älvdalen in northern Sweden. Photo: Jonas Ekströmer/TT Elfdalian, a rare Viking language, is getting a revival after local politicians agreed to build a new preschool in Älvdalen, the small forest community that still uses it. While its name might conjure up images from Game of Thrones or Lord of the Rings, Elfdalian is a real language that is believed to date back to Viking times and is in danger of becoming extinct.

‘I Have No Choice but to Keep Looking’ Takamatsu had retired from the Ground Self-Defense Force; he was supposed to begin working as a bus driver that June. Until then, he searched for Yuko every day from morning till evening. Beginning in June, he searched on weekends. On one of his first searches, he made his way by foot to the bank. He traveled carefully across a field of debris. Trains lay twisted on the hillside.

Noam Chomsky on the Evolution of Language: A Biolinguistic Perspective (Image: Lauren Walker / Truthout) Human language is crucial to the scientific quest to understand what kind of creatures we are and, thus crucial to unlocking the mysteries of human nature. In the interview that follows, Noam Chomsky, the scholar who single-handedly revolutionized the modern field of linguistics, discusses the evolution of language and lays out the biolinguist perspective -- the idea that a human being's language represents a state of some component of the mind.

What I Said When My White Friend Asked for My Black Opinion on White Privilege Yesterday, I was tagged in a post by an old high school friend, asking me and a few others a very public, direct question about white privilege and racism. I feel compelled to publish not only his query but also my response to it, as it may be a helpful discourse for more than just a handful of folks on Facebook. Here’s his post: “To all of my black or mixed-race FB friends, I must profess a blissful ignorance of this “white privilege” which I’m apparently guilty of possessing.

Chilcot: Why we cover our ears to the facts Image copyright Getty Images Do people moderate their views when presented with overwhelming evidence to the contrary? Not necessarily, writes Matthew Syed. We like to think that we apportion our beliefs to the evidence. After all, isn't this the hallmark of rationality? Every British swear word has been officially ranked in order of offensiveness Every swear word in the English language has been ranked in order of offensiveness. The UK’s communications regulator, Ofcom, interviewed more than 200 people across the UK on how offensive they find a vast array of rude and offensive words and insults. People were asked their opinion on 150 words in total. These included general swear words, words linked to race and ethnicity, gender and sexuality, body parts and health conditions, religious insults and sexual references, as well as certain hand gestures. They were asked to rate words as mild, medium, strong or strongest.

Hillary Clinton’s Search Results Manipulated by SourceFed, Not Google Google is manipulating Autocomplete search results to help improve Hillary Clinton’s online reputation. SourceFed told the Internet about it, so it must be true. They had screenshots, big words, and talked with their hands.