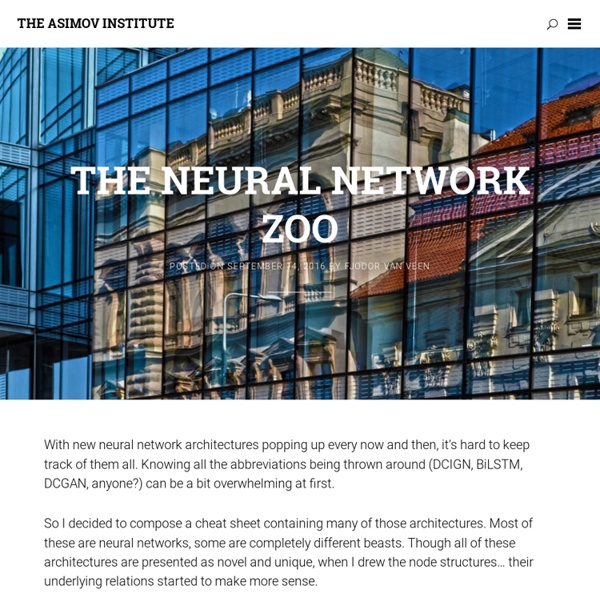 With new neural network architectures popping up every now and then, it’s hard to keep track of them all. Knowing all the abbreviations being thrown around (DCIGN, BiLSTM, DCGAN, anyone?) can be a bit overwhelming at first. So I decided to compose a cheat sheet containing many of those architectures. Most of these are neural networks, some are completely different beasts. Though all of these architectures are presented as novel and unique, when I drew the node structures… their underlying relations started to make more sense. One problem with drawing them as node maps: it doesn’t really show how they’re used. It should be noted that while most of the abbreviations used are generally accepted, not all of them are. Composing a complete list is practically impossible, as new architectures are invented all the time. For each of the architectures depicted in the picture, I wrote a very, very brief description. Rosenblatt, Frank. Broomhead, David S., and David Lowe. Hopfield, John J.

Materials scientists prove 70-year-old tensile deformation prediction Imagine pulling or compressing a block of soft material—like rubber—equally in all directions. You wouldn't expect the block to deform much because of the nature of the material. However, in 1948, an applied mathematician named Ronald Rivlin predicted that with the right amount of tensile force, a thick cube of soft material would suddenly deform into a thin, flat plate. For almost 70 years, this prediction remained purely theoretical. Materials scientists, hoping to add the instability to the pantheon of material functionality, were unable to prove the theory experimentally. Recently, researchers at the Harvard John A.

Artificial Neural Networks: Mathematics of Backpropagation (Part 4) — BRIAN DOLHANSKY No longer is there a linear relation in between a change in the weights and a change of the target. Any perturbation at a particular layer will be further transformed in successive layers. So, then, how do we compute the gradient for all weights in our network? Check Out This New Fleshy Metamaterial for Prostheses, Smiles Scientists from Tel Aviv University have developed a soft, flesh like material that can be “programmed” to produce whatever pattern they would like, according to Haaretz. Of course the first thing they made it do was create a smiley face. The new "soft robot" metamaterial is actually quite simple.

A Neural Network Playground Data Which dataset do you want to use? Features Which properties do you want to feed in? Click anywhere to edit. Fraunhofer tests energy storage in a lake Innovation Researchers from Fraunhofer IWES are putting hollow spheres in Lake Constance to see whether the technology could be used to store offshore wind energy. StEnSEA - Stored Energy in the SEA - is an R&D project investigating a way of storing large amounts of electricity underwater.

Yes you should understand backprop – Andrej Karpathy – Medium When we offered CS231n (Deep Learning class) at Stanford, we intentionally designed the programming assignments to include explicit calculations involved in backpropagation on the lowest level. The students had to implement the forward and the backward pass of each layer in raw numpy. Inevitably, some students complained on the class message boards: “Why do we have to write the backward pass when frameworks in the real world, such as TensorFlow, compute them for you automatically?” This is seemingly a perfectly sensible appeal - if you’re never going to write backward passes once the class is over, why practice writing them? Are we just torturing the students for our own amusement?

Scientists are closing in on turning hydrogen into a metal Like modern day alchemists, scientists are attempting to transform a common element into a precious metal. This isn’t about making lead into gold, but turning elemental hydrogen into a different, never before seen form of hydrogen. Scientists are tantalizingly close to producing the first samples of solid metallic hydrogen using powerful lasers, electrical impulses, and other cutting edge equipment.

A Visual and Interactive Guide to the Basics of Neural Networks – J Alammar – Explorations in touchable pixels and intelligent androids Motivation I’m not a machine learning expert. I’m a software engineer by training and I’ve had little interaction with AI. I had always wanted to delve deeper into machine learning, but never really found my “in”.

Flexible ConFlexPave concrete is tougher, thinner and lighter than conventional mixtures Scientists at Singapore’s Nanyang Technological University have developed a new concrete mixture that is stronger than traditional recipes but also flexible, which helps it reduce skid resistance once installed. The research team behind the cleverly named ConFlexPave say its unique properties mean it could cut installation time in half for new roads, parking lots, and other paved surfaces. The time savings come from the ability to precast slabs of ConFlexPave, which are thinner and lighter than traditional concrete mixtures. The secret to ConFlexPave’s strength and flexibility is the polymer microfiber it contains, which allows the slabs to bend under pressure without cracking. The new concrete was developed by a team working at NTU-JTC Industrial Infrastructure Innovation Centre (I³C) at NTU Singapore. Researchers say the flexible concrete slabs will speed up construction timelines, as well as cut down on maintenance over time, making for a more sustainable product.

How do Convolutional Neural Networks work? pdf [2MB] ppt [6MB] Nine times out of ten, when you hear about deep learning breaking a new technological barrier, Convolutional Neural Networks are involved. Also called CNNs or ConvNets, these are the workhorse of the deep neural network field. They have learned to sort images into categories even better than humans in some cases. This Gorgeous Natural Swiss Pool Proves We Don't Need to Swim in Chlorine Bathing season is in full effect - and we can't imagine anywhere we'd like to swim more than Naturbad Riehen, an all natural, chlorine-free swimming pool in Switzerland. Designed by Herzog & de Meuron, the family-friendly pool features the latest in natural swimming pool design and construction. Landscaping and aquatic systems are used exclusively to clean the water, which creates the feeling of swimming in beautiful, fresh pond rather a swimming pool. Construction began on Naturbad Riehen in 2013 with the full support of Riehen’s residents, who desperately wanted a new swimming pool and elected to go au natural by ditching the chemicals. Herzog & de Meuron originally came up with a design for a swimming pool in 1979, but the idea was shelved for over three decades before the town revisited the idea. This time around, all-natural filtration techniques were available and they became the centerpiece of the design, which provides clean water for 2,000 bathers each day.