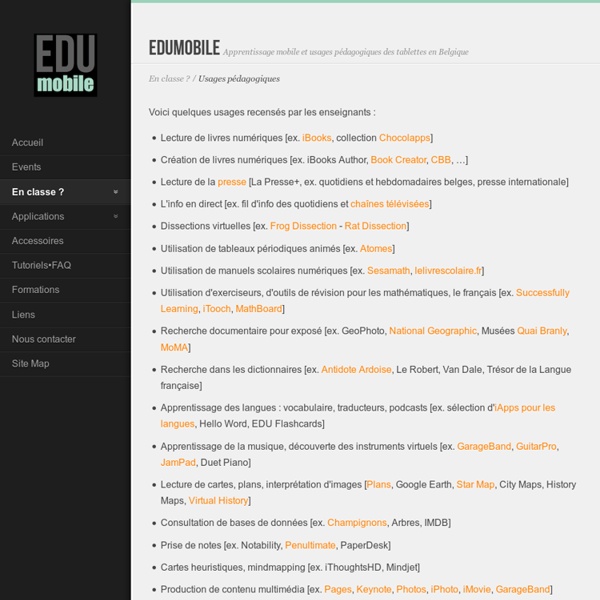 The Thinglink Ripple Effect As we all know, the holidays are a very busy time of year. November felt like it flew by and I didn’t even get a chance to reflect on an amazing mobile conference… iPad Summit. My last post focused on my session “Designing Thinking Around Thinglink”. 7 Apps That Will Help You Use Your iPad For Writing Projects While each of us has our own particular needs, I’m sure one or more of these apps will serve your needs. So get ready to set up a folder on your tablet and download a useful collection of resources. Evernote At the top of the list, the popular Evernote app (iTunes Store Link) and web syncing service is an essential tool for writing on the iPad. You can throw in all kinds of text based files, as well as photos and audio notes, into Evernote which will automatically sync all your notes to your iPad, as well as your Mac or PC.

10 Apps for Teachers You Should Know About! We recently published a blog post with 12 of the Best Apps for Students which has helped a lot of our students get out of bed in the morning, stay focused and more. However, educational technology is not just for students; teachers can also benefit greatly from the use of new technologies. So this week we’ve scoured the net looking for the top 10 apps for teachers. PrometheanPlanet There's a lot of talk in the education sector of Bring Your Own Device (BYOD) initiatives and I've recently taken an interest in how tablets, such as iPads, can be used in the classroom. Back in June, I went to the ISTE 2011 conference with several goals in mind, but one of them was to find the answer to this question: What can I do with an iPad in an ActivClassroom? (Although other tablets are available, I was particularly interested in the iPad as that's the one I have!) I had several ideas, but wanted to verify them for myself.

23 iPad Alternatives to the Book Report. EmailShare 1136EmailShare Upon hearing that they will have to read another book students usually roll their eyes and moan in disagreement. So to make the reading process more fun for them we let them chose their own book and their own creative assignment. Blooms and iPad Applications I just got tweeted a nice diagram showing iPad applications against different levels of Bloom’s revised taxonomy. Its a good and well considered diagram and I like it. Some applications there that I haven’t seen yet and I will have to look up.

Integrate iPads Into Bloom's Digital Taxonomy With This 'Padagogy Wheel' You’re going to want to turn on your printer and fire up a PDF viewer. This is just that good. It’s called the Padagogy Wheel and it offers a fantastically useful perspecitve on how to figure out which iPad apps work with Bloom’s Digital Taxonomy.