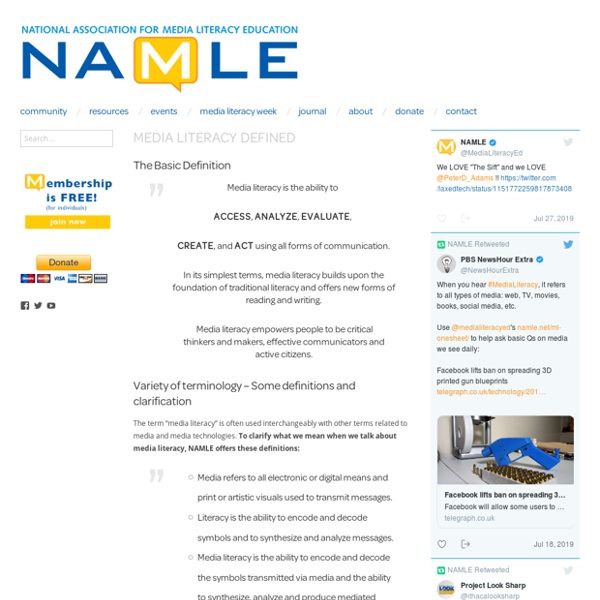 Special Report: The Changing Face of Literacy There has never been a generation of young people more immersed in digital media than this one, many of whom learned to use a mobile device before they even started school. This special report examines how literacy instruction is changing in the digital age, from learning to sound out words in elementary school to grappling with “Macbeth” in high school. It finds that, while experts quibble over what it means to be digitally literate, they agree on one thing: even the youngest children should be learning literacy with a mix of print and digital texts.

Beers & Probst: Responsible Reading and Fake News By Kylene Beers & Robert Probst How do we teach kids across the grades to read responsibly? Close attention to an author’s words – the responsibility a reader shows to the text – implies and requires a responsibility to oneself as well as the words on the page. That responsibility consists not only of a willingness to acknowledge and defend one’s own thoughts and values, but to change our thinking when evidence or reason dictates. A second grader, who read a text about the critical importance of bees in the food chain, adamantly contended, “I don’t like bees because they sting. We don’t need them.”

Media Literacy Fundamentals What is Media Literacy? Media are powerful forces in the lives of youth. Music, TV, video games, magazines and other media all have a strong influence on how we see the world, an influence that often begins in infancy. Bias already exists in search engine results, and it’s only going to get worse The internet might seem like a level playing field, but it isn’t. Safiya Umoja Noble came face to face with that fact one day when she used Google’s search engine to look for subjects her nieces might find interesting. She entered the term “black girls” and came back with pages dominated by pornography.

Fake News: Recommendations - Media Literacy Clearinghouse If you read any news story about “fake news” in the past 18 months, you no doubt came across the phrase “media literacy.” From the various news stories and blog posts, I have compiled the following recommendations and advice. (NOTE: lesson plans, handouts and related videos are posted near the bottom of this list) Newest materials are posted last.

Media Literacy Skip to contentSkip to navigation National Council for the Social Studies Search form Media Literacy Social Education May/June 2016 NCSS Position Statement The End of Reality In a dank corner of the internet, it is possible to find actresses from Game of Thrones or Harry Potter engaged in all manner of sex acts. Or at least to the world the carnal figures look like those actresses, and the faces in the videos are indeed their own. Everything south of the neck, however, belongs to different women. An artificial intelligence has almost seamlessly stitched the familiar visages into pornographic scenes, one face swapped for another. The genre is one of the cruelest, most invasive forms of identity theft invented in the internet era. At the core of the cruelty is the acuity of the technology: A casual observer can’t easily detect the hoax.

To Test Your Fake News Judgment, Play This Game : NPR Ed Fake news has been on Maggie Farley's mind further back than 2016 when President Trump brought the term into the vernacular. Farley, a veteran journalist, says we've had fake news forever and that "people have always been trying to manipulate information for their own ends," but she calls what we're seeing now "Fake news with a capital F." In other words, extreme in its ambition for financial gain or political power. 14 Resources on Making the Most of Homework We have all seen headlines like, “Are Young Kids Doing Too Much Homework?” and “Homework: Is It Worth the Hassle?” but while this debate continues, homework is a part of K–12 school life for the majority of educators and students. Find strategies and tools that discuss ways to make it more meaningful for students and manageable for teachers with this selection of resources just released on ASCD myTeachSource®. For more resources on effective homework strategies, go to ASCD myTeachSource and sign up for a free two-week trial.

'Fiction is outperforming reality': how YouTube's algorithm distorts truth It was one of January’s most viral videos. Logan Paul, a YouTube celebrity, stumbles across a dead man hanging from a tree. The 22-year-old, who is in a Japanese forest famous as a suicide spot, is visibly shocked, then amused.

Keys to Creating the Ultimate School Culture The underlying beliefs and norm values that administrators, teachers and students hold about their school creates a culture. Numerous educators, writers and researchers have written about school culture that is normally divided into two basic forms: positive and negative. Of course, every school district and school leader wishes that their school fall into the positive camp, but it takes more than wishing. Most of the responsibility and accountability has been placed on members of the school administration, but truly, school culture is shaped by everyone who is part of a school; it takes a village! Thes best administrators know that a positive school culture is based upon the overall satisfaction and safety of the students, staff, and community members–and they also know that if they don’t intentionally lead the shaping of the school culture, others will!