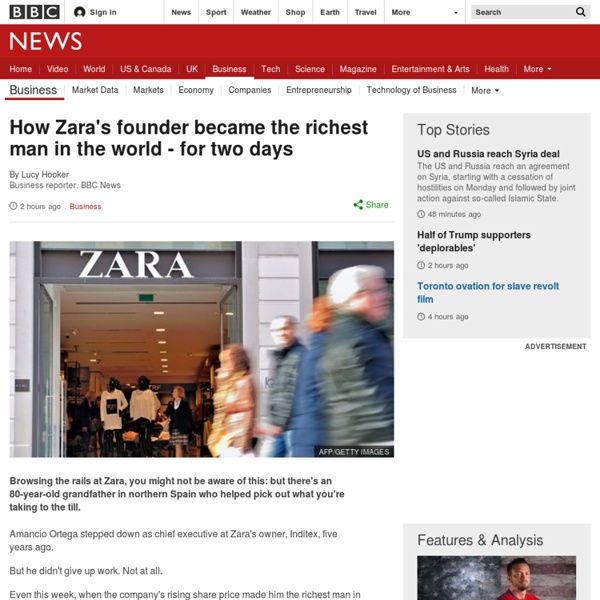 Image copyright AFP/Getty Images Browsing the rails at Zara, you might not be aware of this: but there's an 80-year-old grandfather in northern Spain who helped pick out what you're taking to the till. Amancio Ortega stepped down as chief executive at Zara's owner, Inditex, five years ago. But he didn't give up work. Not at all. Even this week, when the company's rising share price made him the richest man in the world for two days, he wasn't ready to retire. Image copyright Getty Images Every day he still makes the 10km journey from his town centre house to the Inditex headquarters, based just outside the coastal town of La Coruna where he first launched the Zara brand. Sometimes he sits down with the Zara Woman design team and they kick around ideas for the coming weeks and months - the new layout for a store, a new design for the upcoming winter collection. This was not Mr Ortega's first time at the top of the tree. "When Amancio was telling me this, he was terribly emotional.

Primark blames the weather for falling sales Image copyright Getty Images A warm winter and a cold spring has been blamed for a fall in sales at low-cost fashion retailer Primark. Shoppers left winter clothes on the rails in the run up to Christmas due to unusually warm weather, and a cold March and April depressed sales of summer clothes. As a result Primark, like other stores, had to cut the price tag to sell them. Britain Now World's Cheapest Luxury Market LONDON, United Kingdom — In the wake of Britain's vote to leave the EU, which pushed down the value of the pound about 10 percent against the euro, the country has become the cheapest luxury goods market in the world, helping to buoy British luxury labels, at least in the short term, according to new research by Luca Solca, the head of luxury goods at Exane BNP Paribas. "The Brexit vote has made the UK the cheapest market in the world for luxury goods,” Solca told BoF. “A weak British pound will boost travel inflows to the UK, helping British luxury goods players like Burberry, Mulberry and Jimmy Choo." While luxury goods companies are not expected to raise prices in the UK in the coming months — at least until there is more clarity around exactly when and how the country might exit the EU — Britain should see a boost from tourist inflows and spending due to its weakened currency.

Economy Of Fashion: How Different Trends Reflect The Financial State It's common knowledge fashion is cyclical in nature. The concept of “newness” in fashion doesn't refer to the premiere of a trend, but rather its revival. Why fashion cycles in this manner, however, is less obvious. There are lots of factors at play: cultural trends, politics, celebrity influence. One one of the most surprising factors to influence the cycle of fashion, though, is the state of the global economy. If you think about it, it makes sense. How discount retailer Primark has evaded e-commerce Affordable U.K. retailer Primark opened a new 77,000-square-foot department store last week in Boston, introducing the U.S. to its extremely low-cost apparel, accessories and home goods for the first time. It’s also introducing the U.S. to its unique approach to digital: Primark’s products are so deeply discounted, the company refuses to sell them online. John Bason, the chief financial officer of Primark’s parent company, Associated British Foods, has said that e-commerce is “not a profitable avenue.” A rep confirmed that Primark has no plans to begin selling online; its current website displays recent product for men, women and kids, but not for purchase.

How American Eagle Dodged the Teen Retailer Trap PITTSBURGH, United States — For its first global advertising campaign, American Eagle isn’t relying on the typical teen-retail tropes to send its message. You won’t find fresh-faced, unreasonably tanned models running on the beach or palling around a campfire. Instead, the Pittsburgh-based company appears to be focusing on that uniquely millennial mix of individuality and collectivism, enlisting fashion industry cool-kids like photographer Cass Bird and stylist Sara Moonves to capture a cast of young influencers, from actress Hailee Steinfeld to musician Raury, in black-and-white portraits. Each image is tagged with both #WeAllCan and a personal declaration.

Fast Fashion Is the Second Dirtiest Industry in the World, Next to Big Oil - EcoWatch “The clothing industry is the second largest polluter in the world ... second only to oil,” the recipient of an environmental award told a stunned Manhattan audience earlier this year. “It’s a really nasty business ... it’s a mess.” Since 2011, the Greenpeace Detox campaign has challenged some of the world's most popular clothing brands to eliminate all releases of hazardous chemicals. Photo credit: Jonas Gratzer / Greenpeace Globalization and the Fashion Industry In a certain sense, the Western economy has been "global" since the sixteenth century. After all, the African slave trade, colonialism, and the intercontinental trade in sugar and coffee made capitalism possible. But since the early 1980s, transnational corporations, cyber technology, and electronic mass media have spawned a web of tightly linked networks that cover the globe. Taken together, these forces have profoundly restructured the world economy, global culture, and individual daily lives. Nowhere are these changes more dramatic than in the ways dress and fashion are produced, marketed, sold, bought, worn, and thrown away. For consumers in dominant Western countries, globalization means an abundance of fashions sold by giant retailers who can update inventory, make transnational trade deals, and coordinate worldwide distribution of goods at the click of a computer.

Luxury Daily British heritage brand Burberry is demonstrating the importance of beauty personalization as it introduces its latest mascara. For the launch of Cat Lashes mascara, Burberry has partnered with social platform Pinterest to create individualized inspiration boards based on consumers’ beauty preferences. Recently outfitted with ecommerce capabilities, Pinterest has emerged as the go-to platform for sharing favorite products, discovering new must-haves and exploring how-to tutorials, making it ideal for beauty promotions.