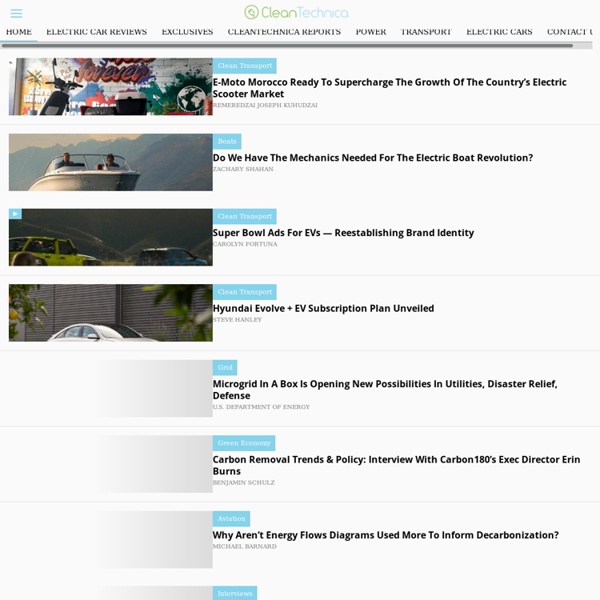 Climate Change Years of Living Dangerously — What It Is, Who’s In It, & What It’s All About Published on April 20th, 2014 | by Sandy Dechert Originally published on CleanTechnica sister site Planetsave. Caution: Now Entering The “Years Of Living Dangerously” (via Planetsave) Last week something rare and extraordinarily positive occurred on American television. Fortunately, through YouTube and 350.org, the rest of ...

San Francisco Green Film Festival INSPIRED TO DO SOMETHING DIFFERENT Have you seen a festival film and started thinking “What can I do?” Then check out our ‘Take Action!’ guides: Find out how you can get involved and have an impact on some of the most pressing environmental issues. 4th SAN FRANCISCO GREEN FILM FESTIVAL THEMES Gulf Seafood Deformities Raise Questions Among Scientists And Fisherman While the true extent of the 1989 Exxon Valdez oil spill was not known for about 4 years, as Al Jazeera notes in the video above, the repercussions of BP's 2010 Deepwater Horizon spill in the Gulf of Mexico may become apparent more quickly. Discovering eyeless shrimp, lesioned fish and other mutated and underdeveloped seafood, fisherman in the Gulf are pointing fingers at the BP spill. Biologist Dr. Darryl Felder told the news agency that Gulf seafood populations are dropping at alarming rates and that species richness is "diminished." The Gulf Restoration Network's Scott Eust explained the bizarre shrimp deformities. "We have some evidence of deformed shrimp, which is another developmental impact.

Sifter Skip to main content Sifter Our favorite stories from around the web Study traces ecological collapse over 6,000 years of Egyptian history Depictions of animals in ancient Egyptian artifacts have helped scientists assemble a detailed record of the large mammals that lived in the Nile Valley over the past 6,000 years. A new analysis of this record shows that species extinctions, probably caused by a drying climate and growing human population in the region, have made the ecosystem progressively less stable. The study, published September 8 in Proceedings of the National Academy of Sciences (PNAS), found that local extinctions of mammal species led to a steady decline in the stability of the animal communities in the Nile Valley.

Management 2.0 : Manage jan 28th, 2010 by Anthony Poncier This first one is related to a conference on Entreprise 2.0 (part of the General Management and Strategy Program) for an audience at HEC Executive Education (HEC is ranked first business school in Europe by the Financial Times). The objective of this article is to share the conference material. In the first part of the program, there was an intervention on Marketing 2.0, so I made only few slides on the subject, not to be redundant with another speaker. Then I focus on collaboration inside the enterprise (Management 2.0), after all, it was a Conference on Management.

Home-made Sun Jar AdWords We use AdWords to deploy digital advertising on sites supported by AdWords. Ads are based on both AdWords data and behavioral data that we collect while you’re on our sites. World wildlife populations halved in 40 years - report 29 September 2014Last updated at 17:29 ET By Roger Harrabin BBC environment analyst In Nepal, habitat loss and hunting have reduced tigers from 100,000 a century ago to just 3,000 The global loss of species is even worse than previously thought, the London Zoological Society (ZSL) says in its new Living Planet Index. The report suggests populations have halved in 40 years, as new methodology gives more alarming results than in a report two years ago.

New global maps detail human-caused ocean acidification A team of scientists has published the most comprehensive picture yet of how acidity levels vary across the world's oceans, providing a benchmark for years to come as enormous amounts of human-caused carbon emissions continue to wind up at sea. "We have established a global standard for future changes to be measured," said Taro Takahashi, a geochemist at Columbia's Lamont-Doherty Earth Observatory who published the maps with his colleagues in the August issue of the journal Marine Chemistry. The maps provide a monthly look at how ocean acidity rises and falls by season and geographic location, along with saturation levels of calcium carbonate minerals used by shell-building organisms. The maps use 2005 as a reference year and draw on four decades of measurements by Lamont-Doherty scientists and others. The oceans have taken up a quarter of the carbon dioxide humans have put in the atmosphere over the last two hundred years.