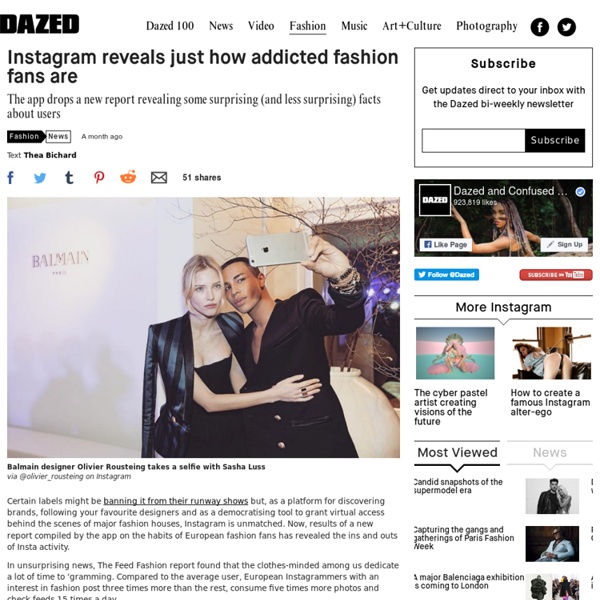 Certain labels might be banning it from their runway shows but, as a platform for discovering brands, following your favourite designers and as a democratising tool to grant virtual access behind the scenes of major fashion houses, Instagram is unmatched. Now, results of a new report compiled by the app on the habits of European fashion fans has revealed the ins and outs of Insta activity. In unsurprising news, The Feed Fashion report found that the clothes-minded among us dedicate a lot of time to ‘gramming. Compared to the average user, European Instagrammers with an interest in fashion post three times more than the rest, consume five times more photos and check feeds 15 times a day. It also seems that fashion is all about give and take when it comes to sharing the love on Instagram: your average European Instagrammer with an interest in high street fashion will follow 2.5 times more accounts than their non-sartorially obsessed counterparts, and in turn have 2.3 times more followers. Related:  Technology • Business context- Designer social media

London fashion week: why technology is in fashion | Media Network At London fashion week the multibillion dollar worlds of tech and fashion are colliding like never before. For many, the launch of Apple’s new watch, announced this week with impeccable timing to coincide with the global fashion weeks, will mark an important turning point for fashion tech, a new sector with huge potential for growth. While Apple’s entry into the market is almost guaranteed to boost the industry’s profile, in reality the fashion industry has been driving fashion tech for years. In 2010, London Fashion Week was the first in the world to grant access to the masses by live streaming the runways. Now, everyone has their smartphone camera primed, ready to make their contribution to the zeitgeist. The next generation of high tech fashionistas are already emerging. Two rising stars from this growing trend are Kate Unsworth and Roberta Lucca. Unsworth is a former model and mathematician bringing her two worlds together to create Kovert Designs, her own digital agency.

Burberry uses first ever Snapcode to let in-store customers unlock online Snapchat content The Snapcode allows in-store shoppers to scan a barcode using their mobile device to unlock content from Burberry’s new campaign for male fragrance Mr Burberry. Burberry is running the content on Snapchat’s Discover channel, offering access to style and fragrance content, including tailoring and grooming tips. The channel will also feature the full-length director’s cut and behind-the-scenes content from the campaign. The content will be available for two months. READ MORE: Burberry in Snapchat first as it premieres new fashion collection online Launching today (4 April) and directed by Oscar-winner Steve McQueen, the ad tells the story of a couple madly in love. From 25 April, there will be scent-dispensing posters in Knightsbridge, London, which will spray the fragrance directly onto the user’s wrist when inserted underneath the sensor. Customers are able to personalise their Mr. This is not the first time that the brand has used Snapchat and personalisation to engage consumers.

How social media are killing the notion of the old-fashioned catwalk | Fashion A barometer of the fashion industry right now shows the outlook as unsettled at best and volatile and stormy at worst, but with a long-term forecast for brighter times. An area of high atmospheric pressure from consumers has swept in just as cataclysmic changes are taking hold in the digital space, and the combination means the world of high fashion is at a tipping point. Kanye West opened New York fashion week with a Madison Square Garden spectacle, launching his Yeezy Season 3 collection and releasing his latest album, to an audience of 18,000 editors, buyers, celebrity pals and paying members of the public. The result? And Diane von Furstenberg will ditch the traditional runway presentation in favour of a more personal “drop-in” experience at her Manhattan HQ. So is this the end of the fashion show as we know it? Navigating the fashionable way forward is complex. “The history of fashion shows was to show the buyers and the press the message of the season.

The Apple Watch Hermès and the brilliant minds behind it When is a watch not a watch? When is luxury not luxury? When is a collaboration not just about a shared business objective, but connecting a shared philosophy and love of craftsmanship? As Tim Cook said about the Apple Watch at its press conference this week – “We are just getting started.” Post-event at the Bill Graham Auditorium in San Francisco I’m sitting backstage with Sir Jony Ive, chief imagineer of the future, a remarkable designer who leaves more than a trace of his personality on his groundbreaking products. The Apple Watch Series 2 is swimmable, GPS-trackable and boasts a myriad of new features and apps. “This is a category right at the beginning,” says Ive of the watch’s ongoing evolution. Beyond pure functionality, the Apple Watch Hermès partnership introduces new styles, along with new colours of strap. “We care about a whole lot of things that people don’t see,” explains Ive. New colours include Rose Jaipur, Étoupe and Bleu Agate.

Fashion’s Fourth Industrial Revolution LONDON, United Kingdom — In the 18th and 19th centuries, the first and second industrial revolutions harnessed water, steam and electric power to mechanise the making of clothing, challenging the traditional system of craft-based production. In the mid-20th century, a third industrial revolution — in information technology and data analysis — radically changed the business of fashion once again, giving rise to fast fashion giants like Inditex and forcing the industry to rethink its ‘broken’ system for the age of Instagram. Now, a fourth industrial revolution — powered by a constellation of new innovations across the physical, digital and biological worlds, from 3D printing and artificial intelligence to advances in biomaterials — is driving a new wave of change across the economy, with major implications for fashion. "We have yet to grasp fully the speed and breadth of this new revolution. The fourth industrial revolution will transform all industries. Related Articles:

Did social media kill fashion week once and for all? NEW YORK – Is anyone paying attention? That's the question I asked throughout New York Fashion Week this season, when the entire front row was too busy Snapchatting their favorite looks, using specific geofilters for their videos, Instagramming shots within seconds of seeing an outfit. In a world of instant gratification, it's difficult not to overshare the sights and sounds with one's followers and friends, especially as brand new couture passes in front of you on the catwalk. I, myself, am guilty of being a social media luddite, one whose photographs and captions are no different than the hundreds of others who posted the exact same picture but with a different filter. But this posed a bigger question than ever this year: Why is fashion week even necessary, then, if we were consumed by our smartphones, and watching it all over social media? But when consumers are immediately engaged with such shows via social media, is there even a point in attending anymore?

Vogue BBC Two Documentary Screening Air Date Picture credit: Linda Brownlee 24 August 2016 Scarlett Conlon FILMING has wrapped, production has finished, and the air date for the BBC Two documentary series depicting life at British Vogue, Absolutely Fashion: Inside British Vogue, has been confirmed. Documentary filmmaker Richard Macer was given unprecedented access to life at Vogue for nine months as it prepared for - and started celebrating - its centenary year. Related Gallery "At Vogue we are more used to being behind the lens than in front of it," said Shulman. Episode one picks up from the end of the spring/summer 2017 fashion shows in September 2015 and follows Shulman, fashion director Lucinda Chambers, creative director Jaime Perlman, fashion features director Sarah Harris, editor-at-large Fiona Golfar, and the wider Vogue team. Absolutely Fashion: Inside British Vogue, BBC Two, Thursday, September 8, 9pm.