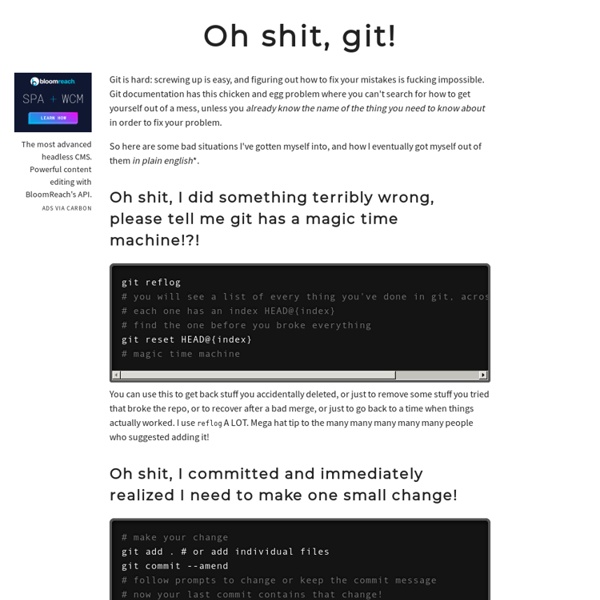 A successful Git branching model » nvie.com In this post I present the development model that I’ve introduced for some of my projects (both at work and private) about a year ago, and which has turned out to be very successful. I’ve been meaning to write about it for a while now, but I’ve never really found the time to do so thoroughly, until now. I won’t talk about any of the projects’ details, merely about the branching strategy and release management. It focuses around Git as the tool for the versioning of all of our source code. (By the way, if you’re interested in Git, our company GitPrime provides some awesome realtime data analytics on software engineering performance.) Why git?

ebde50 click to copy colllor about share Free graph / lined / dot paper generator Answering The Most Important Questions About Using Git With WordPress Version control is one of the most important things you can add to your workflow, not matter what type of WordPress development work you do. It solves so many problems while making your life so much easier. Version control isn’t just the ultimate undo button, perfect for anyone who ever makes mistakes, it can be used as a backup and deployment tool. Beyond that, it creates a record of what was changed when, and makes collaboration easy. The most popular–for good reason–version control system for WordPress development is Git. Earlier this year Andy Leverenz covered the basics of using Git for version control.

My simply Git Cheatsheet Using Git Global Settings Related Setup: Noto Fonts When text is rendered by a computer, sometimes characters are displayed as “tofu”. They are little boxes to indicate your device doesn’t have a font to display the text. Google has been developing a font family called Noto, which aims to support all languages with a harmonious look and feel. Noto is Google’s answer to tofu. The name noto is to convey the idea that Google’s goal is to see “no more tofu”. Noto has multiple styles and weights, and is freely available to all. Getting Started with Git - DZone - Refcardz Editing Once you’ve cloned or initialized a new Git project, just start changing files as needed for your current assignment. There is no pessimistic locking of files by teammates. In fact, there’s no locking at all. Git operates in a very optimistic manner, confident that its merge capabilities are a match for any conflicted changes that you and your colleagues can craft. If you need to move a file, Git can often detect your manual relocation of the file and will show it as a pending “move.”

Docker in Production: An History of Failure – The HFT Guy My first encounter with docker goes back to early 2015. Docker was experimented with to find out whether it could benefit us. At the time it wasn’t possible to run a container [in the background] and there wasn’t any command to see what was running, debug or ssh into the container. The experiment was quick, Docker was useless and closer to an alpha prototype than a release. Modern Version Control With Git The benefits of using a “version control system” are many. It can improve software quality, facilitate collaboration and even help you become a better developer or designer. In this three-part series, I will introduce you to the increasingly popular Git1 version control system. I’ll discuss the main benefits and features of Git and finally demonstrate how to integrate it into your workflow. In this first part, we will cover the basic background information for understanding how — and more importantly, why — to use Git. In the second and third parts, we will take a closer look at Git’s features, including branching and merging, and discuss how to use it in your own design and development projects.

Git Workflows and Tutorials The array of possible workflows can make it hard to know where to begin when implementing Git in the workplace. This page provides a starting point by surveying the most common Git workflows for enterprise teams. As you read through, remember that these workflows are designed to be guidelines rather than concrete rules. We want to show you what’s possible, so you can mix and match aspects from different workflows to suit your individual needs.