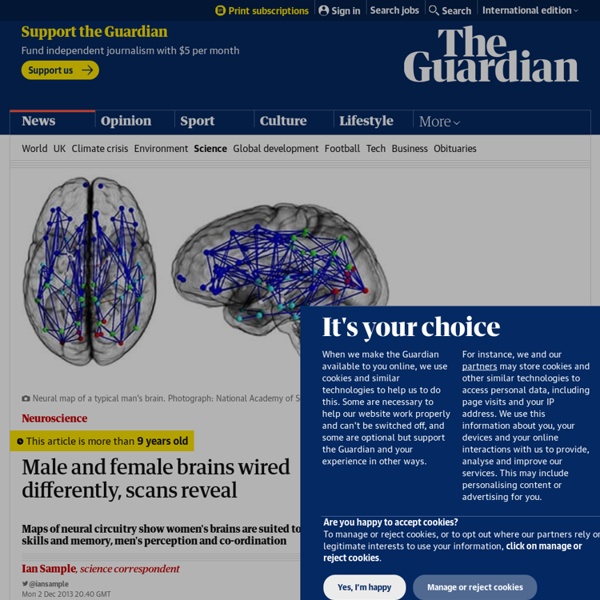 Scientists have drawn on nearly 1,000 brain scans to confirm what many had surely concluded long ago: that stark differences exist in the wiring of male and female brains. Maps of neural circuitry showed that on average women's brains were highly connected across the left and right hemispheres, in contrast to men's brains, where the connections were typically stronger between the front and back regions. Ragini Verma, a researcher at the University of Pennsylvania, said the greatest surprise was how much the findings supported old stereotypes, with men's brains apparently wired more for perception and co-ordinated actions, and women's for social skills and memory, making them better equipped for multitasking. "If you look at functional studies, the left of the brain is more for logical thinking, the right of the brain is for more intuitive thinking. So if there's a task that involves doing both of those things, it would seem that women are hardwired to do those better," Verma said.

Consciousness: Eight questions science must answer Consciousness is at once the most familiar and the most mysterious feature of our existence. A new science of consciousness is now revealing its biological basis. Once considered beyond the reach of science, the neural mechanisms of human consciousness are now being unravelled at a startling pace by neuroscientists and their colleagues. Sex differences in the structural connectome of the human brain Author Affiliations Edited by Charles Gross, Princeton University, Princeton, NJ, and approved November 1, 2013 (received for review September 9, 2013) Significance Sex differences are of high scientific and societal interest because of their prominence in behavior of humans and nonhuman species.

Cops find loaded gun in Tennessee woman’s vagina: report That's no place to pack a pistol. A Tennessee woman being booked for driving with a suspended license was slapped with weapons charges after cops found a loaded gun in her vagina, The Smoking Gun reported. Dallas Archer, 19, was arrested at around 3:15 p.m. Monday and brought to Kingsport jail, where cops found the tiny gun concealed in her private parts, cops said. 10 Psychological Experiments That Went Horribly Wrong Psychology as we know it is a relatively young science, but since its inception it has helped us to gain a greater understanding of ourselves and our interactions with the world. Many psychological experiments have been valid and ethical, allowing researchers to make new treatments and therapies available, and giving other insights into our motivations and actions. Sadly, others have ended up backfiring horribly — ruining lives and shaming the profession. Here are ten psychological experiments that spiraled out of control.

7 Incredible Inventions by Teenage Wunderkinds When many of us were in our teens, work for science fairs comprised cut and paste displays on colorful presentation boards, and our hobbies weren't exactly about to change the world. But across the globe, teenagers with creative, scientific minds are already devising extraordinary devices, revolutionary materials and renewable technologies that might just change our planet for the greener. Click through to see some of their most incredible inventions - from bioplastics made from bananas to pee-powered energy generators and an ocean cleanup array to rid the world's oceans of waste. An Ocean Clean Up Array to Remove 7,250,000 Tons of Plastic From the World’s Oceans When we first covered Boyan Slat’s Ocean Cleanup Array it generated a phenomenal amount of excitement, as well as debate.

21 location independent women running their businesses while traveling the world - Worldette Think you have to be a travel writer or photographer to explore the world and make money? No so! These women are making money while pursuing their passions, getting paid and traveling the world. Location independent women. It doesn’t get cooler than this. The brains of men and women aren’t really that different, study finds In the mid-19th century, researchers claimed they could tell the sex of an individual just by looking at their disembodied brain. But a new study finds that human brains do not fit neatly into “male” and “female” categories. Indeed, all of our brains seem to share a patchwork of forms; some that are more common in males, others that are more common in females, and some that are common to both. The findings could change how scientists study the brain and even how society defines gender.

Woman Who Hoarded Nearly 50 Dogs Was Reportedly Eaten By Pets After She Died A reported Arkansas animal hoarder was eaten by her dogs after she died inside her overcrowded home. The 65-year-old woman, whose identity has not been released, was found in August dead and partially eaten inside her Van Buren County home after having suffered from Hepatitis C, KARK-TV reported. Read: 5-Year-Old Boy is Mauled to Death By 2 Dogs Deputies discovered nearly 50 malnourished dogs-- some extremely aggressive-- on the property and were reportedly forced to shoot and kill some to get to the woman. “It was just a situation I don't want to go through again,” Van Buren County Animal Control Director Reta Tharp told the Huffington Post.

Psychoanalysis Psychoanalysis is a set of psychological and psychotherapeutic theories and associated techniques, originally popularized by Austrian physician Sigmund Freud and stemming partly from the clinical work of Josef Breuer and others. Since then, psychoanalysis has expanded and been revised, reformed and developed in different directions. This was initially by Freud's colleagues and students, such as Alfred Adler and Carl Gustav Jung who went on to develop their own ideas independently from Freud. Later neo-Freudians included Erich Fromm, Karen Horney, Harry Stack Sullivan and Jacques Lacan. The basic tenets of psychoanalysis include the following: Under the broad umbrella of psychoanalysis there are at least 22 theoretical orientations regarding human mental development. New wonder drug matches and kills all kinds of cancer — human testing starts 2014 Stanford researchers are on track to begin human trials of a potentially potent new weapon against cancer, and would-be participants are flooding in following the Post’s initial report on the discovery. The progress comes just two months after the groundbreaking study by Dr Irv Weissman, who developed an antibody that breaks down a cancer’s defense mechanisms in the body. A protein called CD47 tells the body not to “eat” the cancer, but the antibody developed by Dr Weissman blocks CD47 and frees up immune cells called macrophages — which can then engulf the deadly cells. The new research shows the miraculous macrophages effectively act as intelligence gatherers for the body, pointing out cancerous cells to cancer-fighting “killer T” cells. The T cells then “learn” to hunt down and attack the cancer, the researchers claim. The clinical implications of the process could be profound in the war on cancer.

Men Posing Like Motorcycle Models Ducati dealer MotoCorsa recreated a typical “girl on bike” photo shoot with some of the guys from the shop doing the same poses. While promoting the Ducati 1199 Panigale bike, they decided to have a hilarious ad campaign run alongside their regular one. The second campaign features men trying their best to imitate female models by striking some alluring poses and strutting their stuff in front of the candy-red motorcycle. The “Hot Mess” motorcycle shoot features the CorsaCrew recreating Lewallen’s sexy moves while posing alongside one sizzling red Ducati motorcycle.