PiBakery - The blocks based, easy to use setup tool for Raspberry Pi 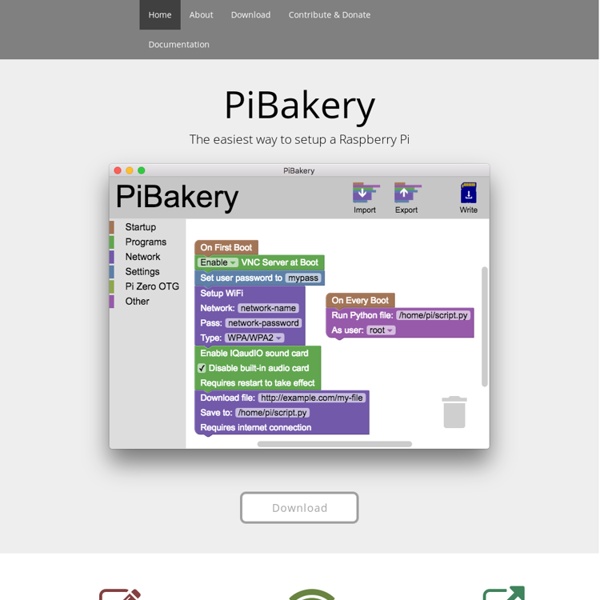 Raspberry Pi: Your Very Own Development Server The Raspberry Pi is a little computer that you can get for as low as US $35 and on which you can run many different types of software and build many different projects. In this article, I’m going to guide you through the process of setting it up as a home development server and deploying a full-stack JavaScript application that you can access from outside your network. This is great for setting up your own remote digital workspace, or simply to have control over the hardware you use for development. What Do You Need? arduino-info - Nrf24L01-2.4GHz-HowTo print this pageUPDATES: (Comments,Critique to terry@yourduino.com) Having two or more Arduinos be able to communicate with each other wirelessly over a distance opens lots of possibilities:Remote sensors for temperature, pressure, alarms, much moreRobot control and monitoring from 50 feet to 2000 feet distancesRemote control and monitoring of nearby or neighborhood buildingsAutonomous vehicles of all kindsThese are a series of low-cost 2.4 GHz Radio modules that are all based on the Nordic Semiconductor nRF24L01+ chip. (Details) The Nordic nRF24L01+ integrates a complete 2.4GHz RF transceiver, RF synthesizer, and baseband logic including the Enhanced ShockBurst™ hardware protocol accelerator supporting a high-speed SPI interface for the application controller. The low-power short-range (50-200 feet or so)Transceiver is available on a board with Arduino interface and built-in Antenna for less than $3!

5 Pointers To Supercharge Your Raspberry Pi Projects You’re in command of the command line. You’re not a noob at setting up NOOBS. Slowly but surely, you’re learning your way around the affordable, credit card-size computer for DIY tinkering, Raspberry Pi. See also: The Quantified Fish: How My Aquarium Uses Raspberry Pi Arduino Simulators Lineup - Start Developing Without a Real Board Launched in 2005, the Arduino open hardware and software platform has grown to be very popular among hobbyists, educators, and professionals alike, gaining momentum especially in the robotics field. Backed by a massive online community, and with most development boards and hardware accessories available at very low prices, this platform is perhaps the best place to start in working with embedded devices. But what if you want to learn programming and do not own an Arduino board, or are overwhelmed by the selection of hardware out there? This is where simulation software comes in. Virtual Breadboard work area

About – LibreELEC LibreELEC is ‘Just enough OS’ for Kodi, a Linux distribution built to run Kodi on current and popular mediacentre hardware. We are an evolution of the popular OpenELEC project. LibreELEC software will be familiar to OpenELEC users, but the project follows its own path and has intentional differences: LibreELEC is governed by a project board elected from active team members to set project goals, priorities, and take executive decisions. Building A Raspberry Pi VPN Part One: How And Why To Build A Server Free, unencrypted wireless is everywhere, but you shouldn’t be checking your bank account on it unless you don’t mind somebody else snooping. The solution? A virtual private network, or VPN. ScratchX What is ScratchX? ScratchX is a platform that enables people to test experimental functionality built by developers for the visual programming language Scratch. What's the difference between Scratch and ScratchX?

BerryIMU - An accelerometer, gyroscope, magnetometer and barometric/altitude sensor - ozzmaker.com Product Description BerryIMU is an inertial measurement unit, or IMU, that measures and reports on velocity, orientation and gravitational forces, using a combination of an accelerometer, gyroscope and a magnetometer. BerryIMU is also fitted with a barometric sensor (BMP180) which can be used to calculate altitude. A temperature sensor is also included. IMUs can be found in devices like, quad copters, smart phones, segways, Wii Remote etc.. and are used to sense movement and orientation. 7 Steps To Install And Optimize Minecraft For Linux Minecraft is arguably one of the most popular, truly-cross-platform games out there, so it’s common for Linux users to own a copy of the game. While it usually runs well on most systems, it does still suffer from performance issues from time to time. Since Java, the language that Minecraft is written in, offers cross-platform capability at the cost of good performance, you may not achieve a perfectly lag-free experience (unless you have powerful hardware to support it). However, there are some steps that you can take that can make every little bit of difference.

Build your own robotic vacuum from scratch Build your own robotic vacuum from scratch Arduino Team — September 23rd, 2016 This dust buster-based robotic vacuum may or may not work as well as a Roomba. Python Web Server for your Raspberry Pi - All Raspbian is a distribution of Debian, a Linux operating system. Raspbian is the most common OS for your Raspberry Pi. 1) To download Raspbian, go to and download Raspbian via either torrent or direct download. 2) Extract the zip file (Right click & click extract for windows; Right click and click Open with > Archive Utility for mac).