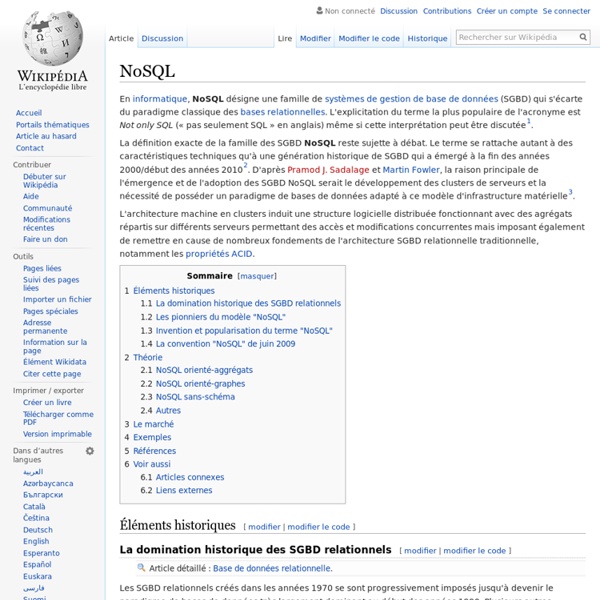 ACID Set of properties (atomicity, consistency, isolation, durability) of database transactions intended to guarantee validity even in the event of errors, power failures, etc. According to Gray and Reuter, IMS supported ACID transactions as early as 1973 (although the term ACID came later).[3] Characteristics[edit] The characteristics of these four properties as defined by Reuter and Härder are as follows:

Why big IT projects always go wrong In 1975, a computer scientist named Fred Brooks published one of the seminal texts in the literature of computing. It had the intriguing title of The Mythical Man-Month and it consisted simply of a set of essays on the art of managing large software projects. Between its covers is distilled more wisdom about computing than is contained in any other volume, which is why it has never been out of print.

untitled by Luke P. Issac on January 14, 2014 Most of you are already familiar with SQL database, and have a good knowledge on either MySQL, Oracle, or other SQL databases. In the last several years, NoSQL database is getting widely adopted to solve various business problems. It is helpful to understand the difference between SQL and NoSQL database, and some of available NoSQL database that you can play around with. Why use a database instead of just saving your data to disk? This Q&A is part of a weekly series of posts highlighting common questions encountered by technophiles and answered by users at Stack Exchange, a free, community-powered network of 100+ Q&A sites. Dokkat appears to think that databases are overused. "Instead of a database, I just serialize my data to JSON, saving and loading it to disk when necessary," he writes. "All the data management is made on the program itself, which is faster AND easier than using SQL queries." What is missing here? Why should a developer use a database when saving data to a disk might work just as well?

CMS comparison - WordPress vs Joomla vs Drupal / WebsiteSetup.org If you’re thinking about building a website or blog, you should consider using one of the best CMS available in the market. A CMS (content management system) helps you create, manage, and modify the contents of your website without the need for any HTML or CSS coding skills. The easy-to-use nature of the modern CMS platforms means that anyone can build themselves a great-looking website all on their own. You don’t need to be a web developer, a designer, or have any previous experience with website building either. In this post, we look through three of the most popular and best CMS platforms coming into 2020, compare their pros and cons, and help you pick one.

What is NoSQL (Not Only SQL database)? - Definition from WhatIs.com NoSQL is an approach to database design that can accomodate a wide variety of data models, including key-value, document, columnar and graph formats. NoSQL, which stand for "not only SQL," is an alternative to traditional relational databases in which data is placed in tables and data schema is carefully designed before the database is built. NoSQL databases are especially useful for working with large sets of distributed data. NoSQL vs. RDBMS The NoSQL term can be applied to some databases that predated the relational database management system, but it more commonly refers to the databases built in the early 2000s for the purpose of large-scale database clustering in cloud and web applications.

DataStax Cassandra 1.2 Documentation An index is a data structure that allows for fast, efficient lookup of data matching a given condition. About primary indexes In relational database design, a primary key is the unique key used to identify each row in a table. A primary key index, like any index, speeds up random access to data in the table. Google’s HTML5 Web Designer Gets Animation Tools, Deeper AdWords And DoubleClick Integrations Last September, Google launched Web Designer, a free tool for Mac, Windows and Linux that makes it easy for anybody to build interactive HTML5 sites and ads. Since its launch, Web Designer got a couple of minor updates, but today’s release is the first major update in a long time and brings quite a few new features to the software. The company says that ads built with Web Designer have now been seen over 2.5 billion times.

MySQL vs NoSQL - Which One Is More Useful (With Infographics) MySQL is the most popular open source relational database management system. Its development project has made its source code available under the terms of GNU General Public License, also under a variety of proprietary agreements. Initially, MySQL was owned and sponsored by a Swedish company called MySQL AB, now owned by Oracle Corporation. For proprietary use, several paid editions are available and offer additional functionality. A NoSQL database is a non-relational database, which provides a mechanism for storage and retrieval of data.

Do You Really Need SQL to Do It All in Cassandra? NoSQL database systems are designed for scalability. The down side of that is a primitive key-value data model and, as the name suggest, no support for SQL. It might sound like a serious limitation – how can I “select”, “join”, “group” and “sort” the data? This post explains how all these operations can be quite naturally and efficiently implemented in one of the most famous NoSQL system – Cassandra. To understand this post you need to know the Cassandra data model.

Google Opens Its Cloud Vision API To All Developers After a short limited preview, Google today announced the public beta of its Cloud Vision API — a service that allows developers to easily build image recognition and classification features into their applications. Google’s technology do basic things like extracting text from images, but its real power is in actually recognizing the objects in an image. This is the same technology that powers the image search in Google Photos and it can recognize anything from flowers, food and animals to local landmarks. Google says it has trained the algorithm to recognize “thousands” of different objects. Image classification is probably the most interesting feature in the API, but the service can also flag inappropriate content, for example, so if you want to keep your photo-centric app PG-rated, the Cloud Vision API can help you there, too.

A Comparison of SQL and NoSQL to Simplify Your Database Decision - DZone Database Have you been investing your time, effort, and resources in building ETL procedures that keep migrating data from one database to another? Is your RDBMS fully equipped to deal with unstructured and non-traditional data? With Big Data becoming the hottest segment of database technology, what’s your game plan to stay on top of the ever-evolving technologies? However you implement ETL processes, you must decide how to structure your data and what technologies to use. To help you make an informed decision that is right for you, let’s start from the basics. What Is SQL?

Why are Facebook, Digg, and Twitter so hard to scale? Real-time social graphs (connectivity between people, places, and things). That's why scaling Facebook is hard says Jeff Rothschild, Vice President of Technology at Facebook. Social networking sites like Facebook, Digg, and Twitter are simply harder than traditional websites to scale. Why is that? Comparison of mobile frameworks There are a lot of players out there in the mobile development framework world. AML isn’t the only option if you’re looking for accelerated or cross-platform mobile development. I believe it is the only option that does what it does, but that doesn’t mean it’s the best one for your application. This article points out the differences, strengths, and weaknesses in a few of the tools out there so that you’ll have the best chance of accomplishing your goal.