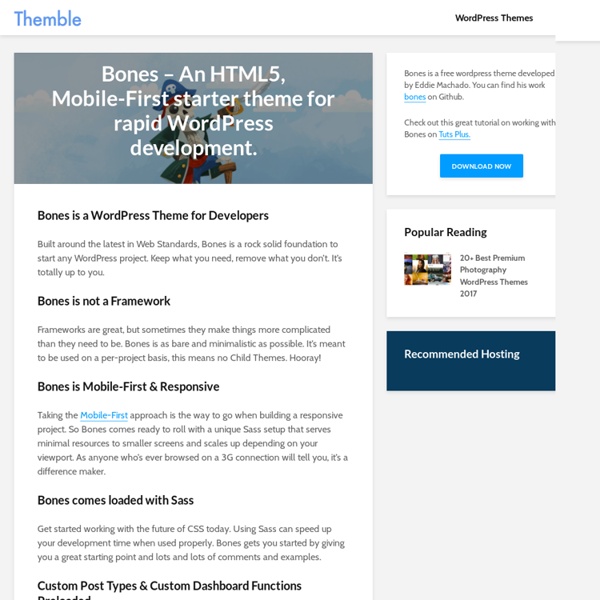 Why Put Up Your Site with the Genesis Framework? WordPress Theme | WPHell.com is a WordPress Theme Framework from the world-renowned team of developers, . It is a website and blog foundation that’s meant specifically for use with the publishing application which is WordPress. Its intelligent coding coupled with optimal design architecture makes it one of the most sought after theme frameworks for WordPress. Built-in SEO You want nothing less for your site than to be on the top search engine results. Sure, updates to make your site search engine-friendly are crucial. And these codes don’t remain static at all. Updatable Layouts Sprucing up a site used to require a team of developers and designers making it an expensive and tedious endeavor. Layouts, and a few of them by the way, are easily available. Security and some more of it! Security is a major concern for blogs and websites. By using , you are a step ahead of your blogger counterparts. Highly Customizable Genesis offers a handful of templates so you can freely create layouts that best represent your posts.

The Genesis Framework Is the Only WordPress Theme You Need — Petersen Media Group image credit: studiopress.com/features/ I’ve been using Genesis since its inception in February, 2010. I honestly can’t remember if I was part of the beta testing, but it wouldn’t surprise me to find an old beta copy in my WordPress archives. For the next 18 months, I alternated projects between Genesis and another theme framework, as well as another couple of really good theme houses who made themes that more or less fit what particular clients wanted. Why I cut down to one theme Well, going all in on Genesis is one framework, but many, many child themes. The global network of support is unparalleled. Studies have shown that your greatest gains in life will come from improving your strengths, not your weaknesses. Why Genesis instead of another framework With those good reasons to consolidate efforts into one framework, I had to choose between frameworks. I can copy/paste functions like a beast when there is an improvement I’ve learned that I want everyone to have. What do you use?

Adding columns to the Wordpress admin posts list This WordPress tutorial will guide you through the process of displaying extra elements such as the featured image in the WordPress posts list. The default display A default list of posts in your WordPress admin panel will look something like the following: With tags, comments, and the date published normally displayed too. But what if we wanted to display the featured image of each of these posts in our list? The extended display To display our featured images in this list we firstly need to create a new image size, specifically for this list. add_image_size( 'admin-list-thumb', 100, 70, true ); You can change the widths and heights of this new image size if you wish, but 100px x 70px seems to fit nicely. Now, lets go back to our functions.php file and add the following code: Your posts list should now look something like this: We now have our featured images displayed in our posts list! Digging a little deeper All we have to do is add a new function to our code: to this: Daniel Hardy

Thesis Vs. Genesis (No BS - Reviews and Comparison Chart) So, today the Sugarrae site flipped to Genesis after using Thesis for nearly five years, as I mentioned in my Genesis review. The question I said had to wait for a second post to be answered was “Why?”. I wanted to address these two (the review and the switch) separately, thus two separate posts on the same day and time. I’ve been using Thesis since before it even used functions and hooks – since the very first version came out in 2008. When the version using functions and hooks were introduced, I was totally confused and intimidated. In 2010, Genesis was released as a framework – and quickly was touted as an awesome alternative to Thesis. As Genesis continued to release child themes, I’d taken to telling people if you want a ready made design you don’t have to do much to, use Genesis. Thesis continued to improve during this time as well. The Launch of Thesis 2.0 Thesis 2.0 was something we’d known was coming for a long time. But, I was utterly confused once I tried to use 2.0 myself.

Create a custom Staff page with Genesis Another post covered creating your custom home page, so this post will work through creating a custom secondary page, specifically a staff page. Staff Page The goal is to create this page without writing custom code, so anyone can set it up for their website regardless of skill level. So we are going to use the Genesis User Widget to add the User Profiles in two columns on the Staff page. Add New Page, Name it Staff, and SaveGo to Genesis –> Extender Custom –> and Create Custom Conditional for the Staff PageCreate 2 Widget Areas for staff pageAssign each of the Widget Areas the following classes: one-half and the left one, also assign the class of first.Make the Widget Areas shortcodesAdd the shortcodes to a Custom Hook BoxAttach the custom hook box to the Custom Conditional for the Staff Page. Shortcut Click Here, to download the zipped dat file for importing into the Genesis Extender.

SEO Mega Blunders: How Important is a SEO Site Audit? - Noob Warrior Answer: Very Its getting quite late and I’m loosing momentum but had to get this one out there. A while back I was using a WordPress theme for a client. We decided to rebuild the website onto the WordPress platform and use the powerful theme, Avada. It is feature heavy and has a great professional look and feel to it for a business. When it came to building a new site for a new niche I was working on, I opted to use that theme again. About 5 weeks passed and I noticed a drop off in search queries. It wasn’t until I ran an SEO site audit using the demo of Raven Tools did it flag up the fact that there were no H1 tags on the site, except for on the category pages. It turns out by removing the styled grey title bar and opting for the plain title heading instead, I was actually using an H2 tag instead of H1 for my titles. Now over 75% of my keywords are starting to get back in the game again. Here is a chart from GWT after a few days of H1′s being back in place: What have I learned from this?