Enter an Archive of 6,000 Historical Children's Books, All Digitized and Free to Read Online 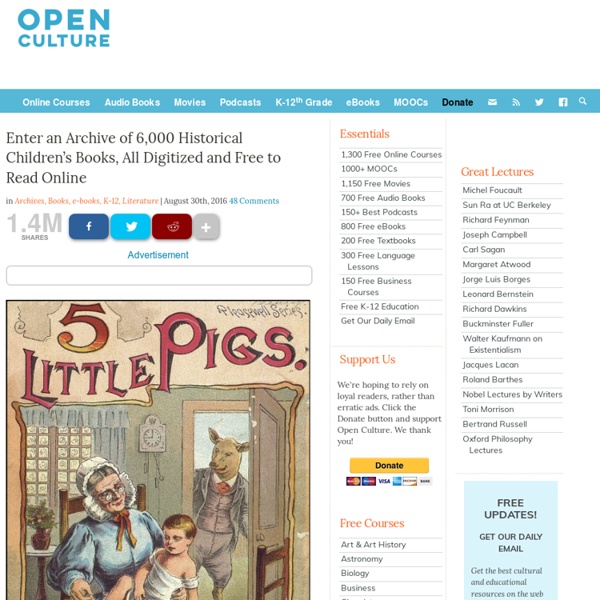 We can learn much about how a historical period viewed the abilities of its children by studying its children's literature. Occupying a space somewhere between the purely didactic and the nonsensical, most children’s books published in the past few hundred years have attempted to find a line between the two poles, seeking a balance between entertainment and instruction. However, that line seems to move closer to one pole or another depending on the prevailing cultural sentiments of the time. And the very fact that children’s books were hardly published at all before the early 18th century tells us a lot about when and how modern ideas of childhood as a separate category of existence began. “By the end of the 18th century,” writes Newcastle University professor M.O. Grenby, “children’s literature was a flourishing, separate and secure part of the publishing industry in Britain.” Related Content: The First Children’s Picture Book, 1658’s Orbis Sensualium Pictus

Read The Passage Page 1 read free novels online Part I The road to death is a long march beset with all evils, and the heart fails little by little at each new terror, the bones rebel at each step, the mind sets up its own bitter resistance and to what end? The barriers sink one by one, and no covering of the eyes shuts out the landscape of disaster, nor the sight of crimes committed there. Pale Horse, Pale Rider Free eBooks Online For Teens And Young Adults Introduction This is a listing of 66 sites that legally offer free ebooks for teens and young adults, for reading. There is a separate listing of free audiobooks in this genre at Free Teen & Young Adult Audiobooks Online All of these sites listed have content that is legal for them to distribute and for you to read and or download. If you find that any site listed is offering content that can not be legally transferred, please let me know in the comments below.

Travel - Japan’s unusual way to view the world Withdrawing my hands reluctantly from the slowly spinning bowl, I watched its uneven sides slowly come to a stop, wishing I could straighten them out just a little more. I was in the ancient pottery town of Hagi in rural Yamaguchi, Japan, and while I trusted the potter who convinced me to let it be, I can’t say I understood his motives. Smiling, he announced, “it has wabi-sabi” – and whisked the bowl away for firing. I sat, contemplating the lack of symmetry and wondering what on Earth he meant. Refugee Audiobook by Alan Gratz Free Online Streaming [Total: 635 Average: 3.8/5] Since the time the violence has started over the different parts of the world, people have gone through pain, misery and numerous unknown and unbearable conditions that none could have imagined earlier. Alan Gratz brings to light to unleash the dangers, the pain and the hardships the three kids face while they travel to find peace in their lives on their way to meet their families abroad. The story is about three different kids from different parts of the world one a Jewish boy named Joseph who is in the Nazi Germany 1930 and is trying to seek refuge from the painful living there. Another kid who is a girl and is named Isabel is a Cuban in 1994 and is going on a raft with her family to seek refuge and peace in other parts of the world.

Japanese Aesthetics 1. Introduction Two preliminary observations about the Japanese cultural tradition to begin with. The first is that classical Japanese philosophy understands the basic reality as constant change, or (to use a Buddhist expression) impermanence. The world of flux that presents itself to our senses is the only reality: there is no conception of some stable “Platonic” realm above or behind it. The arts in Japan have traditionally reflected this fundamental impermanence—sometimes lamenting but more often celebrating it. Best Short Stories for Middle Schoolers, As Chosen by Teachers It can be a challenge to get middle schoolers interested in reading. The thought of tackling a thick novel can be overwhelming, especially toward the end of the school year when attention spans and patience for reading are often running short. Short stories are always a great choice. In addition to requiring less of a time commitment, they are an easy way to expose your students to new authors and genres. Also, the best short stories are every bit as engaging and meaningful as the best novels. Here are some of our favorite short stories for middle schoolers to share with your students.

5 New Google-Made Apps That Are Cool, Useful, and Fun Google is constantly developing new apps, conducting experiments with AI, and making cool stuff. In case you missed their latest and greatest, here’s a quick rundown. Google is a technology giant that is a massive part of how we use the internet today. Its developers and engineers constantly update Google apps or create new ones that make our digital lives easier. There is such a huge number of them, in fact, that it’s easy to miss out on some excellent tools, like the ones in this list. Google Live Transcribe is an accessibility tool meant to make life easier for those who are deaf or hard of hearing. 40 Stunning Color Photographs Capture Daily Life in Poland in the Early 1980s In the early 1980s, while Gdansk and Warsaw were in the midst of a sociopolitical upheaval of great impact on a European scale, Bruno Barbey took the occasion to embark on a journey of almost 40,000 kilometers over an eight month period. Accompanied by his family and living in a camper, he managed to detour the stern surveillance prevalent at the time. This was an approach that allowed him to discover a tormented people in battle and a country torn between Catholicism and Communism, where the word “solidarity” really means something. Bruno Barbey insists, “Poland was the page in History that was being written and it was the memory of an ancestral society on the verge of disappearing.” (Photos by Bruno Barbey)