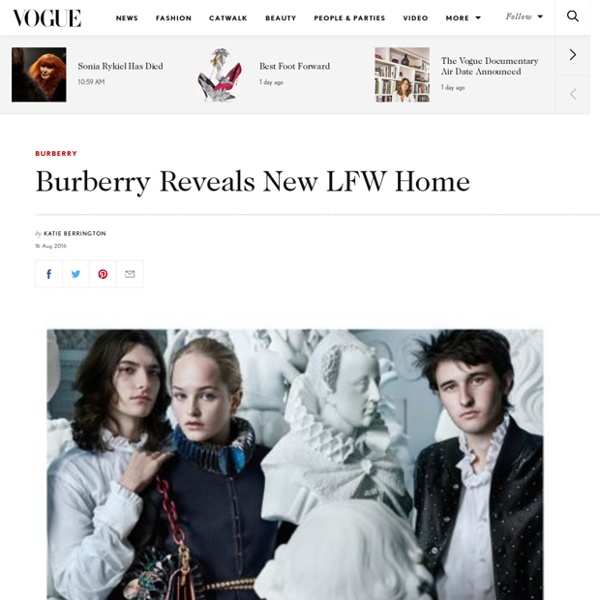 Indigital BURBERRY is bidding farewell to its Kensington Gardens base for the forthcoming show on September 19, the brand has revealed this morning. Bailey On The Changes At Burberry Bailey On The Changes At Burberry Moving closer to the London Fashion Week hub in Soho's Brewer Street Car Park - where the official show space has been located for the past two seasons - the luxury British brand's new venue, named "Makers House", is situated at 1 Manette Street. Burberry/Mario Testino The location is not the only change that Burberry is undergoing this season. Burberry Appoints New CEO Burberry Appoints New CEO The news comes as Burberry unveils images from its latest campaign, shot against the impressive backdrop of Liverpool's Walker Art Gallery by Mario Testino and featuring Jean Campbell, Cavan McCarthy and Alex Dragulele. Burberry Changes Fashion-Show Model Burberry Changes Fashion-Show Model

Yves Saint Laurent ad banned for using 'unhealthily underweight' model An advert by the fashion company Yves Saint Laurent has been banned by the UK’s advertising watchdog for using a model who appeared to be unhealthily underweight. Upholding a complaint that the model looked too thin, the Advertising Standards Authority (ASA) censured the advert, which appeared in Elle magazine, as irresponsible. In its ruling, published on Wednesday, it said: “The ASA considered that the model’s pose and the particular lighting effect in the ad drew particular focus to the model’s chest, where her rib cage was visible and appeared prominent, and to her legs, where her thighs and knees appeared a similar width, and which looked very thin, particularly in light of her positioning and the contrast between the narrowness of her legs and her platform shoes.

Luxury Daily London department store Harrods is working with fashion house Burberry to tell “A Very British Fairy Tale.” The retailer’s effort for holiday 2016 will kick off in November when its window displays facing Brompton Road are unveiled. Holiday windows attract crowds of shoppers and passersby, allowing the retail host to become part of consumers' traditions. A British wonderlandHarrods’ holiday windows will see the creation of a snow covered landscape and two small children as its protagonists. The children will be shown, window by window, traveling to an English country home, but with an imaginative twist.

Burberry becomes first luxury brand to personalise on Pinterest Burberry has become the first luxury brand to offer customers a personalised experience on Pinterest, letting them create customised make-up boards to promote its new ‘Cat Lashes Mascara’ product. The personalisation works by asking visitors three questions. Their answers, along with their initials will be combined to create the personal Pinterest board. The partnership allows Burberry to benefit from Pinterest’s features and data to cater its posts to individuals though personalised and monogrammed content. Pinterest is currently the largest beauty platform in the world, with 38.5 million unique viewers of its hair and beauty category. Content will include makeup preferences, inspirational images, ‘how to get the look’ guides, product tips and information.

Gucci Stores Get Marble Staircases as Luxury Brand Seeks Revival MILAN, Italy — Velvet armchairs and marble staircases form the backdrop against which Gucci’s new creative director is basing his efforts to extend a revival at the ailing luxury brand. Alessandro Michele’s fall-winter collection is being shown in a lavish setting at Gucci’s flagship store in Milan that also includes vintage oriental rugs and plush carpets. The new design will be introduced at other Gucci outlets after Friday’s debut in the Italian fashion capital. The store format “is one of the ways in which we are communicating Gucci’s new identity,” Gucci Chief Executive Officer Marco Bizzarri said in a statement. New Jersey, Brooklyn, Staten Island 07 Apr, 2016 Fueling the Zilli family’s French fashion house is a dedication to nothing less than, as the company described, producing “the finest garments for men in the world.” Started by Alain Schimel in 1970 in Lyon (the birthplace of the French textile industry and silk capital of the world)—and a partial tribute to his parents Rose and Oscar Schimel, who had a coat making workshop in the Croix- Rousse district of the city, Zilli’s initial masterstroke was designing and making the first luxury leather jacket, to which celebrities such as John Wayne and Francis Bacon soon became devoted. In time, the brand has expanded to encompass a variety of men’s luxury apparel, and also luggage, belts, shoes, eyewear, and jewelry. Zilli remains a favorite of A-listers in business and entertainment, as well as members of the Royal Family of Dubai.

Luxury Brands Focus On “Instagram Generation” Ultra Rich Customers It’s a brave new world out there, though not the one Aldus Huxley envisioned. Technology is all-pervading in more ways than we actually realize. While browsing the web you always come across headlines with celebs touting the latest and greatest. American Luxury Companies Remain Cautious as Weak Traffic Weighs on Sales NEW YORK, United States — Luxury-goods sellers are keeping the champagne on ice. Despite posting earnings that topped analysts’ estimates for their most recent quarters, Coach Inc., Ralph Lauren Inc. and Michael Kors Holdings Ltd. all offered less-than-rosy forecasts. The gloomy outlooks weighed on shares of Coach and Michael Kors, while Ralph Lauren’s stock rose on optimism that a turnaround plan from its new chief executive officer is gaining traction.

Gucci Among World’s Hottest Fashion Brands, While Prada Cools LONDON, United Kingdom — Gucci has been named one of the “hottest” luxury brands, while Prada and Giorgio Armani are “cooling” fast, according to a new report by Exane BNP Paribas. The financial services firm assessed the “brand temperature” of luxury companies, based on the ratio between the editorial coverage they receive in print magazines, and their print advertising spend. Brands are ranked as “hot” if magazines give them more editorial space than their advertising spend should warrant, meaning they have more editorial coverage than print magazine advertisements — reflecting a “hot” level of appeal and desirability — whereas brands that fall below this ratio are “cold.”

Raf Simons Starts at Calvin Klein, Marking Strategic Shift NEW YORK, United States — It's official. Raf Simons has been named the new chief creative officer of Calvin Klein, formalising the Belgian designer's next move after three years as women's creative director of Christian Dior Couture. The arrival of Simons at the helm of the iconic American brand comes soon after the news that Dior has hired Valentino co-creative director Maria Grazia Chiuri to design its women’s collections, replacing Simons, who resigned in October 2015 from the LVMH-controlled French luxury house. Simons’ non-compete agreement is thought to have expired at the end of July, which explains why his appointment at the PVH Corp.

Luxury footwear brand Jimmy Choo boosted by weaker pound Celebrity-favourite footwear brand Jimmy Choo has posted rising profits and said it expects a weaker pound in the wake of Brexit to further boost revenues and profits. The luxury shoes and accessories firm, popular with the likes of Jennifer Lopez and Sandra Bullock, said that because only 9.5 per cent of its global revenues are in pounds compared to a larger 28 per cent of operating costs, a weaker sterling ‘will lead to a reported upside in business performance at a revenue and profit level’. The comment came as Jimmy Choo posted a 43 per cent rise in operating profits for the six months to the end of June to £25.3million boosted by a weak pound, as well as growth in China and in its men's coillection. Luxury appetite: Jimmy Choo said it saw ‘impressive’ growth in China, which has been a tough market for its competitors recently While being well-known for its skyscraper heels, Jimmy Choo's men’s line and handbags have also been doing well.