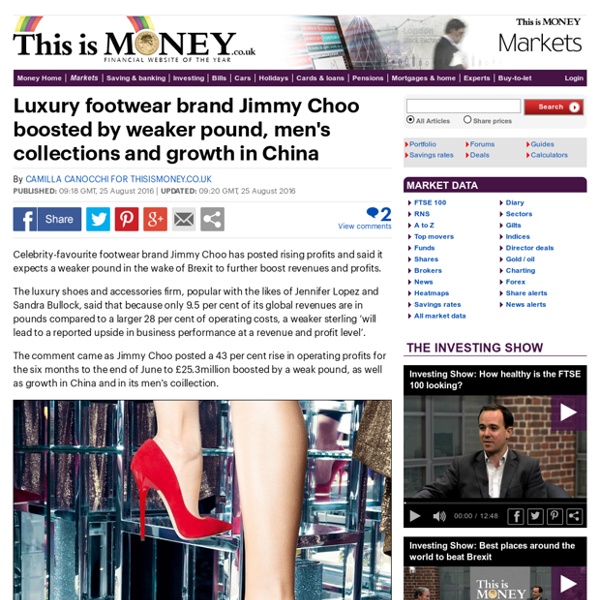 Celebrity-favourite footwear brand Jimmy Choo has posted rising profits and said it expects a weaker pound in the wake of Brexit to further boost revenues and profits. The luxury shoes and accessories firm, popular with the likes of Jennifer Lopez and Sandra Bullock, said that because only 9.5 per cent of its global revenues are in pounds compared to a larger 28 per cent of operating costs, a weaker sterling ‘will lead to a reported upside in business performance at a revenue and profit level’. The comment came as Jimmy Choo posted a 43 per cent rise in operating profits for the six months to the end of June to £25.3million boosted by a weak pound, as well as growth in China and in its men's coillection. Luxury appetite: Jimmy Choo said it saw ‘impressive’ growth in China, which has been a tough market for its competitors recently While being well-known for its skyscraper heels, Jimmy Choo's men’s line and handbags have also been doing well.

American Luxury Companies Remain Cautious as Weak Traffic Weighs on Sales NEW YORK, United States — Luxury-goods sellers are keeping the champagne on ice. Despite posting earnings that topped analysts’ estimates for their most recent quarters, Coach Inc., Ralph Lauren Inc. and Michael Kors Holdings Ltd. all offered less-than-rosy forecasts. The gloomy outlooks weighed on shares of Coach and Michael Kors, while Ralph Lauren’s stock rose on optimism that a turnaround plan from its new chief executive officer is gaining traction. Executives at the companies — which sell merchandise ranging from $400 handbags to $5,000 pea coats — say decreased tourism to the US and dwindling spending are hurting sales at department stores as well as their own locations. And in a break from recent practice, they are trying to avoid resorting to extreme discounts to move merchandise for fear that the tactic will ruin their brands’ images among consumers. Michael Kors

Retailers challenge national living wage Don-Alvin Adegeest London - While the government has thus far been successful in its policy to increase the UK's national living age, some businesses and retailers are keen for the policy, set to come into full affect by 2020, to be revised or abandoned. According to the Financial Times, 16 trade associations are challenging the policy, having written to new business secretary Greg Clark recommending he “exercise caution” on the national living wage in light of the “economic uncertainties the country faces” after the Brexit vote. The national living wage is one of George Osborne's legacy policies, to ensure over 25 year-olds earn a median income, which by 2020 would be just over 9 pounds per hour. The wage was increased as of April 1st this year to 7.20 per hour. Fashion chains, supermarkets and the hospitality sector are expecting to have to raise wages.

Gucci Stores Get Marble Staircases as Luxury Brand Seeks Revival MILAN, Italy — Velvet armchairs and marble staircases form the backdrop against which Gucci’s new creative director is basing his efforts to extend a revival at the ailing luxury brand. Alessandro Michele’s fall-winter collection is being shown in a lavish setting at Gucci’s flagship store in Milan that also includes vintage oriental rugs and plush carpets. The new design will be introduced at other Gucci outlets after Friday’s debut in the Italian fashion capital. Brexit 'means economy faces 50/50 recession chance' Image copyright Reuters The UK has a 50/50 chance of falling into recession within the next 18 months following the Brexit vote, says a leading economic forecaster. The National Institute of Economic and Social Research (NIESR) says the country will go through a "marked economic slowdown" this year and next. It says inflation will also pick up, rising to 3% by the end of next year. "This is the short-term economic consequence of the vote to leave the EU", said Simon Kirby of the NIESR. Overall the institute forecasts that the UK economy will probably grow by 1.7% this year but will expand by just 1% in 2017.

Yves Saint Laurent ad banned for using 'unhealthily underweight' model An advert by the fashion company Yves Saint Laurent has been banned by the UK’s advertising watchdog for using a model who appeared to be unhealthily underweight. Upholding a complaint that the model looked too thin, the Advertising Standards Authority (ASA) censured the advert, which appeared in Elle magazine, as irresponsible. In its ruling, published on Wednesday, it said: “The ASA considered that the model’s pose and the particular lighting effect in the ad drew particular focus to the model’s chest, where her rib cage was visible and appeared prominent, and to her legs, where her thighs and knees appeared a similar width, and which looked very thin, particularly in light of her positioning and the contrast between the narrowness of her legs and her platform shoes. “We therefore considered that the model appeared unhealthily underweight in the image and concluded that the ad was irresponsible.” YSL and Elle declined to comment on the ruling.

Rising costs pile on the agony for Britain’s fashion retailers From culottes to “cold shoulder” tops and woven loafers last seen in Miami Vice, many Britons have struggled with this summer’s fashions, but now there is an even more unpalatable trend on the horizon – in the shape of higher prices. The devaluation of sterling following the June Brexit vote has had major ramifications for store chiefs who pay in dollars for large quantities of imported goods. The first indication of where prices could be heading came last week from Next, one of the UK’s biggest clothing retailers, which pencilled in increases of up to 5% in 2017. “We have always taken the view that if our costs go up, our selling prices will go up,” said Next chief executive Lord Wolfson.

Burberry New London Fashion Week Home Indigital BURBERRY is bidding farewell to its Kensington Gardens base for the forthcoming show on September 19, the brand has revealed this morning. Bailey On The Changes At Burberry Bailey On The Changes At Burberry Moving closer to the London Fashion Week hub in Soho's Brewer Street Car Park - where the official show space has been located for the past two seasons - the luxury British brand's new venue, named "Makers House", is situated at 1 Manette Street.