Burberry teams up with Harrods for 2016 Christmas Windows 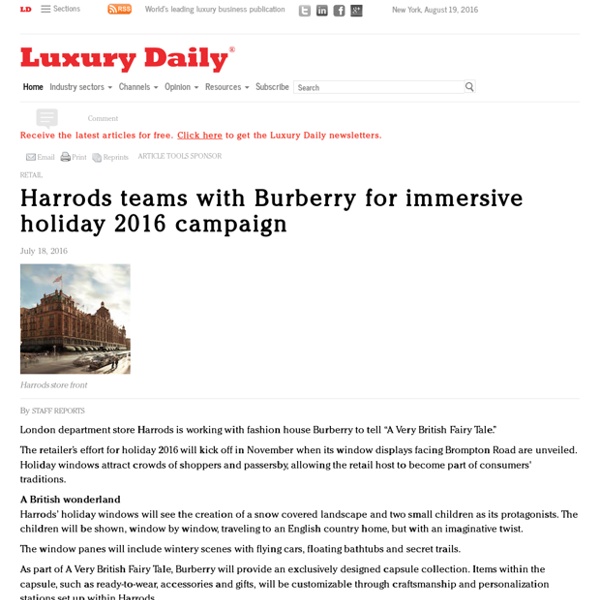 London department store Harrods is working with fashion house Burberry to tell “A Very British Fairy Tale.” The retailer’s effort for holiday 2016 will kick off in November when its window displays facing Brompton Road are unveiled. Holiday windows attract crowds of shoppers and passersby, allowing the retail host to become part of consumers' traditions. A British wonderlandHarrods’ holiday windows will see the creation of a snow covered landscape and two small children as its protagonists. The children will be shown, window by window, traveling to an English country home, but with an imaginative twist. The window panes will include wintery scenes with flying cars, floating bathtubs and secret trails. As part of A Very British Fairy Tale, Burberry will provide an exclusively designed capsule collection. Burberry launched a similar effort in its Regent Street flagship for the month of June, giving consumers a close-up view of artisan hand embossing and monogramming.

LVMH Vice President Delphine Arnault: "IT IS HARD TO REJECT FASHION" - 032c Workshop This article originally appeared in 032c Issue #30: “NO FEAR”, released in May 2016. It is available now. If industry wisdom is now crowd-sourced, who makes the decisions in fashion? The power-center once called “the establishment” has become an amorphous blob that dilates and contracts with the flux of trending topics.

Burberry New London Fashion Week Home Indigital BURBERRY is bidding farewell to its Kensington Gardens base for the forthcoming show on September 19, the brand has revealed this morning. Bailey On The Changes At Burberry Skepta is teaming up with Levi’s to help north London youth Influential Grime MC and proud north Londoner Skepta is collaborating with Levi’s on the brand’s new youth outreach project, designed to engage young people with the music industry. As part of the collaboration between Levi’s and the V&A’s You Say You Want a Revolution? Records and Rebels 1966–1970 exhibition, Skepta performed at the museum on Tuesday night and will be partnering with the iconic denim brand as part of the Levi’s Music Project.

Vogue BBC Two Documentary Screening Air Date Picture credit: Linda Brownlee 24 August 2016 Scarlett Conlon FILMING has wrapped, production has finished, and the air date for the BBC Two documentary series depicting life at British Vogue, Absolutely Fashion: Inside British Vogue, has been confirmed. The first of two episodes will air on Thursday, September 8 at 9pm. Documentary filmmaker Richard Macer was given unprecedented access to life at Vogue for nine months as it prepared for - and started celebrating - its centenary year. New Jersey, Brooklyn, Staten Island 07 Apr, 2016 Fueling the Zilli family’s French fashion house is a dedication to nothing less than, as the company described, producing “the finest garments for men in the world.” Started by Alain Schimel in 1970 in Lyon (the birthplace of the French textile industry and silk capital of the world)—and a partial tribute to his parents Rose and Oscar Schimel, who had a coat making workshop in the Croix- Rousse district of the city, Zilli’s initial masterstroke was designing and making the first luxury leather jacket, to which celebrities such as John Wayne and Francis Bacon soon became devoted. In time, the brand has expanded to encompass a variety of men’s luxury apparel, and also luggage, belts, shoes, eyewear, and jewelry. Zilli remains a favorite of A-listers in business and entertainment, as well as members of the Royal Family of Dubai.

Jaden Smith for Louis Vuitton: The New Man in a Skirt Translation: This is the natural end stage of the fashion revolution started in the 1960s and ’70s when women took off their aprons and girdles and appropriated jeans. This posits millennials as the real heirs to the Me Generation, though it’s questionable whether many of Mr. Smith’s 2.4 million Instagram followers are also actual Vuitton customers. After Brexit, which way for fashion? The impact of Brexit on the fashion industry is daunting, brain-scrambling and multi-levelled. The industry directly contributed £28bn to the UK’s economy in 2015 and employs 880,000 in roles from manufacturing to retail. For many British designers and stores, there will be an immediate hit on costs and margins.

Gucci Among World’s Hottest Fashion Brands, While Prada Cools LONDON, United Kingdom — Gucci has been named one of the “hottest” luxury brands, while Prada and Giorgio Armani are “cooling” fast, according to a new report by Exane BNP Paribas. The financial services firm assessed the “brand temperature” of luxury companies, based on the ratio between the editorial coverage they receive in print magazines, and their print advertising spend. Brands are ranked as “hot” if magazines give them more editorial space than their advertising spend should warrant, meaning they have more editorial coverage than print magazine advertisements — reflecting a “hot” level of appeal and desirability — whereas brands that fall below this ratio are “cold.” Gucci’s editorial value was up more than 15 percent for the first six months of the year, compared to the same period last year.

Raf Simons Confirmed at Calvin Klein – WWD Finally! Calvin Klein today confirmed what has been fashion’s worst-kept secret for months, naming Raf Simons as creative director of all of its women’s and men’s brands. The appointment ends more than nine months of speculation.

Russian mink farms where thousands are slaughtered and left to rot to make $1m coats These disturbing pictures expose the macabre truth about the fur farms in Russia and China which supply the fashion market in the world's leading cities, including London, Paris and New York. Across ten time zones, the images show the reality of mink and sable gulags - many set up during the harsh Communist past - where prized animals are bred for slaughter, bringing in millions of pounds to the Russian economy every single year. An investigation by MailOnline also reveals the appalling conditions in which wild animals, including different types of fox, are captured and killed, from being skinned alive to being poisoned by the faeces in the air, and reveals the heartless farm owners who can't see beyond their profits. And there are certainly profits to be made: a sable 'blanket' sold for a record-breaking $900,000 to a royal just a few years ago, while a coat at last year's Fendi show was rumoured to have a price tag of $1.2million.