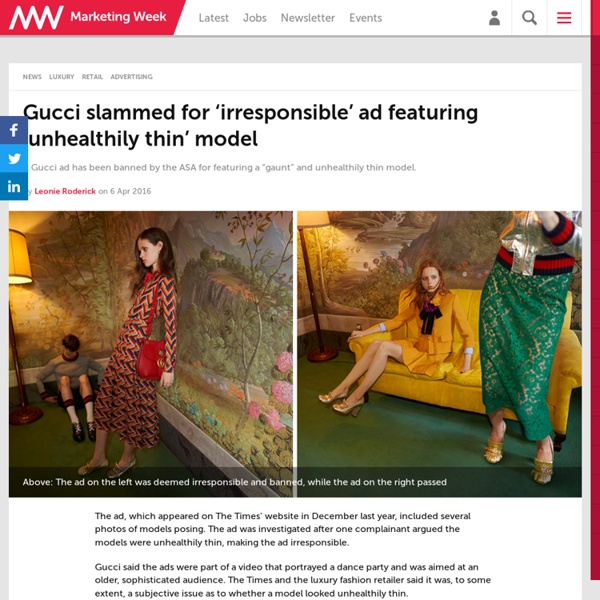 The ad, which appeared on The Times’ website in December last year, included several photos of models posing. The ad was investigated after one complainant argued the models were unhealthily thin, making the ad irresponsible. Gucci said the ads were part of a video that portrayed a dance party and was aimed at an older, sophisticated audience. The Times and the luxury fashion retailer said it was, to some extent, a subjective issue as to whether a model looked unhealthily thin. The brand believed both models had slim builds, but were not depicted in a way that could be interpreted as unhealthily thin. It said nowhere in the ads were any models’ “bones” visible, their makeup was natural rather than heavy (which might have accentuated the impression of thinness), lighting was uniform and warm to ensure there were no hollows caused by shadows and their clothes were not revealing. The ASA was not as positive, however, about another model leaning against a wall.

American Luxury Companies Remain Cautious as Weak Traffic Weighs on Sales NEW YORK, United States — Luxury-goods sellers are keeping the champagne on ice. Despite posting earnings that topped analysts’ estimates for their most recent quarters, Coach Inc., Ralph Lauren Inc. and Michael Kors Holdings Ltd. all offered less-than-rosy forecasts. The gloomy outlooks weighed on shares of Coach and Michael Kors, while Ralph Lauren’s stock rose on optimism that a turnaround plan from its new chief executive officer is gaining traction. Executives at the companies — which sell merchandise ranging from $400 handbags to $5,000 pea coats — say decreased tourism to the US and dwindling spending are hurting sales at department stores as well as their own locations. And in a break from recent practice, they are trying to avoid resorting to extreme discounts to move merchandise for fear that the tactic will ruin their brands’ images among consumers.

Prada seeks younger customers in bid for growth Image copyright AP Italian luxury fashion group Prada has predicted a return to growth as it seeks to connect with younger customers through online sales and flexible pricing. First half profits fell 25% to €330m (£282m) due partly to falling demand in China and Italy. But Prada said it saw 2016 as "a turning point." It has been reviewing prices, product variety and online marketing to appeal to more customers.

Raf Simons Starts at Calvin Klein, Marking Strategic Shift NEW YORK, United States — It's official. Raf Simons has been named the new chief creative officer of Calvin Klein, formalising the Belgian designer's next move after three years as women's creative director of Christian Dior Couture. The arrival of Simons at the helm of the iconic American brand comes soon after the news that Dior has hired Valentino co-creative director Maria Grazia Chiuri to design its women’s collections, replacing Simons, who resigned in October 2015 from the LVMH-controlled French luxury house. Simons’ non-compete agreement is thought to have expired at the end of July, which explains why his appointment at the PVH Corp.-owned Calvin Klein, though widely anticipated in industry circles, was never confirmed by the company until today. The company took to social media — including Instagram, Twitter and Facebook — to communicate the news.

Burberry becomes first luxury brand to personalise on Pinterest Burberry has become the first luxury brand to offer customers a personalised experience on Pinterest, letting them create customised make-up boards to promote its new ‘Cat Lashes Mascara’ product. The personalisation works by asking visitors three questions. Their answers, along with their initials will be combined to create the personal Pinterest board. The partnership allows Burberry to benefit from Pinterest’s features and data to cater its posts to individuals though personalised and monogrammed content.

Fashion brands struggling to find the right social influencers Social media influencers are fast becoming brands’ go-to option for generating trust and credibility among young consumers. According to a new report by Fashion and Beauty Monitor in association with Econsultancy – both sister brands of Marketing Week – 57% of marketers and business owners in the fashion and beauty sectors use influencers as part of their marketing strategy, with an additional 21% looking to introduce this type of activity over the next 12 months. The growing authority of online commentators and YouTube stars such as Zoella has given rise to this new breed of peer-to-peer brand ambassador. The fact that 41% of respondents have been collaborating with online content creators for three years or more, in what is considered a maturing space, also suggests fashion and beauty firms are ahead of the curve in their use of influencer marketing. “It’s important brands understand that influencers have the following they do because people trust them and their opinion,” she says.

Luxury Brands Focus On “Instagram Generation” Ultra Rich Customers It’s a brave new world out there, though not the one Aldus Huxley envisioned. Technology is all-pervading in more ways than we actually realize. While browsing the web you always come across headlines with celebs touting the latest and greatest. Whether it’s a reality star, a Hollywood A-lister or a singer, everyone knows what they’re doing, where they are, what they’re wearing – oh, and what they are driving. The paparazzi will soon be a thing of the past. Luxury footwear brand Jimmy Choo boosted by weaker pound Celebrity-favourite footwear brand Jimmy Choo has posted rising profits and said it expects a weaker pound in the wake of Brexit to further boost revenues and profits. The luxury shoes and accessories firm, popular with the likes of Jennifer Lopez and Sandra Bullock, said that because only 9.5 per cent of its global revenues are in pounds compared to a larger 28 per cent of operating costs, a weaker sterling ‘will lead to a reported upside in business performance at a revenue and profit level’. The comment came as Jimmy Choo posted a 43 per cent rise in operating profits for the six months to the end of June to £25.3million boosted by a weak pound, as well as growth in China and in its men's coillection.