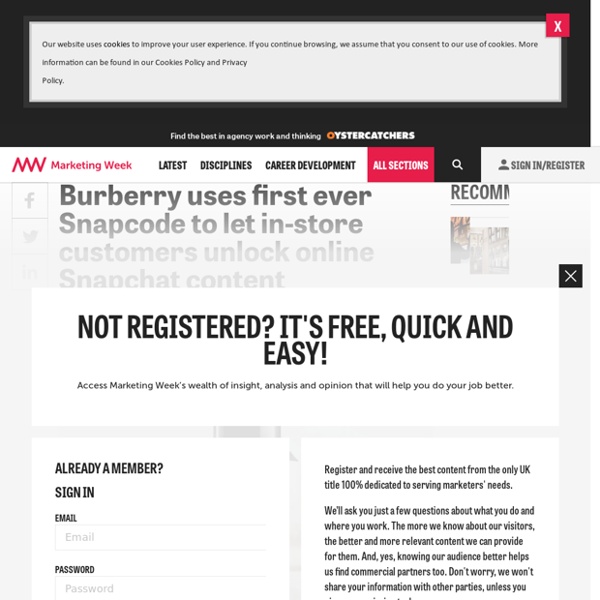 The Snapcode allows in-store shoppers to scan a barcode using their mobile device to unlock content from Burberry’s new campaign for male fragrance Mr Burberry. Burberry is running the content on Snapchat’s Discover channel, offering access to style and fragrance content, including tailoring and grooming tips. The channel will also feature the full-length director’s cut and behind-the-scenes content from the campaign. The content will be available for two months. READ MORE: Burberry in Snapchat first as it premieres new fashion collection online Launching today (4 April) and directed by Oscar-winner Steve McQueen, the ad tells the story of a couple madly in love. From 25 April, there will be scent-dispensing posters in Knightsbridge, London, which will spray the fragrance directly onto the user’s wrist when inserted underneath the sensor. Customers are able to personalise their Mr. This is not the first time that the brand has used Snapchat and personalisation to engage consumers.

15 Examples of How Technology Innovates Fashion It was the great Coco Chanel who once said, “Fashion changes, but style endures.” Well, regardless of your thoughts on the matter, there’s another thing that changes along with fashion. It is technology. With the amount of innovation happening these days, it kind of makes sense to bring the two together. Inside Björk's Immersive New Digital Exhibition Björk has long considered technology to be “an enabler” – a “liberating science” which allows her to realise her extraordinary soundscapes in unprecedented new ways. She spoke about this with great candour at the press preview of her innovative new virtual reality exhibition, Björk Digital, where she appeared (rather appropriately) on a large, flesh-coloured screen as a virtual avatar – composed of shiny ergonomic limbs and soft, impish features that are remarkably akin to her own. Notably, the Icelandic artist’s artificial self contained a open red wound at its chest, alluding to the heartbreak that informed her latest album, Vulnicura (2015), and is expressed openly throughout the show in remarkable digital and video works.

London fashion week: why technology is in fashion At London fashion week the multibillion dollar worlds of tech and fashion are colliding like never before. For many, the launch of Apple’s new watch, announced this week with impeccable timing to coincide with the global fashion weeks, will mark an important turning point for fashion tech, a new sector with huge potential for growth. While Apple’s entry into the market is almost guaranteed to boost the industry’s profile, in reality the fashion industry has been driving fashion tech for years. Fashion tech is much more than just tech inside a timepiece, and nowhere is this more apparent than in London. In 2010, London Fashion Week was the first in the world to grant access to the masses by live streaming the runways.

Instagram reveals just how addicted fashion fans are Certain labels might be banning it from their runway shows but, as a platform for discovering brands, following your favourite designers and as a democratising tool to grant virtual access behind the scenes of major fashion houses, Instagram is unmatched. Now, results of a new report compiled by the app on the habits of European fashion fans has revealed the ins and outs of Insta activity. In unsurprising news, The Feed Fashion report found that the clothes-minded among us dedicate a lot of time to ‘gramming. Compared to the average user, European Instagrammers with an interest in fashion post three times more than the rest, consume five times more photos and check feeds 15 times a day. Luxury brands must redefine the way they do business There were times when China was the holy grail for global retailers. Logo-obsessed Chinese buyers seeking opulence were armed with cash fresh from the economic boom. Luxury retail brands flocked to the new market, with the result of 35% of sales for brands such as Omega, Harry Winston and Balmain coming from Greater China, according to estimates by Exane BNP Paribas. The region is responsible for a whooping 25% of sales at Burberry and 20% of sales at Prada. The strategy of growth by opening stores in emerging and existing markets is neither new nor unique to luxury retail.

"Technology is going to turn the entire fashion industry inside out" Fashion and technology: the digital revolution presents the "biggest challenge for fashion brands" according to digital fashion pioneer Francis Bitonti who asks: "How will an industry where value is communicated by exclusivity and craft cope with this new space?" (+ interview) The fashion industry has been slow to adapt to new technologies, says Bitonti, who warned: "Fashion brands are going to have to adapt to this, which is going to mean a shift in core values for many brands." The New York-based designer initially trained as an architect but has recently focussed on applying advanced manufacturing techniques to fashion, jewellery and accessories, including a 3D-printed dress for Dita von Teese and a pair of 3D-printed shoes. "We want to redevelop everything from design methodology to material and form, to distribution and production," he said.

14 copyright essentials teachers and students must know Using copyrighted material incorrectly can land teachers and students in hot water. Here’s what you need to know to stay safe. (Image by Gerd Altmann via Pixabay.com / CC0) Students and teachers toe a very fuzzy ethical line every day — many without even realizing it. Some end up on the safe side of the line, but others cross the line and cross ethical boundaries — and sometimes costly legal ones.