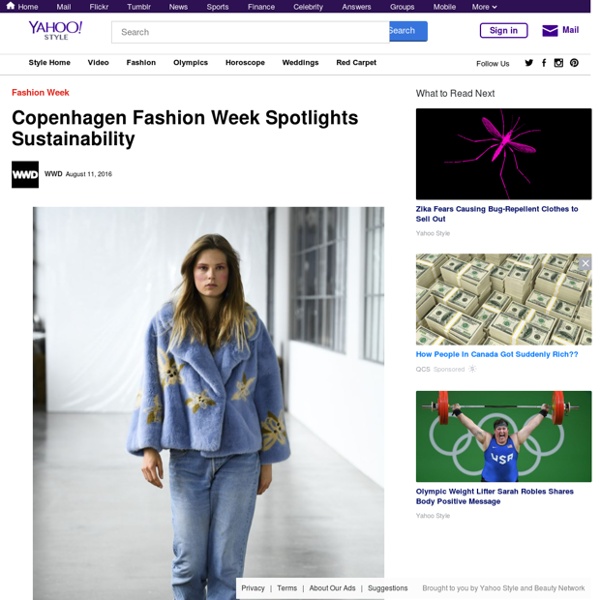 What Sustainability Means To The Millennial Generation Jo Godden, Founder of RubyMoon, discusses how brands can limit their environmental impact worldwide According to Goldman Sachs, there are around 92 million millennials in the US currently, making them the largest demographic in American history so far. Critically, they are also set to be the most important consumer group yet, with estimates of annual spending projected at around $200 billion by 2017, and $10 trillion over their lifetimes as consumers. With these figures comes the all-important question of how business can best cater to this multi-faceted millennial marketplace—the real questions being what do they value? Recent studies indicate that millennials have a new, insistent consumer appetite that is colored distinctly green. Although environmental concern is evidently widespread among this group, the mainstream fashion industry is, surprisingly, one that appears to have remained relatively untouched by this anxiety. This is why the revolution must begin at the top.

Vintage clothes priced by weight attract young shoppers Image copyright Jenessa Williams Anyone over thirty-five might look at you blankly if you mention vintage kilo sales, but they are increasingly popular with teenagers and students looking for cheap, fashionable clothing. Customers turn up to pop-up venues, often at universities, pick what they want and then pay according to weight rather than per item. Clothing wholesaler John Hickling and Judy Berger, who runs and markets vintage fairs, claim to be the first to have sold clothes like this in the UK. They started their Vintage Kilo events in Britain in 2009, when many consumers were still feeling the effects of the financial crash. They charge £15 a kilo which equals about five T-shirts, three or four dresses, or a heavy winter coat. It may be a relatively new phenomenon in this country, but shops selling clothes by the weight are popular in Holland and parts of eastern Europe. Fashionable thrift Appealing to thrifty necessity has spawned a profitable fashion business. Rebranding Trained eye

Melbourne Spring Fashion Week: Ethical threads in the spotlight Let's play celebrity word association with Isabel Lucas. Go. Home and Away actress. Environmental activist. Vegetarian. Bet you're not thinking the face of Melbourne Spring Fashion Week, simply because you associate her with a hippy, Coachellaesque kind of dressing down vibe, not a red carpet dressing up. Not so fast (fashion). It turns out that the fashion industry is in the midst of a crisis. Here's a non-inclusive list of problems that the industry needs to address with some (not all) well-known brands. And the city of Melbourne isn't trying to sweep it all under the rug. What makes all of this is so unusual is that the topic isn't necessarily a sexy one, and fashion is all about wrapping sexiness up in velvet and a designer logo. Still, even ethical designers know that there's a fine line between being mindful and having a gutful. But naming and shaming became a sticking point for local clothing company Gorman (which could not be contacted for this article).

Santiago Calatrava plans Zurich office block with 1000 bicycle spaces Architect Santiago Calatrava is set to create a grass-topped office block on the plaza in front of his Stadelhofen Station in Zurich with public parking for 1000 bicycles on the ground level. Calatrava unveiled designs for a "21st century office building" on the site 26 years after completing the railway station – now one of the busiest transit hubs in Switzerland, with 80,000 commuters passing through each day. Images show a glass building featuring bulging walls with slanted angles at the corners and a triangle of grass on the roof. The five-storey structure was commissioned by Swiss insurer AXA, and will be integrated with the station's public spaces. The 1000 parking spaces on the lower level are an attempt to tackle the overcrowding currently experienced in the plaza. Calatrava is the latest well-known architect to integrate cycling infrastructure into an otherwise commercial project.

Garnet Hill transforms shipping containers into mobile store his summer, e-commerce retailer Garnet Hill, a home and apparel brand under HSNi, created its mobile pop-up shop. The shop, which is a transformed shipping container, travelled down the upper east coast of the US and has just arrived in New York City. The first pop-up location kicked off near Garnet Hill’s headquarters in northern New Hampshire, back at the beginning of August, before the mobile establishment headed south, ending in New York City. This isn’t the first time we’ve seen shipping containers used as retail stores, it’s an interesting move for retailers. Garnet Hill’s PR manager, Jessica Greenhalgh of Cercone Brown & Co. The colours were neutrals-greys, whites, creams and woods. Visit the boutique shipping container at 11 Fulton Street, South Street Seaport in New York City from until September 22. ALWAYS TRAVELLING?

The inspiring story behind Nudie Jeans' sustainable denim hen it comes to trends and mass consumption, the denim industry isn’t exempt from the impact of fast-fashion. While the jeanswear scene is regarded as having one of the worst environmental and ethical footprints, there are some inspirational brands leading the way to encourage integrity and honesty in sustainable design. One such brand is Sweden’s Nudie Jeans, who are at the forefront of changing the way we wear and understand our jeans, championing an awareness in conscious consumption in the denim industry. Since launching in 2001, the Swedish organic denim brand has been on a journey turning its core values into core actions with its Eco-Correct credo. Nudie Jean’s long-term vision to produce organic collections was realised in 2012 when the brand delivered the first denim collection made with 100% organic cotton, a new standard for the Göteborg-based company. The company is also a member of the Fair Wear Foundation, which strives to improve working conditions in the textile industry.

English Village Becomes Climate Leader by Quietly Cleaning Up Its Own Patch “We said, ‘This is not about you tonight, this is about us, and you can listen to what we’ve got to say for a change,’” said Kate Harrison, a resident and early member of the group. No politician has been allowed to address the group since. The village has kept the effort separate from party politics, which residents thought would only divide them along ideological lines. The project was started by Garry Charnock, a former journalist who trained as a hydrologist and has lived in the village for about 30 years. “But even if we don’t,” he recalls thinking at the time, “let’s try to have a little fun.” Photo Sometimes, efforts to reduce greenhouse gases involve guilt-tripping or doomsday scenarios that make people feel as if the problem is too overwhelming to tackle. In Ashton Hayes — about 25 miles southeast of Liverpool, with a 19th-century Anglican church and a community-owned shop that doubles as a post office — the villagers have lightened the mood. Some have gone further. Mr.

11 things we learned about achieving a zero-waste fashion industry | Guardian Sustainable Business 1. A globalised fashion industry helps collect unwanted clothing Unwanted garments tossed into clothing bins have traditionally faced an ignominious future as filler material for insulation or stuffing for toys. But the globalisation of the fashion industry is giving our old clothes a second chance. 2. According to Leigh Mapledoram, programme area manager for textiles and public sector at Wrap: “Design plays a critical role as it has an effect on all process steps, from raw materials to end of life. 3. Rien Otto, founder and creative director of Dutch aWEARness, believes recycling fabrics will disrupt the current production chain. 4. Perkins says the industry needs more collaborations and industry partnerships to create the better materials needed and to recruit the facilities, mills and other producers in the supply chain to innovate. 5. Current mechanical methods can’t deal with blended fibre garments, points out reader CircularC. 6. A zero-waste fashion industry seems unlikely. 7.