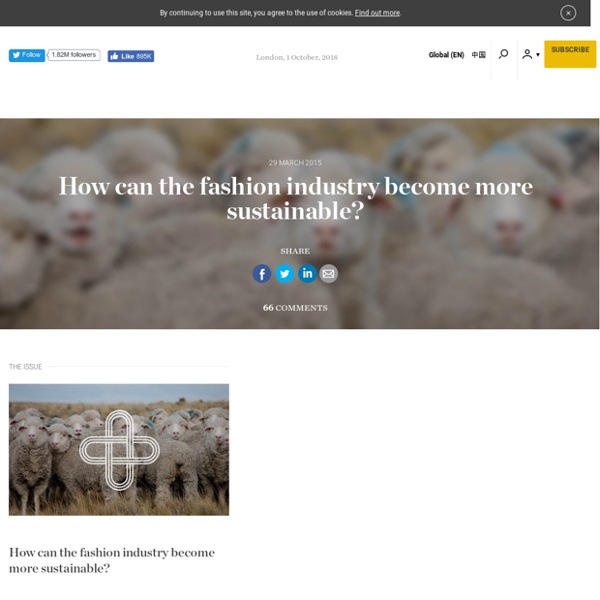 LONDON, United Kingdom — In a nondescript building tucked away on a quiet street in West London, Stella McCartney and her team are comparing the properties of a real leather shoe to the various non-leather swatches being considered for her brand’s Winter 2015 shoe collection. McCartney is wearing a cream blouse, open at the neck, with faded blue jeans and non-leather boots. Pinned up against the wall are boards labeled: “Heels,” “Mules,” and “Cutouts.” A large white table is scattered with moulds, lasts and uppers – as well as scissors, ID cards, empty glasses and a partially-eaten package of organic dark chocolate. Women of differing ages, ethnicities and body types come in and out of the room with a constant flow of new ideas and creative references while McCartney acts as a kind of real-time editor, deciding what colours, materials and shapes feel right for the upcoming season. Stella's Sustainability Commitments | Source: BoF At this point, McCartney turns to me, a fly on the wall.

Inditex: Agile Fashion Force From the very beginning, he resolved to create products in response to market feedback. He spoke on the phone with his stores every day to find out what customers wanted and what they were buying and tailored his production output to precisely match this demand. In today’s fashion industry, Inditex’s business model remains relatively rare. The Fashion Industry and Its Impact on the Environment and Society Editor’s Note: This post is part of the on-going collaboration between S&S and GreenBuzz to promote increased dialogue between sustainability practitioners, academic experts, and the general public. GreenBuzz chapters in different cities coordinate on-the-ground events for a word-of-mouth driven community of professionals engaged in sustainability, bringing sustainability leaders together to connect with each other and to discuss specific sustainability topics. S&S will publish excerpts, summaries, and discussions generated by these events in order to facilitate on-going debate and make the information presented at these events available to a world-wide audience. When we think of climate change, certain sectors, such as agriculture and transportation, are most commonly considered key in addressing climate change posed challenges.

Fast Fashion Is the Second Dirtiest Industry in the World, Next to Big Oil - EcoWatch “The clothing industry is the second largest polluter in the world ... second only to oil,” the recipient of an environmental award told a stunned Manhattan audience earlier this year. “It’s a really nasty business ... it’s a mess.” Since 2011, the Greenpeace Detox campaign has challenged some of the world's most popular clothing brands to eliminate all releases of hazardous chemicals. Photo credit: Jonas Gratzer / Greenpeace While you’d never hear an oil tycoon malign his bonanza in such a way, the woman who stood at the podium, Eileen Fisher, is a clothing industry magnate. On a warm spring night at a Chelsea Piers ballroom on the Hudson River, Fisher was honored by Riverkeeper for her commitment to environmental causes.

Fast fashion is “drowning” the world. We need a Fashion Revolution! “Nothing to wear?” Well here’s something to think about: Every piece of clothing we buy has had an impact on our planet before we even bring it home. That’s before you step out of the door, walk down the street, and spot that attractive item you see hanging in the window. Fashion and Water: The Thirsty Industry Ever thought about how much water it took to make your cotton t-shirt? How about three years worth of drinking water. For one t-shirt. That’s a lot of water in one shirt! 2,700 litres to be exact. Glacier Girl If you were one of the 70,000 people who attended the People’s Climate march in London last November, you would have seen two of the world’s fiercest eco-warriors leading the charge: one, a septuagenarian queen with an oversized crown, the other an icy-haired blonde telling you to ‘remember the glaciers’. Heir apparent to Vivienne Westwood’s throne as queen of eco-punk, 19-year-old Elizabeth Farrell is turning herself into a walking billboard for climate change. “Remember the Glaciers stemmed from my school art project exploring the correlation between globalisation, capitalist society, mass consumption and the environment,” Farrell told Dazed last year. Looking to address the existential threat of melting glaciers by turning capitalism on its head, she makes activism accessible to the Insta-generation via carefully constructed photographs.

glacier girl is reinventing the eco-friendly aesthetic for the tumblr generation Climate change is an issue that's so big it can be hard to comprehend, let alone connect with. We all want to do our bit and it helps if there's a person who can speak to us about it on our level. Someone who can reasonably explain why Arctic sea ice declining at a rate of 13.3% per decade is serious. Someone who can illustrate in an interesting way why the global average sea level rising nearly seven inches (178mm) over the last 100 years is dangerous. Someone who can show why the global temperature rising 1.4ºF puts all of our lives at risk. Luckily for us, Elizabeth Farrell has volunteered to be that person.