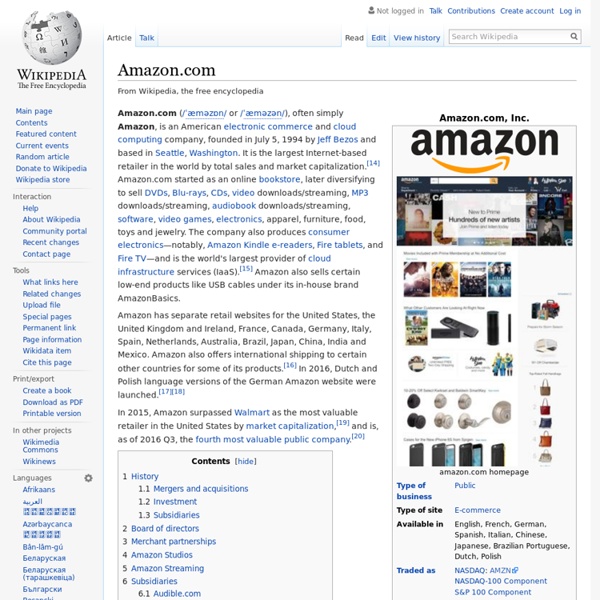 Amazon has separate retail websites for the United States, the United Kingdom and Ireland, France, Canada, Germany, Italy, Spain, Netherlands, Australia, Brazil, Japan, China, India and Mexico. Amazon also offers international shipping to certain other countries for some of its products.[16] In 2016, Dutch and Polish language versions of the German Amazon website were launched.[17][18] In 2015, Amazon surpassed Walmart as the most valuable retailer in the United States by market capitalization,[19] and is, as of 2016 Q3, the fourth most valuable public company.[20] History[edit] The company was founded in 1994, spurred by what Amazon founder Jeff Bezos called his "regret minimization framework," which described his efforts to fend off any regrets for not participating sooner in the Internet business boom during that time.[21] In 1994, Bezos left his employment as vice-president of D. E. Mergers and acquisitions[edit] Investment[edit] Subsidiaries[edit] Board of directors[edit] Goodreads[edit]

SOAP Characteristics[edit] SOAP can form the foundation layer of a web services protocol stack, providing a basic messaging framework upon which web services can be built. This XML-based protocol consists of three parts: an envelope, which defines what is in the message and how to process it, a set of encoding rules for expressing instances of application-defined datatypes, and a convention for representing procedure calls and responses. As an example of how SOAP procedures can be used, a SOAP message could be sent to a web site that has web services enabled, such as a real-estate price database, with the parameters needed for a search. The SOAP architecture consists of several layers of specifications for: message format, Message Exchange Patterns (MEP), underlying transport protocol bindings, message processing models, and protocol extensibility. History[edit] Specification[edit] SOAP structure The SOAP specification defines the messaging framework which consists of: Processing model[edit]

content Amazon unveils futuristic plan: Delivery by drone Amazon CEO Jeff Bezos had a big surprise for correspondent Charlie Rose this week. After their 60 Minutes interview, Bezos walked Rose into a mystery room at the Amazon offices and revealed a secret R&D project: “Octocopter” drones that will fly packages directly to your doorstep in 30 minutes. It’s an audacious plan that Bezos says requires more safety testing and FAA approvals, but he estimates that delivery-by-drone, called Amazon “Prime Air,” will be available to customers in as soon as 4-5 years. When Charlie Rose walked in and saw the Prime Air drones sitting on a tabletop for the show-and-tell, he exclaimed “Oh, my God!” “I only knew that there was a surprise coming. 60 Minutes associate producer Nathalie Sommer says even Bezos built up the surprise during breaks in filming the 60 Minutes segment. When Rose, Mihailovich, and Sommer finally saw the drones, they were perplexed. “I had no idea what its purpose was at first glance,” Rose told 60 Minutes Overtime.

criticism Shoppers looking for bargains this Christmas should give Amazon a miss because it doesn't pay its fair share of taxes, say a group of eight MPs led by the head of the public accounts committee, Margaret Hodge. "Amazon is one of the global companies that aggressively avoids paying tax on the profits that they earn from the business they undertake in the UK," Hodge told Ethical Consumer magazine, which is running a campaign to boycott Amazon. "Not only is this morally wrong but it disadvantages every business from the local community-based bookshop to bigger, British-based companies like John Lewis and therefore endangers British businesses and British jobs." Hodge famously called UK representatives of Amazon and Google before her committee earlier this year to give them a thorough telling-off for not paying their taxes. "I haven't used Amazon for a year and I have found plenty of alternatives for buying goods online," Hodge says. "There are many things we can do," Hodge says.

Drone: Unmanned aerial vehicle A group photo of aerial demonstrators at the 2005 Naval Unmanned Aerial Vehicle Air Demo. An unmanned aerial vehicle (UAV), commonly known as drone, is an aircraft without a human pilot aboard. Its flight is controlled either autonomously by onboard computers or by the remote control of a pilot on the ground or in another vehicle. The typical launch and recovery method of an unmanned aircraft is by the function of an automatic system or an external operator on the ground.[1] Historically, UAVs were simple remotely piloted aircraft, but autonomous control is increasingly being employed.[2][not in citation given] They are usually deployed for military and special operation applications, but also used in a small but growing number of civil applications, such as policing and firefighting, and nonmilitary security work, such as surveillance of pipelines. History[edit] The birth of U.S. FAA designation [edit] In the United States, shortly after,[when?] Classification[edit] U.S.

Martinelli-Waddel-5-07.pdf (application/pdf Object) The Guardian review If you commute or travel by tube, you could soon start to see lots more people reading books, magazines and even newspapers on "electronic paper" now that Amazon has started shipping its Kindle ebook reader internationally. The black-and-white six-inch LCD screen isn't as good as paper, but it's perfectly readable in most lighting conditions, and button-presses take you quickly from page to page. This is not to damn with faint praise, because the Kindle does have advantages over its paper parents. You can, for example, buy a new book in mid-journey, if you get bored with the one you were reading. A new novel downloads silently and automatically over the Kindle's mobile phone connection – Amazon's Whispernet – in a minute or less. And while Kindle is a bit smaller than a book, its 1.4GB of free memory can hold a lot more words. Amazon points out that the web browser and audio capabilities are currently free, experimental features, and are still under development.

A Conversation with Werner Vogels Related Content High Performance Web Sites Google Maps, Yahoo! Mail, Facebook, MySpace, YouTube, and Amazon are examples of Web sites built to scale. Improving Performance on the Internet When it comes to achieving performance, reliability, and scalability for commercial-grade Web applications, where is the biggest bottleneck? Browse this Topic: Favorite Tweets by @ACMQueue Queue on Reddit A Conversation with Werner Vogels Learning from the Amazon technology platform Many think of Amazon as “that hugely successful online bookstore.” Vogels came to Amazon from Cornell University, where he was working on high-availability systems and the management of scalable enterprise systems. Interviewing Vogels is ACM Turing Award winner and Microsoft Technical Fellow Jim Gray. JIM GRAY How has Amazon’s technology evolved over the past five years? Amazon.com started 10 years ago as a monolithic application, running on a Web server, talking to a database on the back end. WV Possibly. JG What about tools?

logo Java Tutorial 4 - Encapsulation and Classes This tutorial discusses the second and third fundamental object oriented programming principles of inheritance and polymorphism. The first fundamental principle, encapsulation, was discussed in the previous tutorial. Inheritance Inheritance is the capability of a class to use the properties and methods of another class while adding its own functionality. The Object class is the highest superclass (ie. root class) of Java. Java uses the extends keyword to set the relationship between a parent class and a child class. public class GraphicsBox extends Box The GraphicsBox class assumes or inherits all the properties of the Box class and can now add its own properties and methods as well as override existing methods. When extending a class constructor you can reuse the superclass constructor and overridden superclass methods by using the reserved word super. The reserved word this can also be used to reference private constructors which are useful in initializing properties. Abstract Classes