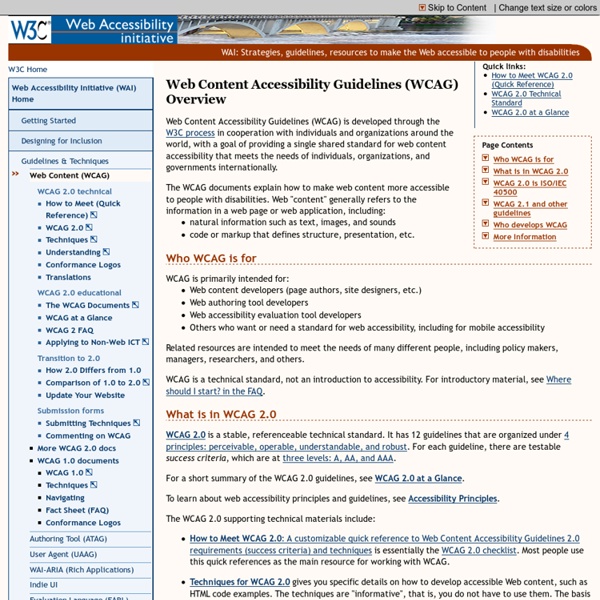 Introduction Web Content Accessibility Guidelines (WCAG) is developed through the W3C process in cooperation with individuals and organizations around the world, with a goal of providing a single shared standard for web content accessibility that meets the needs of individuals, organizations, and governments internationally. The WCAG documents explain how to make web content more accessible to people with disabilities. natural information such as text, images, and sounds code or markup that defines structure, presentation, etc. Who WCAG is for WCAG is primarily intended for: Web content developers (page authors, site designers, etc.) Related resources are intended to meet the needs of many different people, including policy makers, managers, researchers, and others. WCAG is a technical standard, not an introduction to accessibility. What is in WCAG 2.0 WCAG 2.0 is a stable, referenceable technical standard. For a short summary of the WCAG 2.0 guidelines, see WCAG 2.0 at a Glance.

image uploaded by @Hootsuite_U Off the Beaten Path: 6 Unusual Ways to Use Pinterest Pinterest is no longer just about food, clothes, and weddings. We have learned in the past the potential for business on this social network is great, and many awesome brands are now using it to generate revenue and gain customer loyalty. While many still rely on the social scrapbooking service for these traditional uses, lots of other creative applications are emerging. Did you know that Pinterest is also a great way to organize music? How about using Pinterest to find your lost pet, or report from a war zone? To Bust Criminals The days of seeing “Most Wanted” posters are behind us. To Reunite Families with Their Lost Pets On May 20th. 2013, Oklahoma was hit by some of the most destructive tornadoes in the area’s history. In hopes of reuniting animals with their owners, the Facebook page, Moore Oklahoma Tornado Lost and Found Animals, was created. By having all the lost animal photos organized, it was easier for people to share the images and find the missing owners. To Organize Music

The Ultimate Guide To Social Media Contests, 15 Steps The Ultimate Guide To Social Media Contests, 15 Steps It’s sometimes tricky, with social marketing, to separate your efforts from the “noise” of every other piece of content, news, and nonsense out there on the web. It is a challenge to establish and build meaningful relationships with your followers, with so much competing for their attention. That’s where social media contests come in. Contests are a great way to increase excitement and exposure of your company and brand socially while allowing you to crowdsource loads of content. If you plan on running a social media contest, use this timeline to successfully plan and execute the ultimate contest. Three Months Out You will not always have this much lead time before you create a contest. 1. Knowing your company’s goals and objectives will help you determine what type of contest to create and will enable you to evaluate success. 2. Read more on the difference between a sweepstakes and contest here. You need to decide: 3. 4. Two Months Out 5.

Is social media manager a stressful job? Is it worse if you’re a woman? | Lexi Rich, Marketing Maven I have a saying hanging in my home office that says, “Look like a girl, act like a lady, think like a man, work like a boss.” Am I putting too much pressure on myself by adopting this motto? Chapter 83, of Chris Brogan’s book, Social Media 101: Tactics and Tips to Develop Your Business Online, “How to Do More With Less Time,” made me a little anxious. If you’re self-employed, you’re on the job 24/7. I was reminded of an article I read earlier this week by actress Zosia Mamet, here. I didn’t know that most social media managers were female, as stated in Digiday’s “Confessions of Big Brand Managers,” but I can understand why. For both men and women, I agree with the LinkedIn article that we need to be more than just social media managers. I worry that a career in social media, given how new and how fast-paced it is, plus being a professional woman in the modern age and generally an overachiever, will never let me rest. Like this: Like Loading...

Everything You Need To Know About Google Primer How many startups failed to take off solely due to marketing inexperience? Numbers show that lack of market insight and wasted advertising budget make up for 11% of new business failure. In an attempt to decrease the skills gap between online marketing veterans and those just entering the business, Google launched Google Primer,—a new app that promises to teach you the ropes of online marketing in 5-minute lessons. What: A new iOS app from GoogleWhy: To teach digital marketing basics in a simple, efficient wayHow much: FreeWhere you can get it: App Store Here at Hootsuite, we address the digital skills gap with multiple resources available through Hootsuite University. According to the app’s website, Google partnered up with marketing professionals to create content valuable for startups’ digital marketing efforts. Primer currently offers lessons in three categories—content marketing, PR and media, and search advertising—with more topics to be added later.

Check Out Snapchat's First Ad for 'Ouija' Movie Snapchat's first sponsored message arrived today, and it was a video ad from Universal Pictures previewing its movie Ouija. The ad was sent to users' "Recent Updates" feed where messages from friends typically appear. Snapchat said Friday that ads would be coming, and was frank about why: "We need to make money," the company said. It was unclear how many of the apps' estimated 100 million users received the sponsored snap from Universal. Users had the choice to click on the ad or not, "No biggie," as the company said in its recent blog post. It was a 20-second video trailer for Ouija that played when users pressed their screens as if they were viewing any other message. IHeartRadio Goes on College Tour With Instagram Vending Machine IHeartRadio is touring the country with a T-shirt vending machine that accepts Instagram photos as payment. The marketing effort has racked up 5.7 million impressions—likes, shares, views—in the first week on the photo-sharing app, according to iHeartRadio. The five-week campaign (which runs through Nov. 15) stops at 10 college campuses in the Midwest and South, including Arizona State University, the University of Texas and Florida State University. "It's a mobile-first generation that we wanted to engage with and typically you've got college students who are away at school, and iHeartRadio is a natural way for them to stay connected with their hometown radio station," said Chris Williams, svp of iHeartRadio programming. At each university, the iHeartRadio team sets up a vending machine that swaps Instagram photos for free merchandise. The company didn't say how many campaign photos have been uploaded so far.

What to Charge for Social Media Work (as a Freelancer or Consultant) Looking to make money from your social media skills? Check out my popular guides: How to Build a Part-Time Social Media Business and How to Create a Freakin’ Fabulous Social Media Strategy. With more companies and organizations looking to hire social media help, and more social-media-savvy young professionals recognizing that opportunity, the same question keeps landing in my inbox again and again: How much should you charge for social media consulting? Social media consultants charge rates across the board using a variety of fee structures – from $15/hour to thousands per project. How do you know where you fit in? Here are a few tips for helping you figure out how to charge and what to charge next time an opportunity comes your way: What to Charge Per Hour Social media consultants charge anywhere from $15-$250+ an hour. Work Experience. This also applies to whether you’ve worked specifically in the social media field. Type of client. Location. What to Charge Per Project Got questions?

Social Media Management | How Much Does Social Media Cost It seems that most people in business are starting to realize that social media, though free, really doesn’t do much unless you put a lot into it. Who has time to manage a facebook and twitter account, let alone set up a killer strategy? Here’s an interesting article that lays out some costs for social media. Prepare yourself – it’s not cheap. And don’t worry – I’m not in the social media game so I’m being very objective with these prices. Here’s a breakdown: Here’s the prices: Blog: Get a blog built starting from zero, including design, and having someone manage all your content and customer relationships (comments and emails, etc) - $1,000-$12,000 a month, median of $4K. Blog posts written on your behalf – $50-500 Blogging is one of the best ways to jack up your SEO efforts, so make sure you have someone who knows a ton about SEO. Twitter: Start from zero, have a page designed, post creation, actively finding new followers, managing messages – $1,000-$4,000 a month. Facebook: The Bottom Line: