What Brexit Means for the Fashion Industry 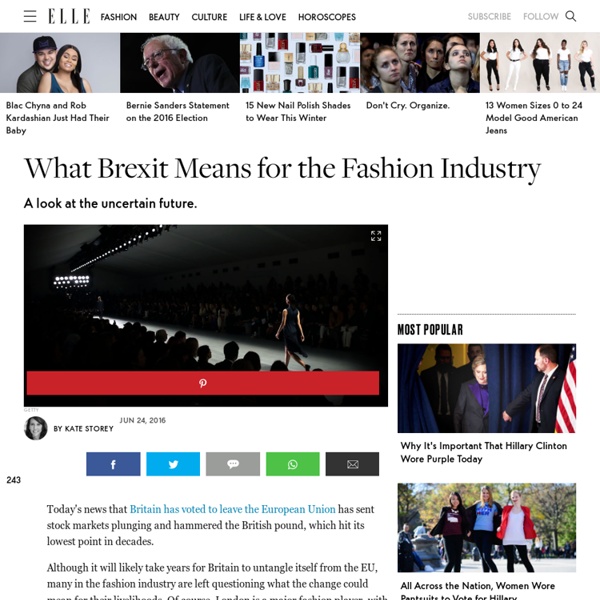 Today's news that Britain has voted to leave the European Union has sent stock markets plunging and hammered the British pound, which hit its lowest point in decades. Although it will likely take years for Britain to untangle itself from the EU, many in the fashion industry are left questioning what the change could mean for their livelihoods. Of course, London is a major fashion player, with the fashion industry contributing an estimated $38 billion to the UK economy in 2014, according to the Business of Fashion. Advertisement - Continue Reading Below A weak pound and uncertainty about new tariffs could mean major challenges for UK-based businesses, which often source fabrics and produce in other parts of Europe. Before last night's vote, the British Fashion Council surveyed its members and found that the vast majority—90% of members—wanted to remain in the EU. This turmoil is predicted to affect prices of items coming into and out of Britain, as well. Getty

Made in Ethiopia: Fashion's Next Sourcing Hub? ADDIS ABABA, Ethiopia — All is not what it seems in the Ethiopian capital. Had you failed to notice the small huddle of men wearing hard hats discussing ‘lean manufacturing,’ you might have mistaken last month’s shoe factory tour for a religious festival. Dressed in their finest Abyssinian gowns, a group of Ethiopian women greeted guests with rose petals as frankincense wafted through the air inside a building of immense proportions. Surrounded by local dignitaries in sharp suits watching the hostess perform an elegant coffee ritual, the delegation of casually-dressed Americans looked understandably self-conscious.

Fashion’s most iconic political statements As the date of the UK election draws nearer, politicians have turned their attention to fashion and pop culture in an attempt to wrest the youth vote. David Cameron has claimed Kardashian kinship, Nick Clegg has starred in an “Uptown Funk” election anthem, and the Labour Party has channelled Katharine Hamnett with their “Hell Yes” slogan tee. These recent antics come as no surprise – fashion and politics have long been linked. Last week we paid tribute to Dame Vivienne Westwood’s best protests, one of the great masters of using fashion as a vehicle for social commentary. Now we turn our attention to other designers who have used their clothes to shine a spotlight on important issues. From men’s skirts, anti-terrorist slogans and Pussy Riot films, to penises on the catwalk, feminist runway protests and reflections on wartime hardships, here are the most memorable political statements in fashion history.

Online-Only Asos Shines, Brexit Bad For Fashion "Asos Outshines High-Street Rivals as Online-Only Model Bears Fruit" (The Financial Times) "The Aim-quoted online retailer is enjoying sales growth that its high-street rivals could not even dream of." "Brexit: What Does It Mean for Online Retailers?" (The Guardian) "With currency fluctuations and the potential burden of tariffs and taxes, e-tailers worry that leaving the EU will come at an almighty cost." "Using an Algorithm to Figure Out What Luxury Customers Really Want" (Harvard Business Review) "The enormous volume of data collected from mystery shoppers, online reviews, social media, blogs, and ratings agencies about customer preferences and experiences has become too overwhelming for any business to assess." "Google Faces New Round of Antitrust Charges in Europe" (The New York Times) "Announced on Thursday, a new round of antitrust charges against the company — the third set since early 2015 — claiming that some of the company’s advertising products had restricted consumer choice."

The Impact of Pop Art on the World of Fashion – From Art to Industry and Back Ever since pop art emerged in the fifties, it has been going hand in hand with the fashion industry. Rebelling against elitist values and self-reflexive expressionist movement, pop art embraced mundane living experiences, introducing aspects of mass culture and bringing art closer to the new generation of Americans who were starting to experience all benefits of the consumer paradise in the welfare state of post-war America. Pop art employed familiar mass culture imagery from advertisements to other banal objects, wrapping it into sensational and bold color combinations. Richard Hamilton, one of the pop art pioneers used to describe pop art as “popular, transient, expandable, low cost, mass-produced, young, witty, sexy, gimmicky, glamorous, big business”. All these qualities pop art shared with consumerist culture and fashion industry as one of its main features. It wasn’t long before pop art and fashion merged.

Brexit’s impact on British fashion » Promostyl Blog Last Friday marked the start of London’s five-day fashion week; the British capital’s first fashion week since Britain voted to leave the European Union after a referendum back in June. Even though international brands such as Versace, and Greece-born designer Mary Katrantzou exhibited their collections, as well as the British brand Burberry revealing its success by showing men and women’s clothes together for the first time, fears and concerns about the future of the British fashion industry still remain. Versace / Mary Katrantzou It is evident that the British fashion industry contributes greatly to the UK’s economy, having brought £28 billion to the country in 2015 alone, according to The Financial Times, and at the moment supporting almost 900, 000 jobs in all sorts of fields from manufacture to retail.

Fashion Show Review, Ready-to-Wear - Autumn 2016 MILAN, Italy — For all that it was a triumphant return to form, Miuccia Prada's menswear show in January turned out to be a mere appetiser for the deeper, richer women's collection she showed tonight.‎ That was partly a reflection of her own feelings: "A woman is so much more complex than a man. She has to be a mother, a lover, a worker, a beauty..." But it was the way the clothes mirrored those multi-facets — and the emotional states that accompany them — that made the show a tour de force. Longtime collaborator Frederic Sanchez’s soundtrack of female singers ran a full drenching gamut, from the fierceness of PJ Harvey, to the pain of Piaf to the chill anomie of Nico, by way of sterling accompaniment. Tears flowed backstage.

After Brexit, which way for fashion? The impact of Brexit on the fashion industry is daunting, brain-scrambling and multi-levelled. The industry directly contributed £28bn to the UK’s economy in 2015 and employs 880,000 in roles from manufacturing to retail. For many British designers and stores, there will be an immediate hit on costs and margins. Once Brexit has been achieved, it could jeopardise design talent and retailers within the global marketplace forever. Sample the FT’s top stories for a week

INTO THE FASHION: Cultural Influences On Trend Forecasting For everyone who works in the fashion business it is important to be able to recognize and to foresee social and cultural movements, in order to understand the fashion environment and to be able to operate in the direction in which the fashion industry will move. Being able to anticipate what will happen in the next future is what puts a fashion designer, a retailer or a fashion buyer in the position to make better decisions in their work. And in this, fashion is not at all an isolated industry but is connected to the rest of our life. Fashion reaches beyond clothing and into the way we choose to live our lives. Brexit is a disaster for British fashion Hadley, you’ve written on Brexit elsewhere in the paper, but not in your style column. Why is that? Robert, by email You’re right, Robert!

Why Brexit is good for the fashion industry On the eve of the EU referendum in June during London Collections Men it wasn’t hard to gauge which direction the fashion pack was leaning. Unsurprisingly, thanks to factors such as the EU support of many of the initiatives of the British Fashion Council (BFF) and the fact that myriad young designers work with factories and suppliers from Lithuania to Lisbon, the community is an outward-looking and inclusive bunch. Indeed, during the campaign the BFC reported that of the near-500 designers it polled, 90 per cent planned to vote for Remain. Now the world has changed and in the face of a probable Brexit, whatever individual’s feelings may be the UK fashion industry has to start accentuating the positive. An obvious short-term silver lining is the weakness of sterling on the international markets has made London a bargain bonanza for shoppers paying in dollars, euros and yuans while reports are that e-tailing is booming. Astonishingly, the effects were almost instantaneous.

Karl Lagerfeld on fashion, brexit and feline muses Euronews – Isabelle Kumar He’s an icon – often described as the Kaiser – The Emperor in German- because when you are creative director to some of the most important Haute coutures houses in the world – Fendi, Chanel and your own label – you can really say that you rule the fashion world. We are in Rome to celebrate 90 years of Fendi – and are going to meet none other than Karl Lagerfeld. Karl Lagerfeld many thanks for being with us in the Global Conversation. The meaning of luxury