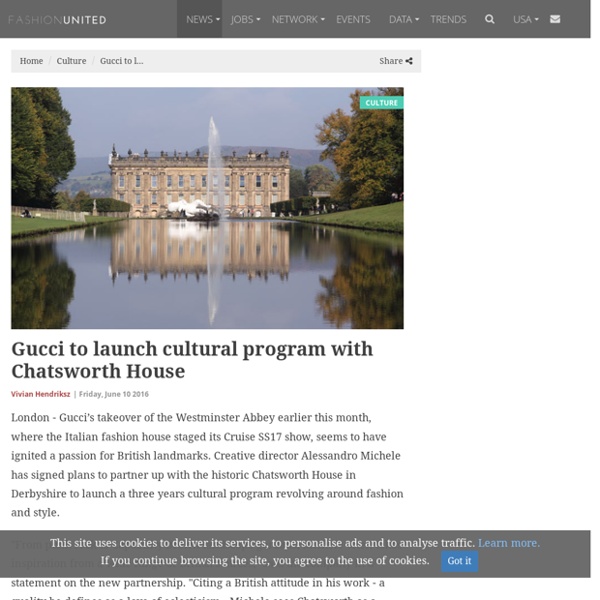 Most Famous Fashion Brands In this article we will talk about top 10 fashion luxury brands in the world. We all know that people are fond of fashion and want to wear something trendy. People purchase these brands to maintain their status and show off others. In past there was no trend of brands but in some recent years they have captured the whole market. Some major brands are famous all over the world and have captured the whole market like Louis Vuitton. In this modern time everyone wants to look beautiful and wore clothes and accessories according to it.

Art and Fashion: The Ultimate Collaborations The worlds of art and fashion are long intertwined; from Elsa Schiaparelli's collaborations with Salvador Dalí and Jackson Pollock's with Cecil Beaton, all the way through to Louis Vuitton with The Chapman Brothers and Prada with Elmgreen + Dragset. To celebrate the interaction between the two disciplines, fashion historian E.P. Cutler has compiled 25 of the most influential pairings and published a book, aptly titled Art + Fashion: Collaborations and Connections Between Icons, which explores creative relationships past and present. Here, she explores five of her favourites, exclusively for AnOthermag.com. Merce Cunningham x Rei Kawakubo"Rei Kawakubo’s 'Body Meets Dress, Dress Meets Body' collection (Spring/Summer 1997) inherently begs the question: Where does the dress end and the body begin?

Oasis x V&A Collection shop now: Laura Jackson models range Now that garden party season is finally upon us (we can see a teeny tiny bit of sun behind those clouds, honest) it's time to shop for some new outfits. Our first stop: Oasis. Why? Because Oasis has teamed up with the V&A Museum for an exclusive capsule fashion collection. We've seen it in person and it's lust-worthy. Regular shoppers of Oasis will know they love a good print, but now the high-street favourite brings to life some V&A prints that date back centuries. The 25 most powerful people in fashion Fashion You've landed on our old Fashion site Visit our new Fashion or Beauty sites for the latest articles Why Cultural Appropriation Is Still A Problem In The Fashion Industry We all know of the Kardashian-Jenner clan in some way or another. If you’re familiar with Kendall and Kylie Jenner, you may know they both model. Kendall Jenner is now a high-fashion model, and she recently walked the 2015 Victoria’s Secret fashion show. But, how did she earn this claim to modeling fame? She didn’t, of course. The industry headlines are filled with celebrities such as Kendall Jenner, Kylie Jenner and Gigi Hadid, who are known for other things besides their modeling abilities.

Fashion’s most iconic political statements As the date of the UK election draws nearer, politicians have turned their attention to fashion and pop culture in an attempt to wrest the youth vote. David Cameron has claimed Kardashian kinship, Nick Clegg has starred in an “Uptown Funk” election anthem, and the Labour Party has channelled Katharine Hamnett with their “Hell Yes” slogan tee. These recent antics come as no surprise – fashion and politics have long been linked. Last week we paid tribute to Dame Vivienne Westwood’s best protests, one of the great masters of using fashion as a vehicle for social commentary. Now we turn our attention to other designers who have used their clothes to shine a spotlight on important issues. From men’s skirts, anti-terrorist slogans and Pussy Riot films, to penises on the catwalk, feminist runway protests and reflections on wartime hardships, here are the most memorable political statements in fashion history.

10 of Fashion's Most Avant-Garde Designers From Coco Chanel’s popularization of the suit to Christian Dior’s full-skirted New Look, the ongoing evolution of fashion has existed largely on the innovations of the visionaries. For those creative and revolutionary enough to concoct an idea backed up only by their own convictions, some have managed not only to enter the mainstream of fashion but be embraced wholeheartedly by its capriciousness. While many designers stay within the familiar bounds of what’s been deemed marketable and find their client base in clothing that is wearable and flattering, there are other designers whose nearly surrealistic convictions have put them a little outside of the mainstream. Though a thick line exists between ready-to-wear and the avant-garde, a few designers have opted to leave their clothing with the mark of something a bit more extraordinary. Yohji Yamamoto Thierry Mugler