Faux Fur is the Only Responsible Choice 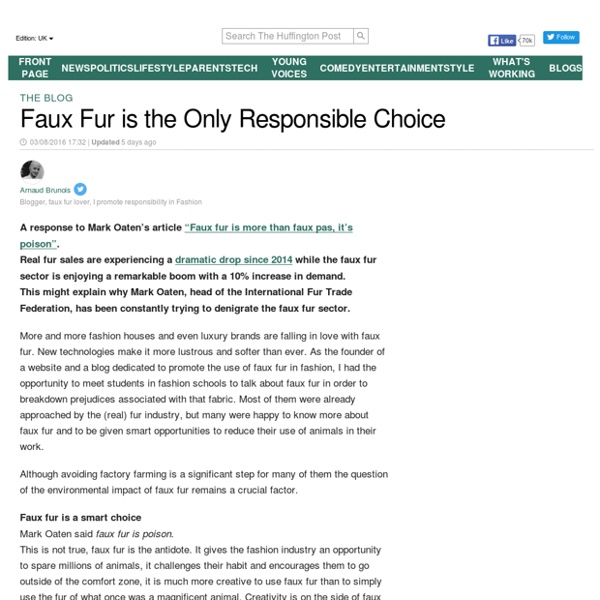 A response to Mark Oaten’s article “Faux fur is more than faux pas, it’s poison”. Real fur sales are experiencing a dramatic drop since 2014 while the faux fur sector is enjoying a remarkable boom with a 10% increase in demand. This might explain why Mark Oaten, head of the International Fur Trade Federation, has been constantly trying to denigrate the faux fur sector. More and more fashion houses and even luxury brands are falling in love with faux fur. New technologies make it more lustrous and softer than ever. As the founder of a website and a blog dedicated to promote the use of faux fur in fashion, I had the opportunity to meet students in fashion schools to talk about faux fur in order to breakdown prejudices associated with that fabric. Although avoiding factory farming is a significant step for many of them the question of the environmental impact of faux fur remains a crucial factor. Faux fur is a smart choice Mark Oaten said faux fur is poison.

Faux Fur is More Than a Faux Pas, it's Poison One of the arguments most beloved of the anti-fur lobby is that fake fur is actually better for the environment than the real thing. That argument, however, is as fake as the apparel it supports. And some new research has thrown the whole issue around man-made fibres more generally into the limelight. Specifically, researchers at the University of California at Santa Barbara have found that, on average, synthetic fleece jackets release 1.7 grams of microfibers each wash. and that this is having a devastating effect on our rivers, oceans and marine life.

Do We Have a Responsibility Towards Sustainable Living? Kevin Dooley - Flickr Creative Commons Hands up if you walk into a shop and before you purchase anything, think about how it was made? For many people the answer is probably no! Without passing judgement on buying choices, many of us pick up the cheapest item and don’t give much thought to where and how it got there. How PETA Won the Angora Debate and What It Means for Fashion NEW YORK, United States — In the spring of 2016, a group of top-tier fashion executives convened in midtown Manhattan for a closed-door meeting. The conversation centred on the treatment of animals and the ethics policies they had in place. It was clear that many brands felt more pressure than ever to cooperate with the People for the Ethical Treatment of Animals — the international non-profit organisation widely known as PETA. “Look at what PETA did to angora,” one executive said. “They virtually wiped it out.”

Russian mink farms where thousands are slaughtered and left to rot to make $1m coats These disturbing pictures expose the macabre truth about the fur farms in Russia and China which supply the fashion market in the world's leading cities, including London, Paris and New York. Across ten time zones, the images show the reality of mink and sable gulags - many set up during the harsh Communist past - where prized animals are bred for slaughter, bringing in millions of pounds to the Russian economy every single year. An investigation by MailOnline also reveals the appalling conditions in which wild animals, including different types of fox, are captured and killed, from being skinned alive to being poisoned by the faeces in the air, and reveals the heartless farm owners who can't see beyond their profits.

Fur-free coats and wood heels: study a master's in sustainable fashion Gone are the days when sustainable fashion meant hemp shirts and ropey shoes. As designer Stella McCartney has shown, fashion can still be luxurious, beautiful and desirable, without wrecking the environment or exploiting workers. Witness her platform shoes with sustainable wood heels or her fur-free coats – albeit not at high-street prices. “Every industry has to be pushed; the fashion industry is no different,” she said in the documentary on the clothing business The True Cost. Since the collapse of the Bangladeshi factory Rana Plaza in 2013, which killed more than 1,000 workers and injured about 2,500, some consumers are beginning to reject “sweatshop” fashion, and a shift towards more ethical practice is ultimately inevitable, commentators believe – though slow to arrive. “When a designer makes a decision in New York, in a matter of hours that affects people in Bangladesh,” says Sue Thomas, associate professor in fashion at Heriot‑Watt University in Scotland.

Sustainability in the Fashion Industry - Supply Chains Effect on the Environment As one of the biggest players in the global economy, the fashion industry has a responsibility to help protect the environment. We’re commemorating this Earth Week by asking some tough questions about our impact on the planet and what we can do about it. We’ll also be profiling people and companies who are instigating change. Vintage clothes priced by weight attract young shoppers Image copyright Jenessa Williams Anyone over thirty-five might look at you blankly if you mention vintage kilo sales, but they are increasingly popular with teenagers and students looking for cheap, fashionable clothing. Customers turn up to pop-up venues, often at universities, pick what they want and then pay according to weight rather than per item.

The place where cast-off clothes end up If you give clothes away to charity or for recycling, there's a good chance they will pass through a warehouse in the Hungarian town of Szekesfehervar, writes Nick Thorpe. Geza, Grand Prince of the House of Arpad, founded Szekesfehervar or "the seat of the white castle" - now a bustling town of 100,000 people - in the year 972. The whiteness of the castle, they say, was either due to the dazzling colour of the stones, or to the custom of whitewashing the walls.

Stella McCartney Admits That Even She's Not 100% Eco-Friendly In late April, the Financial Times’s (and soon to be New York Times's) Vanessa Friedman gave a speech at the Copenhagen Fashion Summit on the paradox of sustainability in the fashion industry. With designers piling on season after sub-season, the imperative to push new styles stands in opposition to any notion of permanence, Friedman argued. There are a few sides to sustainability in fashion. One is the manner in which a product is made — be that environmental practices or the treatment of workers, the failing of which was tragically exemplified in the Rana Plaza factory collapse last year. The other is the rate at which consumers are expected to replace that product with the next, more stylish thing.

Clothing retailer H&M launches ‘World Recycle Week’ - letsrecycle.com Clothing retailer H&M has today (18 April) begun its ‘World Recycle Week’ campaign and is aiming to collect 1,000 tonnes of old clothing from customers across its 3,600 stores worldwide. During the campaign, running from 18– 24 April, shoppers will receive a 30% discount in-store in exchange for the unwanted or worn out clothes they bring in – an increase on the normal 15% discount for shoppers donating unwanted clothing. H&M’s Oxford Circus store is one of the branches taking part in the company’s ‘World Recycle Week’ (Picture: letsrecycle.com) In 2013, the Swedish fashion brand launched a global garment collection initiative – meaning participating customers could exchange a bag of their unwanted clothing for a £5 voucher to spend in store. The high-street retailer claims that since the initiative launched, 25,000 tonnes of unwanted clothing has been collected. According to H&M once delivered in-store customers’ unwanted garments are shipped to one of seven sorting plants worldwide.

The Journey of an Upcycled Life I just thought if I’m moving somewhere, I’m going to take what is important to me. I thought of my sewing machine because I am a designer. That is what I do. I make stuff. So I lugged my sewing machine through New York’s turnstiles. Natural dyes v synthetic: which is more sustainable? “I have workers in my factory who spend two to four hours everyday going to collect water, with no guarantees they’ll even find it,” says Sonal Baid, founder of Aura Herbal Wear, who blames synthetic dye factories for polluting local water sources. Baid and her husband, Arun, have figured out how to use natural dyes at scale at their factory in Ahmedabad, India. Now, they want to convert India’s textile manufacturers, taking them back to natural dyes on natural fabrics, a tradition that Baid said was commonplace in the country until 40 years ago, when synthetic dyes took off. Discovered in the mid-19th century by English chemist William Henry Perkin, mauveine, the first man-made colour, transformed textile manufacturing. These synthetic colours allowed manufacturers and dye houses to operate in large quantities, and offer vivid, rich colours.