The 15 Most Useful Google Apps You Never Knew Existed 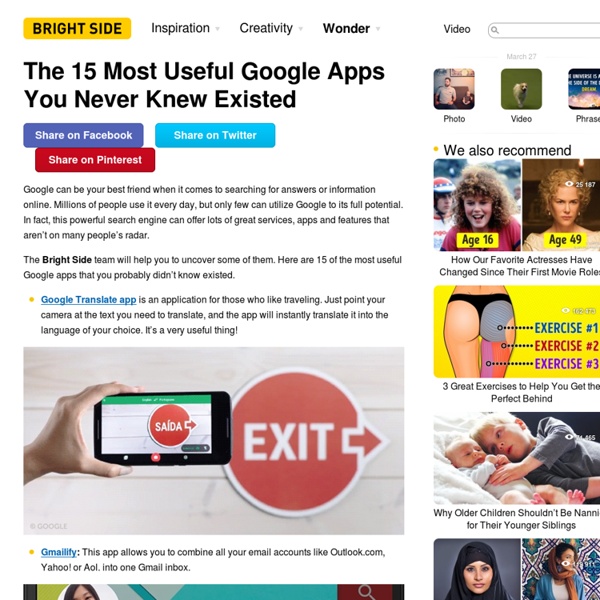 Google can be your best friend when it comes to searching for answers or information online. Millions of people use it every day, but only few can utilize Google to its full potential. In fact, this powerful search engine can offer lots of great services, apps and features that aren’t on many people’s radar. The Bright Side team will help you to uncover some of them. Here are 15 of the most useful Google apps that you probably didn’t know existed. Google Translate app is an application for those who like traveling. Gmailify: This app allows you to combine all your email accounts like Outlook.com, Yahoo! Google Scholar is a search engine that searches across scholarly literature. Google Keep is an app for creating bright colorful notes. Timer. Google Sky. Google Fonts is a search engine that helps you find the best fonts for your projects. Google Art Project. Think with Google. Google Trends. Panoramio. Google Sound Search is a great music recognition app similar to Shazam. Related:  Google

The perfect game – El juego perfecto – nataliaenriquericardo Here it is, my last unit plan for the school year. I have never been a fan of any kind of sports because culturally speaking, sports are not meant for females, they are to be played and pursued by males. However, living in a home where the Yankees, the NY Giants, and Chelsea are teams that are constantly watched, whether in person or on television, I have had no choice but to join the party boat. For one, I am now the oddity and the rival in my own house, as I have chosen to follow the St. Louis Cardinals as my ultimate favorite baseball team. Needless to say, this is not good in a Yankee’s house…but, such is life. Anyhow, the plan you will see here uses the movie The Perfect Game to bring comprehensible input to my students, and in that process, talk about sports, food, sportsmanship, goals, and cultural aspects that are clearly displayed in the movie. Go St. Like this: Like Loading...

5 Alternatives to Windows 10 from Google - dummies By Woody Leonhard Google has a handful of free online products and offerings that warrant your attention. Here are the five Google products, other than Chrome OS, that serve as alternatives to Microsoft offerings: Gmail: A free, online mail program, similar to Microsoft’s Hotmail/Outlook.com. Google is gradually phasing out the use of the terms Google Docs and rolling all the programs into the term Google Apps, and the umbrella Google Drive. Google Apps for Work: A combination of several web apps — Gmail, Docs, Calendar, Groups (see the next bullet), and Sites (team collaboration) — and 30GB of Google Drive storage with a framework that lets you run your own domain name through Google’s programs. Technologically, Google Groups has been more or less upstaged by Facebook private pages and by Google Hangouts (a real-time video meeting place). There’s one big difference between the free Google Apps and Google Apps for Work/Education/Nonprofits. There are some if’s, and’s, and but’s.

The Road Not Taken by Robert Frost | Poetry Foundation Robert Frost wrote “The Road Not Taken” as a joke for a friend, the poet Edward Thomas. When they went walking together, Thomas was chronically indecisive about which road they ought to take and—in retrospect—often lamented that they should, in fact, have taken the other one. Soon after writing the poem in 1915, Frost griped to Thomas that he had read the poem to an audience of college students and that it had been “taken pretty seriously … despite doing my best to make it obvious by my manner that I was fooling. … Mea culpa.” However, Frost liked to quip, “I’m never more serious than when joking.” “The Road Not Taken” begins with a dilemma, as many fairytales do. Two roads diverged in a yellow wood, And sorry I could not travel both And be one traveler, long I stood And looked down one as far as I could To where it bent in the undergrowth … In his description of the trees, Frost uses one detail—the yellow leaves—and makes it emblematic of the entire forest.

Pictocuentos :: Comunicación sencilla con pictogramas Control Alt Achieve: Using Google Keep for Grading Comments in Docs One of the great features of Google Docs is the ability to leave comments in the margin. This is a useful way to provide helpful feedback to students when grading their work. You can offer suggestions, point out areas that need correction, highlight great work, and even provide links to additional resources or videos. As great as that is, one of the challenges has been getting easy access to your list of comments. Over time, you may have collected quite a large list of often used comments. Rather than have to type them in each time, it would be much easier if you could simply pull up the list and copy and paste the comments you need. Certainly there are creative ways to accomplish this, such as having another Google Doc with all the comments listed, and then switching back and forth between that Doc and the one you are grading. Thankfully though there is now an even easier way to do this. Step #1 - Creating Your Comment Lists in Google Keep Step #3 - Adding Your Comments from Keep to Docs

How to Lose Weight: The Method That Works - Motto I had finally reached my breaking point. It was spring 2013, Easter Sunday to be exact, and I was tired, out of shape and perpetually uncomfortable. As a girl who always had a sunny disposition and grew up in a family of glass-half-full thinkers, I didn’t feel right. After an indulgent dinner that evening that left me feeling awful, I’d finally had enough. I realized this was not the kind of life I wanted to live. As I went to bed that evening, I thought about all of my previous attempts to adopt healthier habits and wondered where I’d gone wrong. During any given attempt at being “healthier,” I’d focus on everything that I wasn’t doing: the weight that I wasn’t losing and the things that I shouldn’t have been eating or drinking. Subscribe to the Motto newsletter for advice worth sharing. So that evening, I decided to radically change my perspective and be kinder to myself. Something really amazing happened along the way. 1. Find out how to use music to motivate yourself: Loaded: 0% 2. 3.

Ideas for Studying Semana Santa & las Pascuas | Sol Azúcar by Catharyn Crane As a public school teacher, semana santa and las pascuas are topics I typically tended to steer away from in Spanish class. I did this because I didn't want to worry about bringing religion into my classroom. This was so narrow minded. When exploring the culture of the Spanish speaking world, to ignore Catholicism, its holidays, and cultural practices would just be ridiculous. We Spanish teachers know this, but how do we justify teaching these topics? Here are three simple rationales:The VAST majority of Latin Americans are Catholic (see this Pew study for statistics). Here are a few ways to bring semana santa and pascuas to your middle or high school Spanish classroom. Make Cascarones Cascarones are hollowed out egg shells that are filled with confetti. This blog post details step by step how to make them. Engage Students in Inquiry with Media Resources I adore using video and podcast resources as a meaningful technology integration. Take an Hour for a Purely Cultural Lesson

7 Little-Known Google Tools That Will Make Your Life A Lot Easier Practically everyone knows that Google is the world's largest search engine. In fact, most people who own a computer or a mobile device are pretty familiar with other popular Google products too, such as YouTube, Gmail, Chrome Web Browser, and Google Drive It turns out that when it comes to Google, the tech giant has a lot of different products. Over the past 18 years of its short lifespan, Google has created over 140 products. While using that many tools is probably overkill, it's always worth looking into the ones that could really help solve problems you regularly have, save time you'd rather not waste or accomplish something more creatively and efficiently. Here are some Google tools that most people don't talk about much, but would be extremely handy to use in a wide range of situations. Need to record some audio for a reminder? Ever wished you could do a Google search for something according to what it looks like because you can't for the life of you remember what it's called?

This Map Reveals the Hidden Megaregions That Make Up the U.S. You might think you live in Washington State, but this map may suggest otherwise. A recent study by Garrett Dash Nelson and Alasdair Rae at Dartmouth College’s geography department has revealed a new series of “megaregions” based on over four million sets of commuter flow data. Sure, you could live in Washington, but if you’re commuting every day to Portland, which region are you really interacting with more? “Such a method hints at a possibility long promised by spatial scientists: a regionalization scheme which relies entirely on spatial laws, rather than contestable human interpretation,” the paper, published in the journal PLOS, reads. Essentially, the method the paper outlines could serve as a useful model for drawing regions for all sorts of uses - electoral districts, regional government boundaries, or even cross-provincial transportation authorities could all benefit from the paper’s methods. The team took census tracts and compared home and work places to create the map below:

estudiafeliz | Actividades divertidas y creativas para maestr@s y estudiantes de español 7 Everyday Google Tools That Are Facilitating Both Teaching and Learning - Causeartist Google has profoundly impacted how we integrate data into our lives, not only with their search engine, but also with their voice-activated personal assistant, Siri, and Maps application, which helps many of us use to make our way to our destinations. But the tech giant hasn’t stopped at just work and personal life. The company is making strides to improve learning in a fundamental way. And with all the Arizona colleges and the majority of US colleges joining the club in using Google products, we thought about creating a list of our favorites! Here are seven tools from Google that have changed education. 1. Google Scholar uses its famous search engine function to scour the web for reliable, academic sources. Using the advanced technology behind Google’s namesake search engine, Scholar can find relevant information to all topics verified to be from sources acceptable in an academic setting. Then, students can conveniently save their sources in organized folders for revisiting later. 2. 3.

How to Make DIY Herbal Tea from Herbs, Spices, and Citrus Think herbal tea is only an option after you've sucked down way too many cups of coffee? Think again. Herbal tea doesn't have to be code for decaf. Here's what you need to know to DIY your own: You can turn any herb, citrus fruit, or sweet spice into tea Making DIY herbal tea doesn't even require a teabag. Making your own blends is easy A simple tisane made from a couple strips of lemon zest is pretty delicious all on its own, but you'll also want to start experimenting to make combinations. Use up your odds and ends That leftover bunch of herbs that are starting to dry out in the fridge? Create a house blend you can sip anytime Once you find the combination of herbs, citrus, and/or spice that you love, you can make a big batch of your tisane mix to brew in a tea infuser anytime.