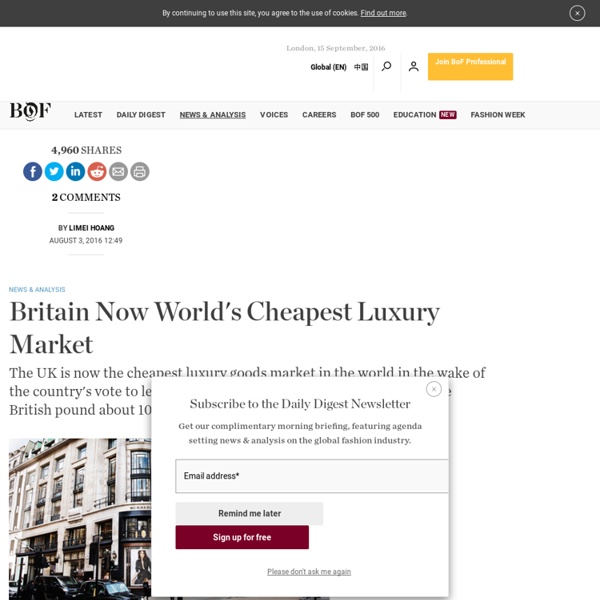 LONDON, United Kingdom — In the wake of Britain's vote to leave the EU, which pushed down the value of the pound about 10 percent against the euro, the country has become the cheapest luxury goods market in the world, helping to buoy British luxury labels, at least in the short term, according to new research by Luca Solca, the head of luxury goods at Exane BNP Paribas. "The Brexit vote has made the UK the cheapest market in the world for luxury goods,” Solca told BoF. “A weak British pound will boost travel inflows to the UK, helping British luxury goods players like Burberry, Mulberry and Jimmy Choo." While luxury goods companies are not expected to raise prices in the UK in the coming months — at least until there is more clarity around exactly when and how the country might exit the EU — Britain should see a boost from tourist inflows and spending due to its weakened currency.

Fashion's Richest: Top 10 Wealthiest Moguls in H1 2016 It is no secret that fashion sells. The global fashion industry is currently valued at an astounding 3 trillion US dollars, according to FashionUnited's global statistics page, making it one of the most valued sectors in the world. The only thing which sells more than fashion, is "fast fashion", which sells in enormous, unimaginable quantities. Savers to suffer as First Direct cuts rates further than Bank of England One of the UK’s most high profile savings providers has announced interest rate cuts in excess of the Bank of England’s recent base rate reduction. At the weekend, First Direct wrote to savers telling them it would be reducing returns on a range of accounts from 18 October. Two accounts will see cuts greater than the 0.25% reduction announced by the BoE on Thursday. First Direct’s cash Isa will have its rate cut by 0.4 percentage points, from 1.3% to 0.9%, while the rate on its bonus savings account will be chopped from 0.75% to 0.4%. A range of other accounts will be subject to a 0.25 percentage point cut.

Economic contribution The direct value of the UK fashion industry to the UK economy is estimated at £26bn, up from £21bn in 2009, according to data from Oxford Economics, the consultancy, published by the British Fashion Council. This represents an increase of 22 per cent in nominal terms between 2009 and 2014. If the indirect support for supply chain industries and the induced spending of employees' wages are added in, the total contribution from the UK fashion industry is £46bn.Oxford Economics estimates that fashion’s wider contribution to the UK economy in influencing spending in other industries has risen from £37bn in 2009 to over £46bn in 2014 - a 23 per cent increase.The UK fashion industry is estimated to support 797,000 jobs (down from 816,000 in 2009 which reflects an increase in productivity in the sector). Fashion is the largest employer of all the UK's creative industries. Source: The British Fashion Industry and London Fashion Week Facts & Figures, BFC, Feb 2016. Economic Value

From Bankruptcy to Billions: Fashion’s Greatest Second (and Third) Acts United Kingdom — In fashion, nothing is permanent. Even when creative directors flee their posts or companies shutter their operations, opportunities for reinvention are often waiting just around the bend. Indeed, some of today's most successful fashion businesses went through years — and sometimes decades — of financial turmoil before achieving the level of global success they enjoy today. Economy Of Fashion: How Different Trends Reflect The Financial State It's common knowledge fashion is cyclical in nature. The concept of “newness” in fashion doesn't refer to the premiere of a trend, but rather its revival. Why fashion cycles in this manner, however, is less obvious. There are lots of factors at play: cultural trends, politics, celebrity influence.

Retailers challenge national living wage Don-Alvin Adegeest London - While the government has thus far been successful in its policy to increase the UK's national living age, some businesses and retailers are keen for the policy, set to come into full affect by 2020, to be revised or abandoned. According to the Financial Times, 16 trade associations are challenging the policy, having written to new business secretary Greg Clark recommending he “exercise caution” on the national living wage in light of the “economic uncertainties the country faces” after the Brexit vote. The national living wage is one of George Osborne's legacy policies, to ensure over 25 year-olds earn a median income, which by 2020 would be just over 9 pounds per hour. The wage was increased as of April 1st this year to 7.20 per hour. Fashion chains, supermarkets and the hospitality sector are expecting to have to raise wages.

Burberry and Tom Ford Announce See-Now-Buy-Immediately Collections for September What a day of drama! February 5, 2016 might go down in history as the day it sank in that the whole fashion system is about to reconfigure. Hot on the heels of Burberry’s announcement that it will be launching a see-now-buy-immediately women’s and men’s show in September, Tom Ford has declared the same thing.

A ‘Brexit’ Would Be Bad for Fashion LONDON, United Kingdom — When the topic first began to trickle into parliamentary debate in early 2015, the notion of Britain exiting the European Union seemed absurd. Indeed, if the idea of putting the matter to a direct public vote appeared unlikely, an actual “Brexit” seemed completely implausible. But 18 months later, with a national referendum just weeks away and public sentiment stirred up by an unprecedented migration crisis on top of the on-going European debt crisis, which has seen countries like Greece bailed out by the rest of the Eurozone, opinion polls on Brexit are much too close for comfort for British prime minister David Cameron, who has staked his political future on a “Remain” vote.

Primark blames the weather for falling sales Image copyright Getty Images A warm winter and a cold spring has been blamed for a fall in sales at low-cost fashion retailer Primark. Shoppers left winter clothes on the rails in the run up to Christmas due to unusually warm weather, and a cold March and April depressed sales of summer clothes. As a result Primark, like other stores, had to cut the price tag to sell them. The retailer expects like-for-like sales, which ignore new-store sales, to fall 2% for the year to 17 September. "If the weather's warm consumers make do with clothes from the previous year," said Maria Malone, principal lecturer for fashion business at Manchester Metropolitan University.

Top 5 Global Cities To Live And Do Business In 2016 Article provided by Bayut.com When it comes to living in a foreign city, one has to consider the population, infrastructure, overall size, political context, per capita income and development path. The city’s economic growth, real estate developments and entertainment facilities also play a vital role in making decisions towards moving to a city or investing in it. Here we compile a list of five cities to look out for while aiming at living or investing internationally in 2016. Prada to Launch on Net-a-porter, Mr Porter – WWD LONDON — Prada is finally taking the leap into online selling in Europe, starting with Net-a-porter and Mytheresa.com. On July 15, Net-a-porter will launch its edit of Prada’s pre-fall and fall runway pieces as well as bags, shoes and small leather goods. The Net-a-porter introduction will take place the same day Mytheresa.com, part of Neiman Marcus Group, unveils Prada’s fall ready-to-wear collection on its online store.