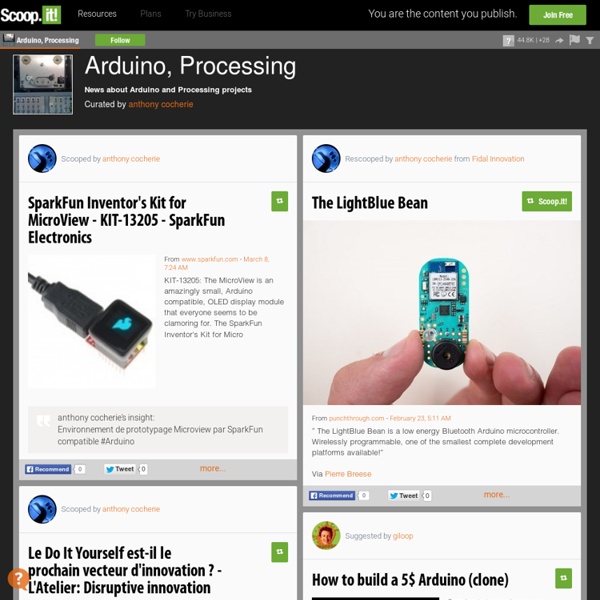 Your Arduino Yún includes two lightweight software components that make it easy to connect with hundreds of APIs and cloud services from any sketch. First, there's a small C++ library called Temboo.cpp that comes bundled with the Arduino IDE. When you include this library in a sketch, it provides a streamlined syntax for configuring and invoking calls to run Temboo Choreos. Behind the scenes, calls to Temboo are routed to a client program that comes packaged with your Linino base image. This client is a Python program that formats the Choreo execution request and uses HTTPS to forward the request to Temboo via the cURL utility. Via Axel

DIY Arduino PIR Motion Sensor Lighting & Security From the minds at We wanted to save energy, and create convenience, by adding motion sensors to our lighting circuits. Maybe you want some notification of an intruder. Both can be done with a PIR Motion sensor. When I walk into a room, the lights come on automatically, and when I leave, shut off after a short period of time. You can choose how long that time delay is in the code. Tutoriels Arduino - Ethernet + SD Whatsit? We just got the latest version of the Arduino Ethernet shield with a MicroSD card slot and I promised Bill Greiman I'd try out the latest version of his SdFatLib library so I decided to code up a simple Webified file browser. Its a quicky project and demonstrates what you can do, but it isn't 100% perfect so you should be ready to modify it if you'd like to do other stuff, 'K? This is a good beginning to a logging web-monitor, or remote storage system. Get familiar

ArduinoToBreadboard Learning Examples | Foundations | Hacking | Links This tutorial explains how to migrate from an Arduino board to a standalone microcontroller on a breadboard. It's similar to this tutorial, but uses an Arduino board to program the ATmega on the breadboard. Unless you choose to use the minimal configuration described at the end of this tutorial, you'll need four components (besides the Arduino, ATmega328, and breadboard): a 16 MHz crystal, a 10k resistor, and two 18 to 22 picofarad (ceramic) capacitors.

Système Adafruit apprentissage Introducing Bluefruit EZ-Link The ultimate serial Bluetooth link & wireless Arduino programmer We are excited to add another product to our growing Adafruit Bluefruit line, this time its the Bluefruit EZ-Link: the best Bluetooth Serial Link device ever made. Like you, we have purchased all sorts of Bluetooth serial link modules, with high expectations - we just wanted something that worked! But nothing ever did exactly what we wanted: there was always some configuration modes to wade through, and using one of those other modules to reprogram an Arduino is impossible. So we did what we always do, we went in and engineered something better.

Arduino Tutorial Bundle .:Arduino Experimentation Kit:. (ARDX) Before we go any further you'll need to download and install the Arduino IDE (Integrated Development Environment), this is the program we use to write programs for the Arduino. Step- 1 - Download the IDE The Arduino IDE is available for all major operating systems. Head over to and download the appropriate version.FOR WINDOWS' PixelController « PIXELinvaders What? PixelController – a matrix control project by Michael Vogt , (c) 2010-2013. The main goal of this application is to create an easy to use matrix controller software which creates stunning visuals! The Simple Idea behind This Mind-Blowing 3D Interactive Sandbox Playing in the sandbox used to be my favorite activity as a small child. I remember making pretend volcanos, rivers, lakes, and tunnels in the sand. Well, researchers at UC Davis have come up with a way to bring those imaginary landscapes to life with interactive 3D projection technology. The results are simply breath-taking!

NRF24L01-2.4GHz-HowTo Having two or more Arduinos be able to communicate with each other wirelessly over a distance opens lots of possibilities:Remote sensors for temperature, pressure, alarms, much moreRobot control and monitoring from 50 feet to 2000 feet distancesRemote control and monitoring of nearby or neighborhood buildingsAutonomous vehicles of all kinds These are a series of 2.4 GHz Radio modules that are all based on the Nordic Semiconductor nRF24L01+ chip. (Details) The Nordic nRF24L01+ integrates a complete 2.4GHz RF transceiver, RF synthesizer, and baseband logic including the Enhanced ShockBurst™ hardware protocol accelerator supporting a high-speed SPI interface for the application controller. The low-power short-range (200 feet or so)Transceiver is available on a board with Arduino interface and built-in Antenna for less than $3! See it here.

Electronics : Microprocessors : Arduino Uno output to VGA monitor This post shows how you can output VGA signals to a monitor, turning your Uno (or similar) processor into a "video card". Example: The only extra hardware used here was 5 resistors, and a DB15 socket to plug the monitor cable into: